Whether you’ve seen him on Top Chef Junior, read one of his cookbooks, or dined at one of his Los Angeles restaurants, there’s no denying Curtis Stone’s charisma or culinary expertise

Curtis Stone is a prodigious multi-tasker, keeping balls in the air as a chef, restaurateur, author, and television personality. This year, he took on one more role and added a catering operation to his massive to-do list. Curtis Stone Events launched in January 2018, and he says it’s been a wild ride so far. “I’ve always known I would have a catering company; it’s something I’ve wanted to do for a while,” he says. “After doing a few backyard barbecues and private dinners, it was clear this was the next step. Initially, we just wanted to keep it small, but it’s grown into a full-service catering company quite rapidly.” 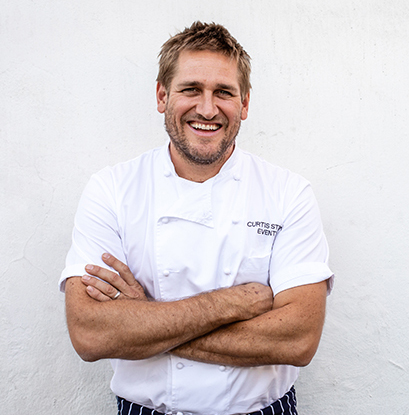 The goal for the new division is clear, Stone says: “We want to be different, filling a niche with something that isn’t currently on offer. We hope to be bespoke and cater to each customer’s needs for the kind of atmosphere they want to create.”

The opportunity to bring my team to this conference is priceless. I know we’re going to gain so much from the time there together, as well as build new relationships. —Curtis Stone

With Catersource 2019 coming up soon, the Curtis Stone Events team looks forward to meeting other caterers, observing industry trends, and introducing said bespoke experiences to attendees at large. “The opportunity to bring my team to this conference is priceless. I know we’re going to gain so much from the time there together, as well as build new relationships,” he says. 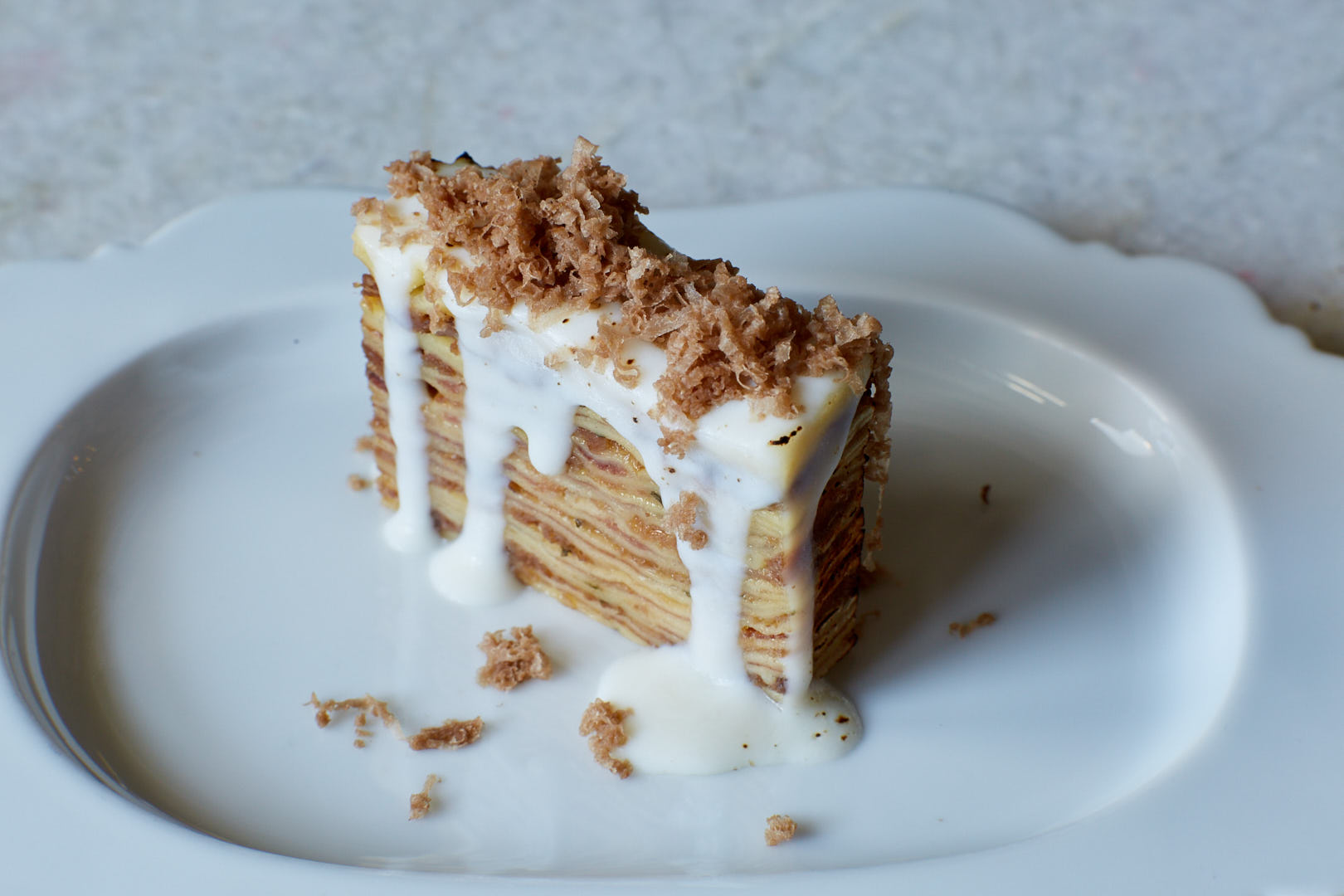 From Down Under to Beverly Hills

His path to becoming one of the world’s hottest chefs required some impressive globetrotting. He secured his first culinary job when he was 18 years old, working for Spotless Catering at the Melbourne Cricket Ground (a contract they’ve held for 36 years). Then, he moved to London and began cooking under the famous—and infamous—chef Marco Pierre White. “I started working at the Grill Room of the Café Royal on the very same day I met Marco,” he says. “This was a place where if you didn’t get fired that day, then you did a good job.” He eventually become head chef at White’s Quo Vadis restaurant.

His first solo restaurant, Maude, named in honor of his paternal grandmother who taught him to cook, opened in Los Angeles in 2014. He’s also running his second Los Angeles restaurant, Gwen Butcher Shop & Restaurant, in partnership with his brother Luke and named in honor of their maternal grandmother who lived on a farm outside of Melbourne. Both restaurants have received premiere accolades and boast experiences well beyond expectation.

Stone, the recipient of the first-ever Excellence in the Culinary Arts Award from the Australian Government, has written Surfing the Menu, Surfing the Menu Again, What’s for Dinner, Relaxed Cooking with Curtis Stone and Curtis Stone: Good Food, Good Life. [Editor’s note: Chef Stone will have a book signing at Catersource. See sidebar for details.]

The very first event for CSE was a “Butcher’s Dinner” for 200, held at a neighboring venue in Hollywood. “We had a charcuterie cart, raw bar, whole-animal live-fire cooking, grill station, and full bar,” he recalls. “We programmed live music, games, and included a really cool retro photo booth. Looking back, we planned an event that seemed too big to achieve right out the gate, but we did it and did it really well. Our team is full of experienced hospitality professionals and I knew from that event we would do great things ongoing.”

But, a major factor in the momentum is being based in Los Angeles, which is an entertainment town, he says. Since that first 200-person event, Curtis Stone Events has run a pop-up restaurant at Coachella, a VIP booth at Arroyo Seco, multiple food & wine festivals throughout Los Angeles, large corporate seated dinners at movie studios, small private dinners in mansions, cooking challenges in the Curtis Stone test kitchen, and private dining events at Maude and Gwen restaurants.

Have a question for Chef Stone? Tailor your lunch and learn experience by providing questions pre-show! Click here to submit your question.

“We’re in our infancy, but we’ve experienced really rapid growth compared to what we were imagining we could do,” he says. “We thought we’d dip our toes in the water and do an event or two, but we’re now averaging two to three events a week.”

Through the process of growing, Catersource became an obvious goal for the team. Knowing the value and reach of the conference, the team wants to take center stage to share more of the experience in leveraging a catering business in light of restaurants and what it means to work for a notable brand. “Our clients have high expectations for us wherever we go because of the brand. We’ve had to hit those expectations immediately and I think it serves as a great lesson to others that you should always perform your best with the goal to give more of an experience than expected,” says Stone. 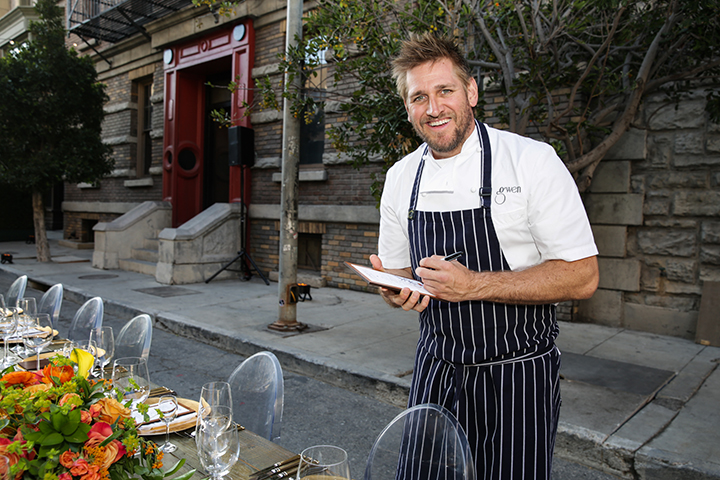 From restaurants to catering

As someone who has been working in kitchens all his adult life, he’s well aware of the hard work required to pull off a perfect event. “We all know that events are notorious for long hours and lots of buildup.”

His advice for other restaurateurs considering adding a catering division? “Don’t be afraid to try it, but you need to be aware that events and restaurants operate very differently. If you don’t realize that, you could be making some mistakes. You must go into it with the ability to adapt as things change in the moment, because you’re feeding 300 people at once instead of 150 throughout six hours. Events are all about problem solving.”

Still, it’s a venture that’s often worth it. “There’s a lot of pressure in the moment, but if you pull it off, it’s incredible. Plus, a catering operation can help cushion revenue on the restaurant side, which certainly doesn’t hurt.” 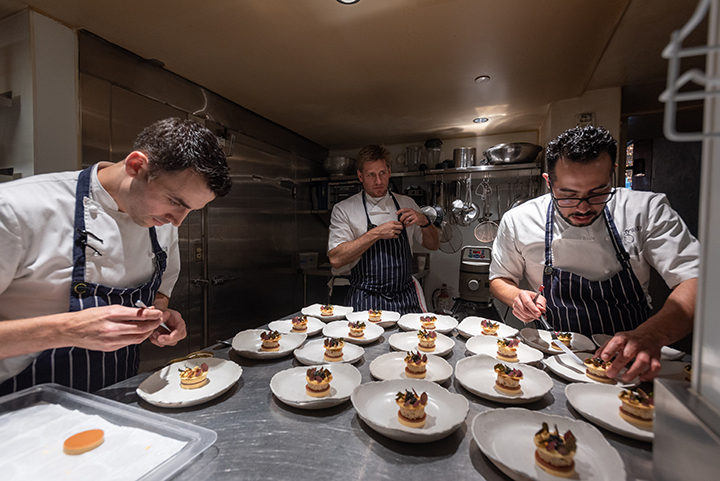 Curtis Stone Events operates in the floor above Gwen, in 8,000 square feet where a lot of the prep and development occur. The butcher shop is below, which is helpful in allowing the team to be nimble, as events are designed to include signature elements like butchery, live fire cooking, farm-to-table principles, and elevated service standards.

“We’re not trying to be the most expensive caterer out there, but we certainly want to be the best and to reach anyone looking for a memorable experience with great food and service,” Stone says. “Our clients love having chef-forward food with fine-dining service in their homes and at their parties.”

When asked to describe his events team, he says, “We’re dynamic and flexible, with great quality and high standards. We’re also a really experienced hospitality team and can take on a wide range of events.” He credits events director Morgan Smith and executive event chef Derek Mattern for contributing to CSE’s growing reputation for elevated guest experiences. “They’ll both be with me at Catersource this year, and we’re all looking forward to meeting you, so find us and come say hello,” he says. 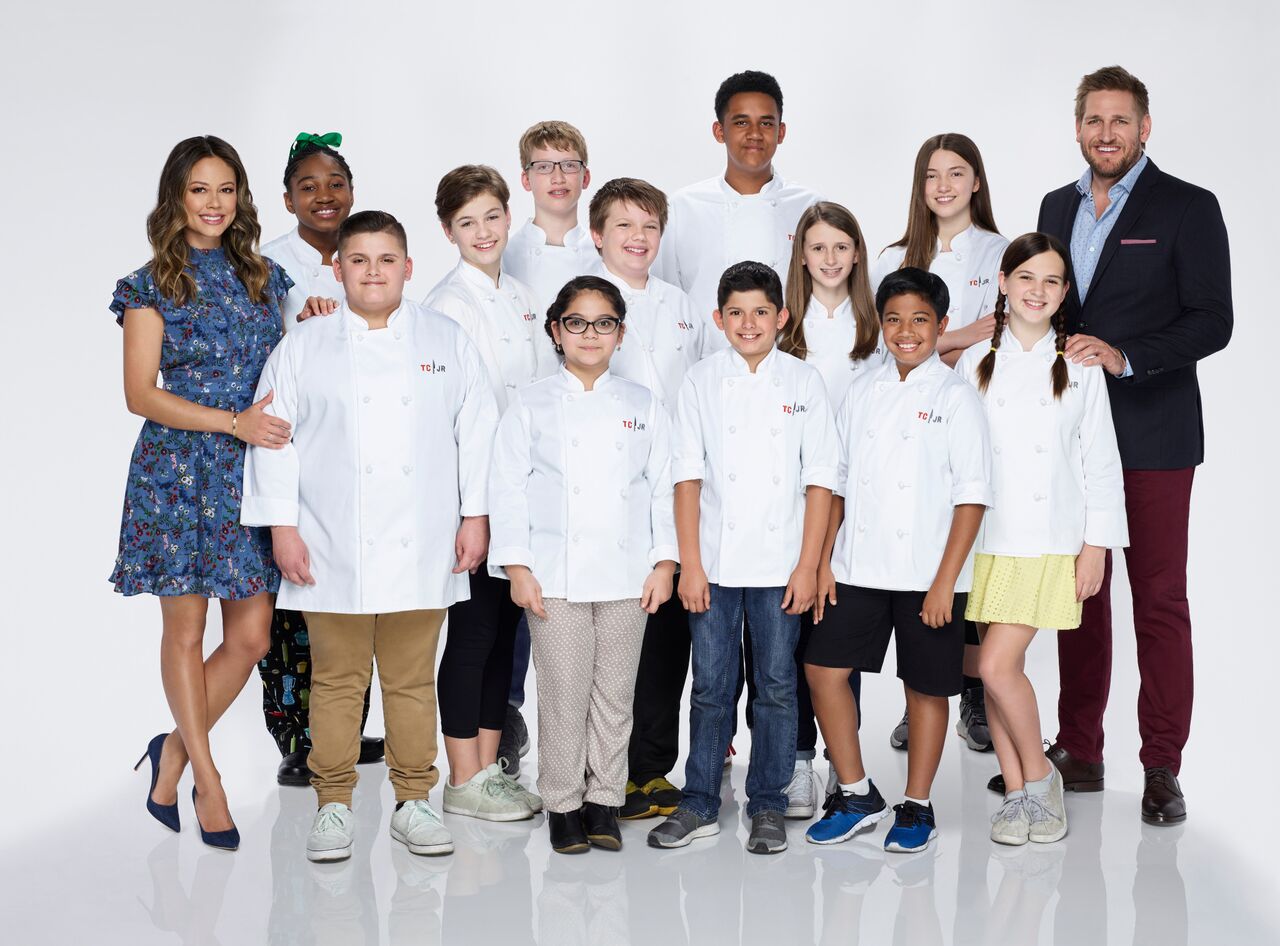 The next generation of chefs

A charismatic personality with plenty of star power, Stone was named one of US magazine’s 11 Hot Male Chefs last year. Many in the U.S. first became aware of him through television appearances, beginning with Take Home Chef. Since then, he’s appeared on many television shows, he’s often seen on HSN, promoting Curtis Stone cookware and appliances, or even at sea overseeing “SHARE by Curtis Stone”, his global restaurant concept aboard three Princess Cruise ships.

He’s now working with the next generation of rising culinary stars as head judge on Top Chef Junior, a program that features cooks ages 9 to 14 who compete in Top Chef-style challenges like Restaurant Wars. “Top Chef is the original culinary competition show—it's been so successful, and everybody loves watching it," Stone says. “Applying all of that to the kids has been fun, because they respond to it really well. All the Top Chef Junior contestants are cooking their hearts out on the show.”

A father of two young boys, Stone says he’s impressed with this next generation of chefs. He and the contestants have been able to connect over a mutual love of food. “Ever since I was young, I've always been fascinated with food, whether it was making marmalade with my Nan and Grandad or fudge with my Granny,” he says. But he acknowledges that things have changed: “I’m in awe of how much these young people have technology on their side. I learned to cook from my mum, gran, and a few cookbooks. These young, self-taught chefs are growing up with YouTube, and they learn so much through that medium. I can’t wait until they’re older and I can hire them in my kitchens!”

What’s next for the star-powered chef? “My forecast for Curtis Stone Events is more.” Stone says. “We’re super passionate about the events industry and we want to keep going. We have an ambitious team pushing us forward, so the sky is the limit.” He mentions that the company is already outgrowing its kitchen space and will likely expand into a commercial kitchen soon. “I’d have to say that we’re in ‘full steam ahead’ mode, and we’re ready for more. I’d love to do more work with studios, music labels, award ceremonies, and productions in 2019.”

If Chef Stone’s not catering your next event, you can catch him on his upcoming new show, Field Trip, documenting his culinary research trips around the globe with his restaurant team, expected to premiere in mid 2019.

Curtis Stone Events turns one in January 2019, so he says he’ll be attending Catersource to learn as well as present. “I’m going there with my eyes and ears wide open, because I know I have lots to learn,” he says.

In conversation with Catersource Advisory Council member Ingrid Nagy of By Design Collective, Stone will discuss the 2018 launch of Curtis Stone Events (CSE), the success of his Los Angeles restaurants Maude and Gwen, and how he’s maintaining the quality and integrity of the restaurant hospitality experience.

Chef Stone will circulate during the Monday afternoon networking break from 2:30 to 3:00 and will have a book signing on Monday, directly after his lunch conversation at 1:15, outside Great Hall A.

What’s for dinner? A Chef Stone menu, that's what!

With the help of chefs from his team, Curtis Stone has developed a menu and then will prepare dinner service and introduce each course at the Spark! Awards gala on Monday evening, starting at 6:30 p.m. at the E. Morial Convention Center in New Orleans. “I promise you that the dinner will be fabulous. I want people to leave thinking, ‘How on earth did they do that for so many people?’ We will definitely push the boat out on this one.” [Editor’s translation: “push the boat out” is Australian lingo for “give it our all.”]

This is a ticketed event. Click here for more information.