Andy Arndt is the executive chef at Newport Beach Marriott Hotel & Spa in Newport Beach, CA leading a team of, by his estimation, 42 cooks and 10 dishwashers. “It’s pretty amazing, but it’s not for everybody,” he says of his position. “I have a lot of friends that think I’m crazy for doing this. The amount of stuff that we do, the amount of food we go through? It’s phenomenal.” 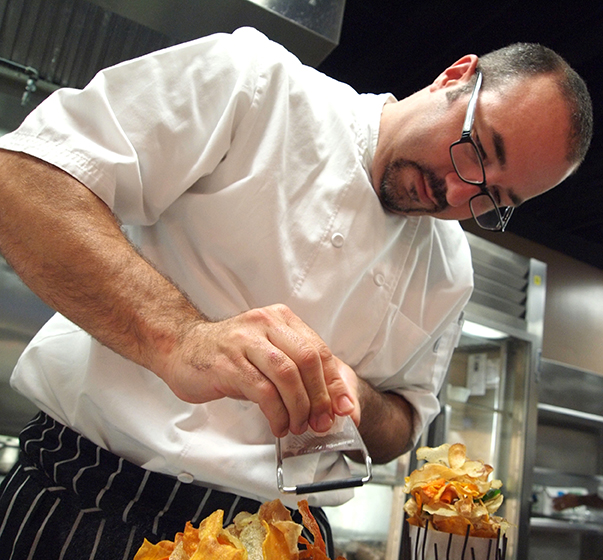 Chef Arndt has had a bevy of work experience on both coasts that helped propel him to this point in his career, including time at free-standing restaurants like Thomas Keller’s famed French Laundry in the Bay Area, Tom Colicchio’s Gramercy Tavern in NYC, and hotel properties such as New York’s Rihga Royal, plus one of the top resorts in the continental U.S.: the Ojai Valley Inn and Spa, where he was responsible for the food program as executive chef.

Named a Star Chef for his work at Aquariva at the Avalon Hotel & Spa in Portland, OR, Arndt is now just about a year into his position in Newport Beach, and loving it. “You’ve probably heard that it’s a challenging position [being an executive chef]. You have to have multiple balls in the air, or however you want to phrase it. It’s very different from a free-standing restaurant. There’s never a dull moment—it’s really exciting to see the amount of things going off when you have several parties of 300 going on, one outdoor and two indoor parties, plus the restaurant, room service, and lounge. When it’s going full capacity, it’s pretty amazing to be at the helm of all of that.”

Offering sweeping views of the Pacific Ocean, the property recently underwent a $70 million dollar transformation with 40,000 square-feet of indoor and outdoor event space, ideal for weddings and receptions, as well as 532 newly redesigned hotel rooms. Its Grand Pacific Ballroom has a maximum capacity of 1,000 people.

What’s the trend in hotel catering, in Chef Arndt’s opinion? Menu matching. “During the week,” says the chef, “it’s anywhere from 60 to 300 persons a day, multiple parties.” To that end, the sales team tries to ‘match’ the menu for the day. “If you’re doing three of the same plated or three of the same buffets or breakfasts, it really makes a difference,” Arndt explains, about menu matching. Labor quality is huge. “It also cuts the cost dramatically and then you can focus on making the best possible products. [Otherwise] you have an order for six or seven different lunches all at one time and of course you still put the love into it. But when four out of the six catered events are the same it definitely makes the bigger picture better. The guests are happy, the service—the whole thing goes so much more smoothly.

“It mimics the season and offers quality ingredients,” says Chef. “If the group coming in doesn’t want to do that, then they pay a premium. There are a lot of properties moving toward that kind of selling.”

This strategy seems to be working well, as Chef Arndt points to revenues reaching one million dollars a month.

And yet, there are issues that need to be addressed when working to achieve that golden seven-figures each month. “The biggest issue for us is food cost,” says the Chef. “But they’re pretty open here,” he says, about how he must hit those numbers. Chef Arndt explains that the last few years have revealed a sweeping program change for the Marriott brand that allows chefs to come in and address the costs in more satisfying and creative ways. “There’s a percentage of local now, which is a big hot button. For instance, what makes my hotel, my food say Orange County, as opposed to if I were in Texas—it should be what’s local or even hyperlocal there.”

Of course there are always a few staples on the menu, the chef notes: “the Club, the Caesar, and the burger I can’t touch—that’s a Marriott staple; but I can also put my own burger on, I can put my own sandwiches on, I can do my own spin on things. The items that have to be set; it’s maybe three percent that are staples.

“It was kind of exciting,” he continued, “to go in and take probably 90 percent pre-made items down to about 20. [I really enjoyed] teaching, learning, and showing the staff that we can make this dressing; you can do these things without buying them. The excitement level was huge, the demeanor of the staff changed so dramatically when I [told them] that I was going to teach them how to make these things, and [they will be] better than what the company may have [previously] bought. And it saves the Marriott money too.”

In sunny SoCal, events outside are the norm, and Chef Arndt has plenty of options at his disposal for grilling within his three outdoor venues. “Here we do a lot with la planchas or Evo grills, also open-fire cooking. Definitely a big play on Spanish, and then either heavy-duty Mexican-style cooking or doing something more al fresco like Spanish or Italian over a grill. We’re using good wood or charcoal, very straightforward, with a really clean marinade.”

With la plancha cooking, Chef Arndt prefers “just a really good sear” on top of an authentic marinade or a quick rub. For the featured recipe, Vegetable Ash Roasted Australian Ribeye & Blue Cheese Butter with wild mushroom cracker and breakfast radish, Chef notes, “I was trying to think of that beautiful meat and enhancing the flavor with an ash rub and kind of playing with it so that it’s more a lighter version of an older-style dish.” He uses a cast iron pan for his sear, in this instance. 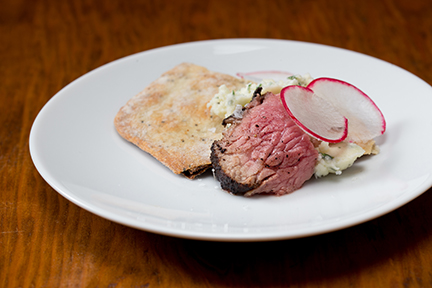 He explains that the smoky vegetable ash brings a kind-of “mushroomy-umami” flavor profile and the blue cheese butter puts a touch of fat on the plate. The crispy crackers, which he makes in various sizes from small to plate-sized, add yet another flavor in a lighter way than a traditional mashed potato might. Finishing the dish with the radish garnish “straightens it out” and breaks up the buttery taste.

“It’s a great hotel and the company is really behind the chefs,” says Arndt. “Last year was really refreshing to be able to make the numbers and to charge accordingly, to get the ingredients, and to keep up with free-standing restaurants.” Arndt stresses that his aesthetic leans toward the minimal, “I don’t do crazy garnishes that don’t make sense. I’ve cleaned up the whole banquet department so that things make sense. We don’t offer crazy huge plates; we’ve really shrunk that down. It’s more manageable.”

Manageable, that is, until the inevitable curveball strikes: Arndt mimics a potential client query he received, and laughs: “‘Well, I had it in this restaurant and I really liked it and can you make it for 600 people?’ We’re like—whoa, OK!”

Wash, clean, and dry the vegetables. Place all ingredients on sheet pan with silpat or parchment, cook at 350º until dry and black. Remove, cool, and place in a blender, sift in chinois, reserve.

1. Mix dry ingredients then add wet. Refrigerate for 45 minutes.
2. Roll into sheets; cut and fold. Have fun and use a pastry tool to create a wood grain look. Sprinkle with finishing salt.
3. Bake at 425º on silpat for 6 to 8 minutes; remove and let sit at room temp.
• If you make two batches and use different flours, you can weave the cracker with alternating colors for a more unusual look.

Mix all ingredients, use salt & pepper to taste.

Ribeye
1. Cut one whole ribeye into baton or large block. Salt & pepper each baton. Roll each in the vegetable ash to cover completely.
2. In a cast iron pan on high heat and greased with a light canola oil, sear each side of beef and roll from side to side.
3. Remove and place on a resting rack; then cook at 350º for 8 minutes, remove and let rest again.

Assembly
1. Break crackers into 1.5 x 2.5 inches, roughly and then spread with about 1 Tbsp blue cheese butter for each serving.
2. Slice thin ribeye medallions about 1.5 inches thick and place on top of the cheese.
3. Slice radishes into thin garnish and finish with fresh cracked pepper.

While the food from Chef Arndt’s kitchen is plentiful, here is a look at some of the dishes currently on the menu that guests prefer over and over again. 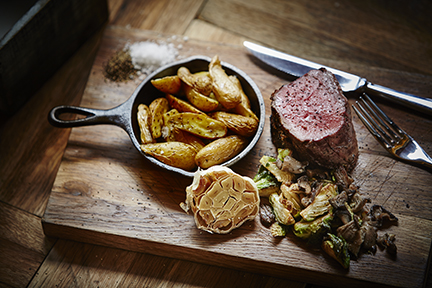 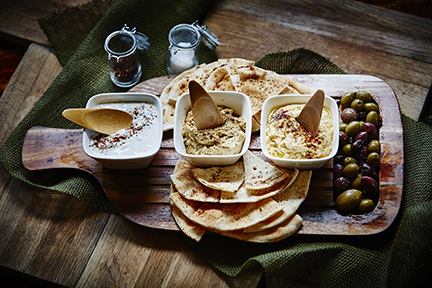 Mezzo plate with trio of dips, crackers and olives 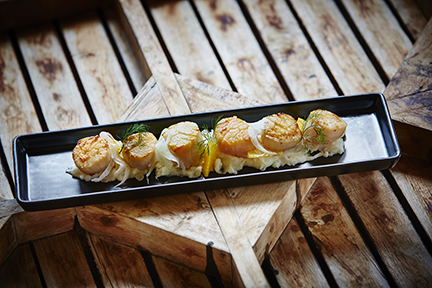 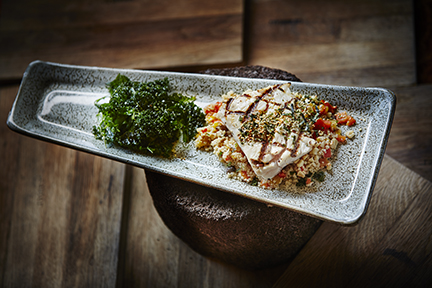