If you want to know more about the future of food, you should probably start by looking backward, says Sean Sherman. A member of the Oglala Lakota tribe, Sherman has branded himself as The Sioux Chef, and he has been spreading the word about a way of eating that takes its cues from the diet of indigenous North Americans in the pre-colonial era. It’s a culinary style that places emphasis on fresh, seasonal, foraged, and wild ingredients. Even though it’s a way of eating that has thousands of years of history behind it, it’s incredibly relevant for today’s diners, since indigenous food is naturally free of gluten, dairy, and refined sugars. And it’s a foodway that’s been gaining more attention and interest, not only from culinary professionals but from eager diners who want to know more about this style of cuisine. 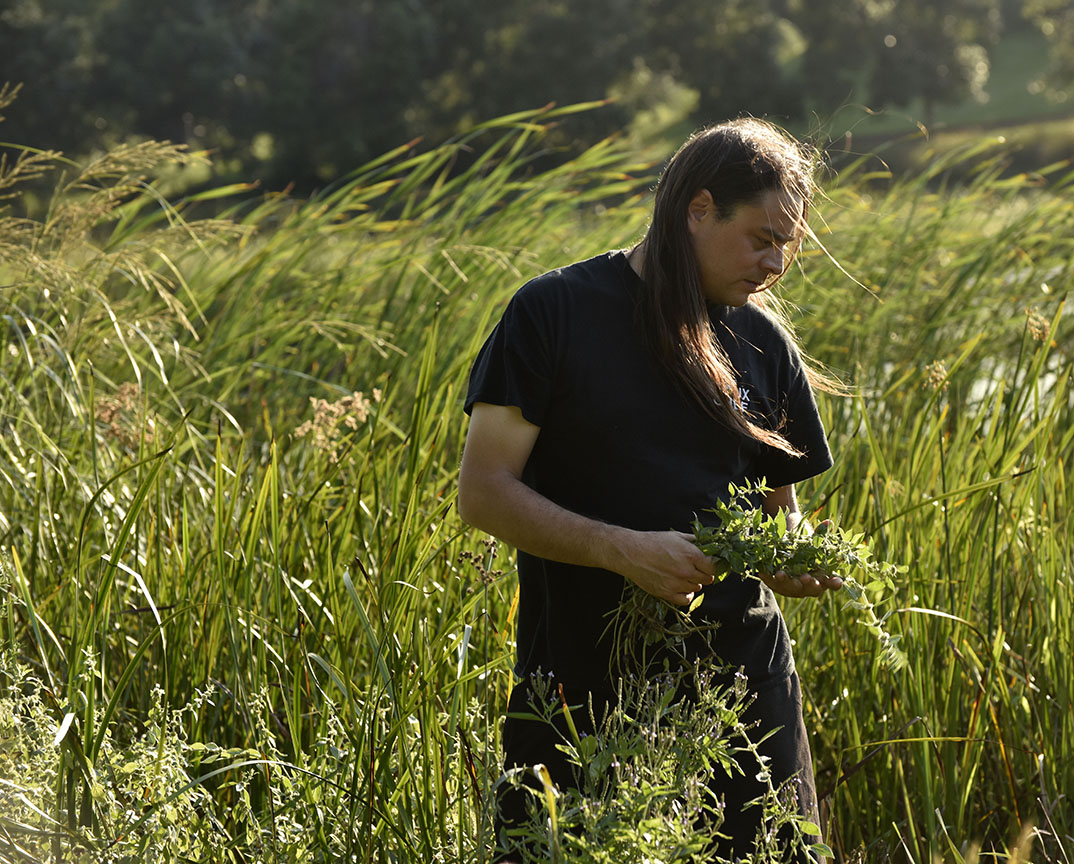 Sherman established The Sioux Chef four years ago as a Minneapolis, MN-based catering and educational enterprise focused on pre-contact foods of the Oglala-Lakota, Dakota, and Ojibwe tribes. Since then, he’s amassed something of a culinary empire, making an impact nationally and internationally. His cookbook, The Sioux Chef's Indigenous Kitchen, won a James Beard Foundation Book Awards for best American Cooking book in 2018. He’s launched NATIFS.org, a culinary non-profit that will operate indigenous food labs nationwide. And he has plans in the works for two brick and mortar restaurants in Minneapolis, one to open in 2019 and one slated for 2020. He’s a culinary media darling, with a travel schedule that keeps him always on the move. (In 2018, he made appearances in six different countries and 18 different states, plus a recent appearance on CBS Sunday Morning’s annual Food edition this past November.)

“I had worked in restaurants and catering before, but when I started catering as The Sioux Chef, I found something different. Whether I was serving was 12 people or 300, they always would want to hear about the food they were eating and the stories behind it.” —Sean Sherman

From the beginning, his catering operation has been out of the ordinary. “I had worked in restaurants and catering before, but when I started catering as The Sioux Chef, I found something different. Whether I was serving was 12 people or 300, they always would want to hear about the food they were eating and the stories behind it,” he says. “It showed us that people really were interested and wanted to know more, which in turn gave us an opportunity to educate people about our work and vision.”

His 2019 restaurant will be steps from the banks of the Mississippi River in the North Loop area of Minneapolis, home to other essential restaurants, such as award-winners Spoon and Stable, and The Bachelor Farmer. But this area means more to Sherman than its red-hot address, as the water of the Mississippi is also a sacred Dakota space. “It was and still can be a place of profound spiritual power and inspiration for Indigenous people,” he says. “We look forward to illuminating this beautiful history by helping with classes, music, native plants, as well as a completely decolonized menu for people to enjoy and learn from.”

Sherman began his culinary career at age 13 at The Sluice, after his family moved from the Pine Ridge Reservation to Spearfish, South Dakota. He never stopped working in restaurants, eventually moving to Minneapolis to continue working in kitchens and becoming executive chef at La Bodega Tapas Bar in 2000. [Editor’s note: Now I know why I loved that restaurant so much! Sean was in the kitchen!]

His catering operation began on a shoestring. “I wasn’t set up that well, and I didn’t have a lot of money set aside to try to start a business,” he says. “It was just me doing everything in the beginning.” He now has a team of 12 full-time employees, and more part-time employees as needed. “We’ve been pretty busy, so it’s been good,” he says with characteristic understatement.

While he does maintain a standard catering menu [sioux-chef.com/catering], The Sioux Chef also creates many customized menus. “We’re really all over the board in terms of our customers and what they want,” he says. “Some are high-end, some are family style, some are buffets. We do luncheons and breakfasts as well as evening events.” Animal proteins include bison, venison, rabbit, turkey, duck, quail, and freshwater fish. There is a strong emphasis on plant-based foods, including heirloom corn, beans, squash, sunflower, amaranth, and wild rice. “I’m especially interested in the wild foods that are directly around us, like cedar, bergamot, hyssop, wild ginger, and berries. I love to season with trees like cedar, pine, spruce, and tamarack, making teas and stocks out of them. “ 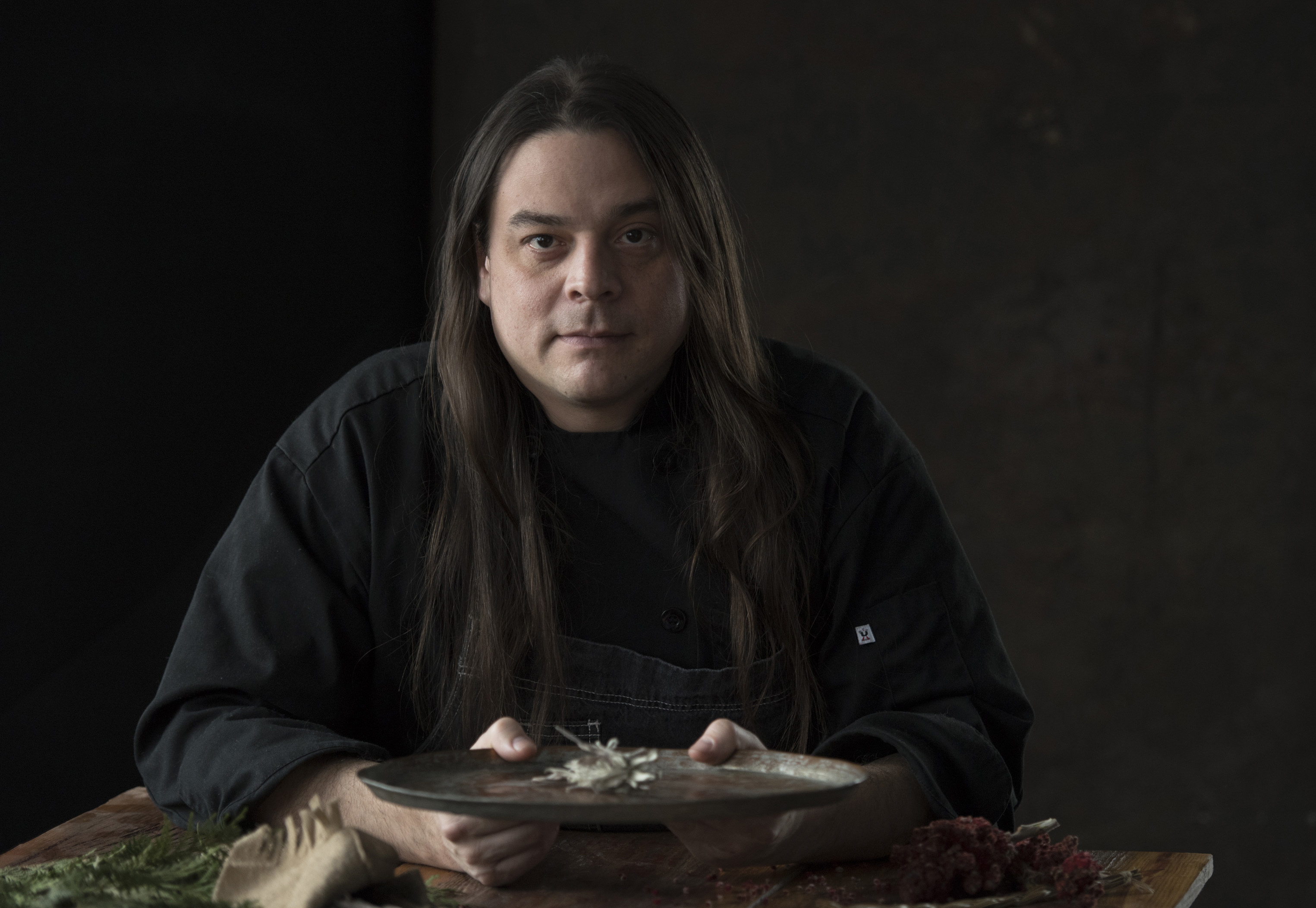 Sherman says that, like any small business that has experienced rapid growth, “we’ve learned some lessons along the way.” He says he and this team have made an effort to have consistent menus and recipe books. “Catering is all about consistency, timing and quality, so that’s what I’m always pushing for. And you always have to care about where your ingredients come from.”

He notes that The Sioux Chef has never once paid for any advertising or marketing. “We’ve been smartly using social media, and we have large followings on Facebook, Twitter, and Instagram, which have become great platforms for us,” he says. All members of the team tackle posting, with Sherman and his partner, Dana Thompson, being the largest contributors. “We’ll do Facebook Live when we’re at a big event, showcasing tons of plates. We have a lot of adventures, and we get feedback from people who say they enjoy following us as we do all sort of interesting things in different countries.”

While he understands that not everyone has a concept like his, he says that every caterer can come up with ways to stand out in the crowd. “And be sure to support your local economy to keep food dollars in your community,” he urges.

Looking back, thinking ahead

While he acknowledges that he’s done very well in a short time, he says that indigenous foods should have been part of the mainstream of American cooking from the beginning. “We think we can offer a more authentic sense of real American food, helping everyone to understand the backbone of the land and how people lived for thousands of generations before Europeans ever showed up. We’re celebrating our wonderful diversity from an indigenous perspective.”

He foresees a future when The Sioux Chef will become more of a social enterprise. “I want our labs and training centers to be all across the country, and into Canada, Alaska, and Mexico,” he says. “We will be open to the public to teach about indigenous foodways, gardening, foraging, and food perseveration. And we’ll work with regional tribes to help them launch small businesses, everything from catering to full-service restaurants. We want to normalize indigenous food and help everyone gain a deeper sense of history, no matter where they’re standing.”

Monday February 25: Presentation at Art of Catering Food, the first half on nutritional literacy and the second involving a demo and tasting.

The Catersource Bookstore will feature Sean Sherman’s James Beard award-winning cookbook. A signing will be held on Monday, February 25 at 11:35.

Says Sherman about the process of creating his book, “The cookbook has been an awesome tool for helping people understand the mission of our company. It also has over 150 recipes featuring all pre-colonial ingredients to show people how easy this food is. Beth Dooley (co-author) and I started by talking through my history, my initial research, and why I wanted to pursue this. We kept track of recipes from all the dinners we did, and from how our catering menu was evolving. It took about two years, start to finish. My partner, Dana, who manages me, scheduled time several times a month to work with Beth, sometimes remotely. We documented our work through pictures at events, as well as menus and note taking while traveling to native communities.”