Top Trends at Catersource & the Art of Catering Food

The conference and tradeshow may be over, but inspiring trends shown at Catersource, the Art of Catering Food, and seen on the tradeshow floor at the Morial Convention Center will live on throughout the year and into 2018. Let’s take a look at some of these prevalent catering and event trends and how you can incorporate them into your business.

Action stations have come a long way from the stainless steel chafers of the past century and early “Love Boat” cruise ship all-you-can-eat buffets, said chefs Todd Annis and Dustin Claypool of Bold American Events, in their Lights, Camera…Action Stations! presentation. “Round” said the team, “is the new straight” for optimal flow with chefs right in the middle to facilitate the food—and entertainment. 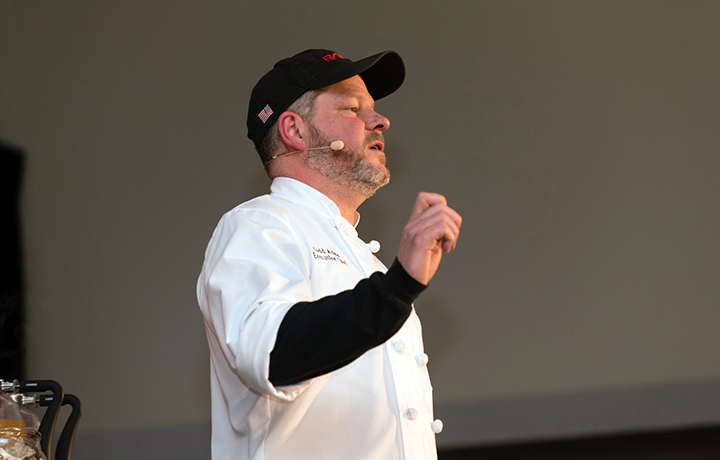 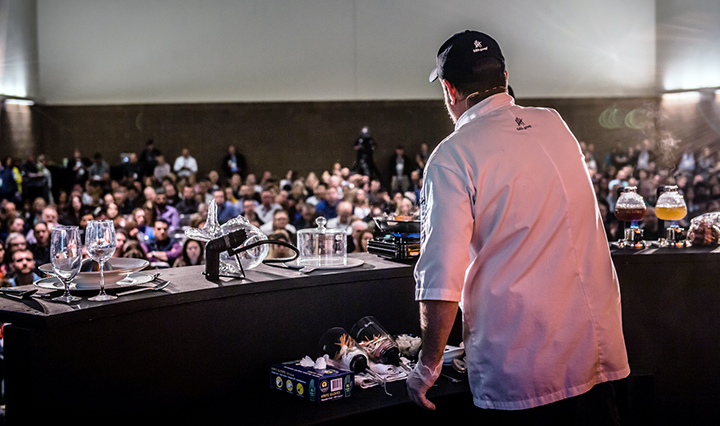 Chefs cooking while also educating guests about ingredients and sourcing is part of the allure, but there is more: elements of fire such as “smoking” stations, small torches wielded to brûlée and brown everything from desserts to sushi, and controlled sauté pan flames that draw the eye offer entertainment value.

Vertical buffets and stations are also gaining in popularity, offered David Merrell in his Creative Engagement Environments seminar, be it the ever-prevalent doughnut wall or tiered to hold multiple desserts in a small amount of space. 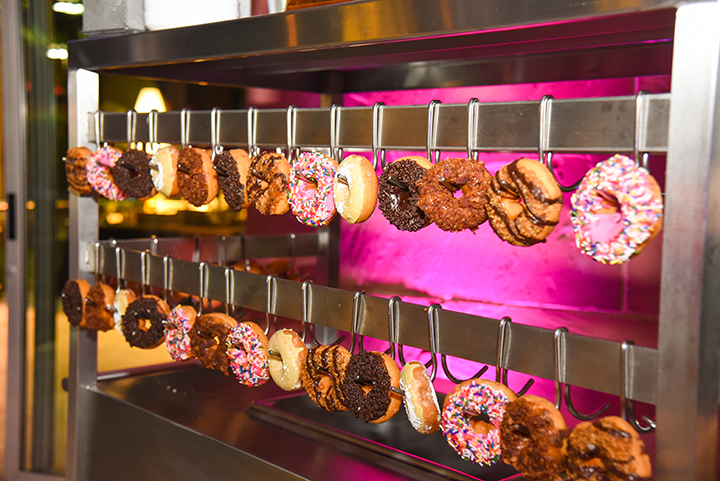 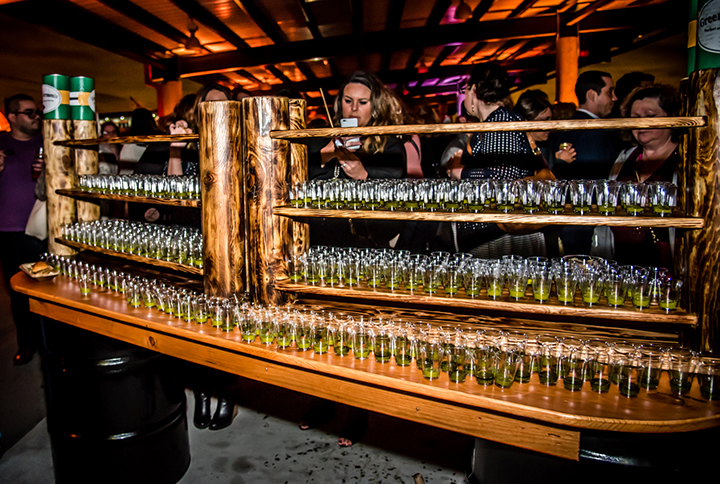 Regarding desserts, executive pastry chef Bonnie Kravitz, Daniel et Daniel, discussed the allure of the interactive dessert station in her AOCF session, Dancing Desserts. “Putting on a show for your clients,” said Kravitz, “gets your customers feeling involved, choosing ingredients and watching how things are made. It makes for a fun and interesting way to end a night!” But remember, providing too many choices can back up your station, especially at larger events, she said. “So, make some product ahead: some ready to go and also some being made on site.” 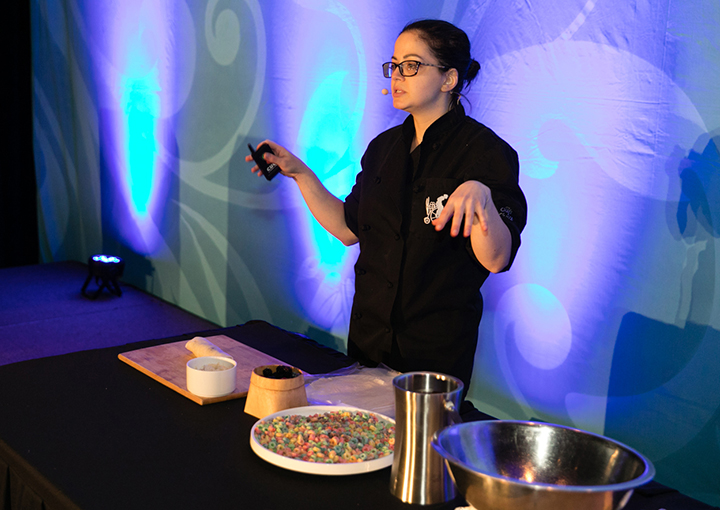 Justin Davis said it most succinctly in his Capitalizing on Food Culture session at Catersource: “We are in the midst of a genuine cultural revolution, and food—including growing, distributing, eating, preparing, and sharing—is at the core of it.”

What are these trends in our food revolution? Let’s take a look.

There is ever-increasing interest in the role food allergies play in today’s culinary and catering world, for example. The role is no longer that of supporting player, but leading lady.

In Rachanee Teipen’s class, You Can’t Eat What?! she discussed the prevalence of the “cult of wellness”: food allergies such as gluten, dairy, nuts, and soy but also personal cuisine choices such as vegan and vegetarian fare. “What types of dishes can you incorporate into your menus,” she asked the audience, “that can attend to a variety of client requests simultaneously, making menuing and service easier?”

To answer that question, she provided ideas and recipes from some of her colleagues throughout the US and Canada, as well as some of her own. 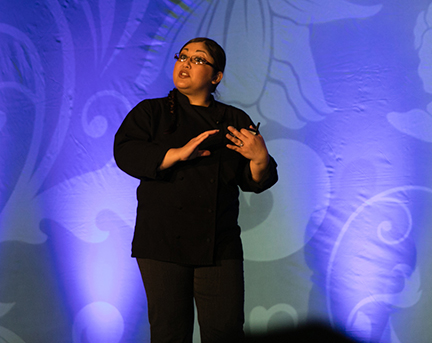 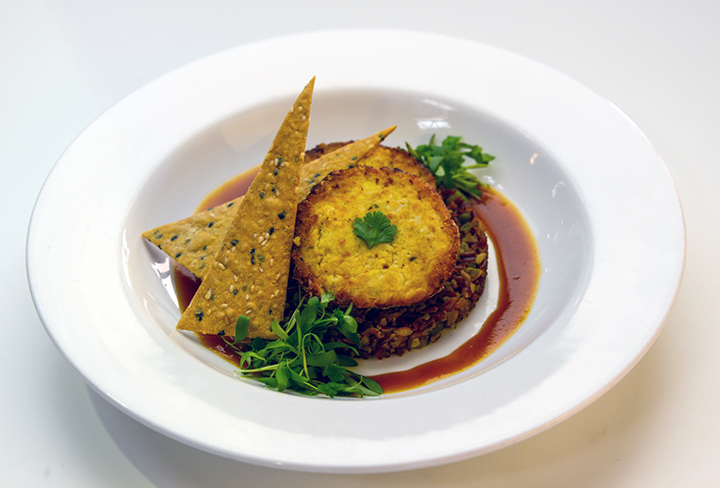 Bonnie Kravitz also tackled the topic of food allergy in her Catersource session Sweet Sensations: Allergen Friendly Desserts, noting “the number of people with peanut allergies has increased by 50% since 1997. The number of people who eat a gluten free diet was one in 2500 a decade ago. Today, it is one in every 133.”

Food waste and the zero waste kitchen is another food culture hot button. A variety of chefs spoke to this concept, none more eloquently than chefs Keith Lord and Heather Carr in their Upcycling & the #nowastechef session. Literally taking what others might consider trash or compost and turning it into something tasty, the chefs dazzled the audience with details—and followed the information up with delicious samples crafted from kitchen scrap.

Molecular gastronomy, still going strong, was covered in both Renee Miner’s Molecular What? class for those just beginning to experiment, and in Bonnie Kravitz’ Dancing Desserts class. Said Kravitz in her aforementioned session, liquid nitrogen (a method of rapid freezing) stations have been very successful, such as build-your-own ice cream sandwiches and additionally, Reverse S’mores (tiny s’mores with customizable marshmallow flavors, dipped in liquid nitrogen). Click here for Bonnie Kravitz’ Reverse S’mores recipe from her Art of Catering Food session. 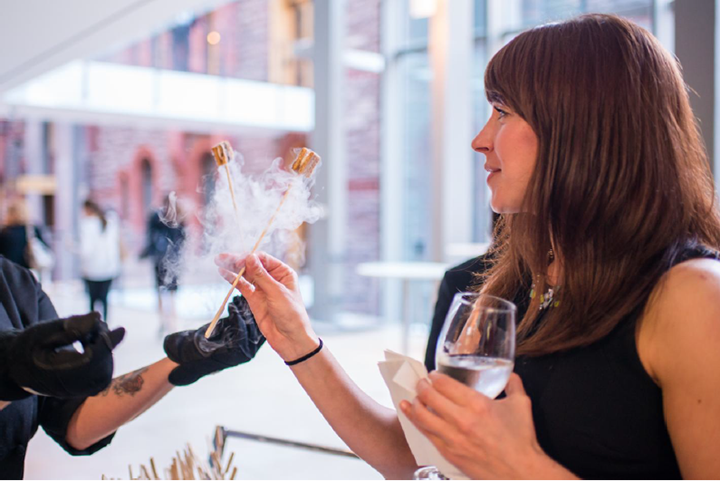 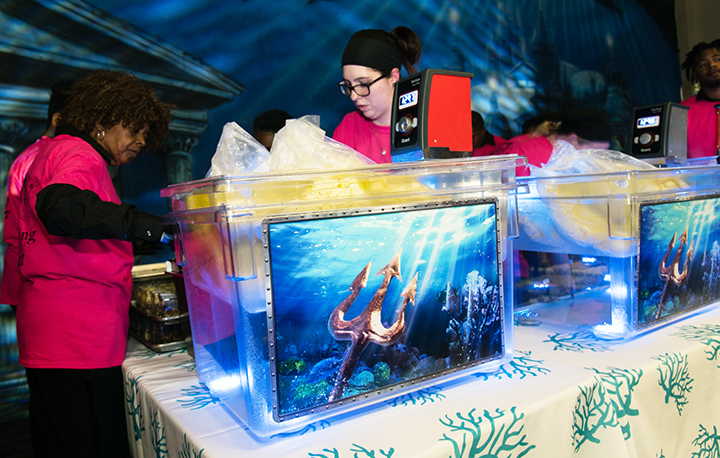 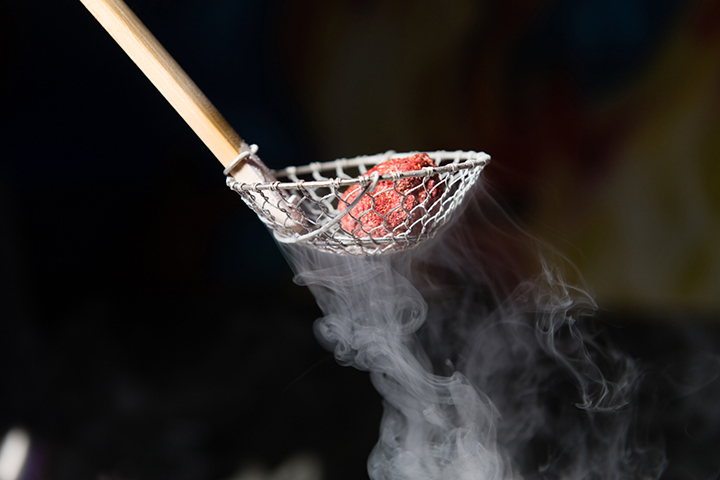 ...and also spherification (shaping a liquid into a sphere or an orb), edible paper (a potato or soy-based paper paired with edible ink), popping sugar (such as pop rocks) and more.

Interactive beverage services and experiences, house bottled beverages, craft ice and other icy vessels, but especially—specialty cocktails for events of all kinds are still hot, hot, hot. At the first annual Catersource Cocktail Competition on the tradeshow floor, four caterers went head to head in order to put together the best “mini” bar program using three different spirits, one for each round: the very trendy Tiki beverage (rum), a crowd pleasing vodka cocktail, and finally, an end of the night sipper (bourbon). Jeff Selden, of Marcia Selden Events and Catering put together this beauty of a vodka cocktail, perfect for spring. Check back on catersource.com throughout the summer and fall season, as we unveil the rest of the recipes and talk cocktail trends in greater depth. 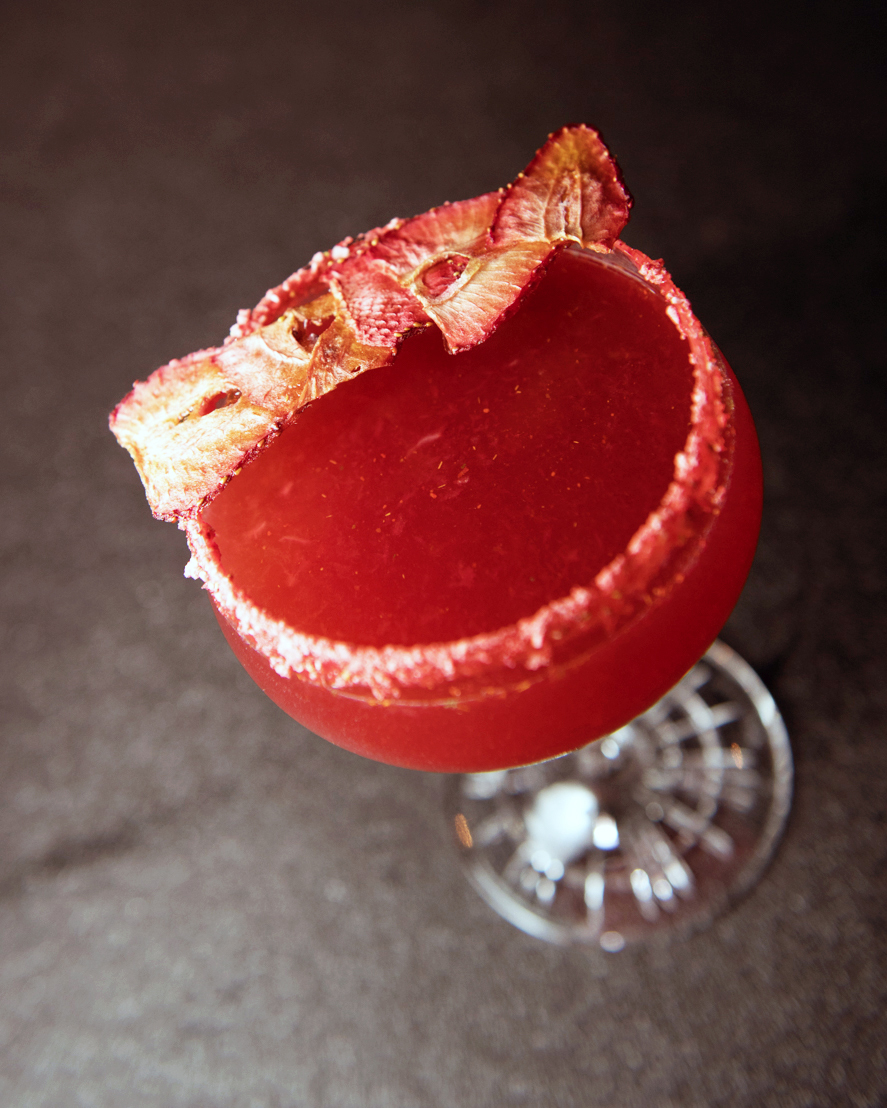 The rise of corporate catering

Recognizing the rise in drop off delivery and business dining (as noted in our State of the Industry piece in January 2017), Catersource held a half-day seminar program to better identify independent caterers’ competition (independent restaurants, franchised caterers, and restaurant chains, for example) and how to create a competition-proof business. Those who attended Michael Rosman and Michael Attias’ various sessions learned how to assess presentation and set-up variances between competing companies; how portion sizes can affect the final product (pick apart a variety of competitor’s sandwiches and weigh the proteins, for example); packaging and visual appeal; and finally, assessing how competitors follow up after the order has been fulfilled.

CORT put together mixed use seating for one of the Catersource seminar rooms on the second floor, with comfortable upholstered chairs mixing in with sofas, tables, and other back of the room arrangements. 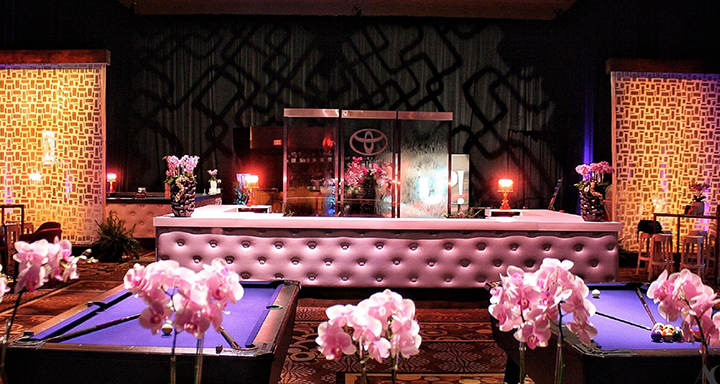 An example from David Merrell: a hospitality suite

Merrell also acknowledged the Pantone Color of the Year—Greenery—and cited Pantone Color Institute Executive Director Leatrice Eiseman, who stated it “provides us with the reassurance we yearn for amid a tumultuous social and political environment [and satisfies] our growing desire to rejuvenate and revitalize, [and] symbolizes the reconnection we seek with nature, one another, and a larger purpose.” 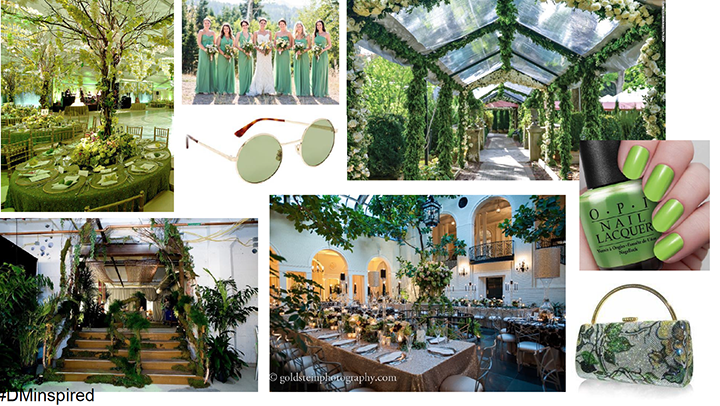 Greenery, as interpreted by David Merrell

Cynthia Lopell, in her Massive Designs that Travel Small, discussed the guest journey at an event, noting the importance of a themed thread throughout every designed location, the “yellow brick road” to each experience, and the importance of the WOW.

Finally, the ever-popular Joe Mineo presented an eye-popping look at event execution, detailing a variety of show stopping events and how audience members could “take these ideas, and make them your own with just a little tweak.” Want some inspiration? Here are a few images from his presentation: 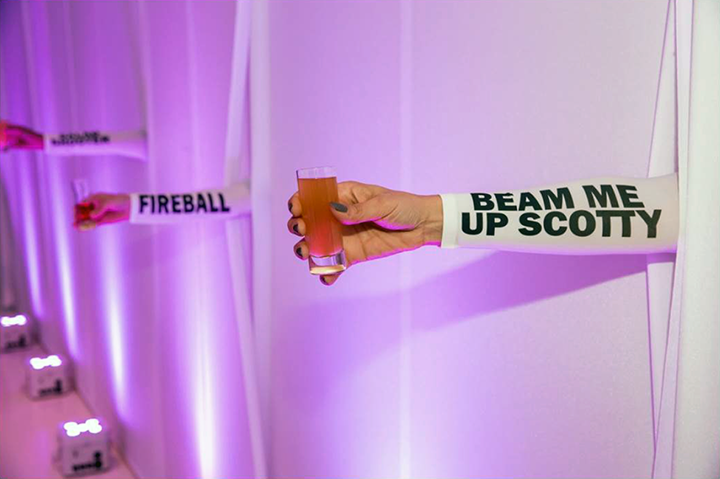 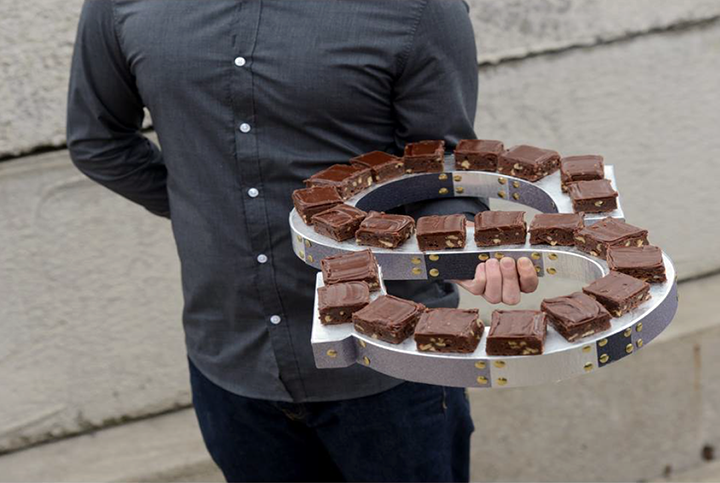 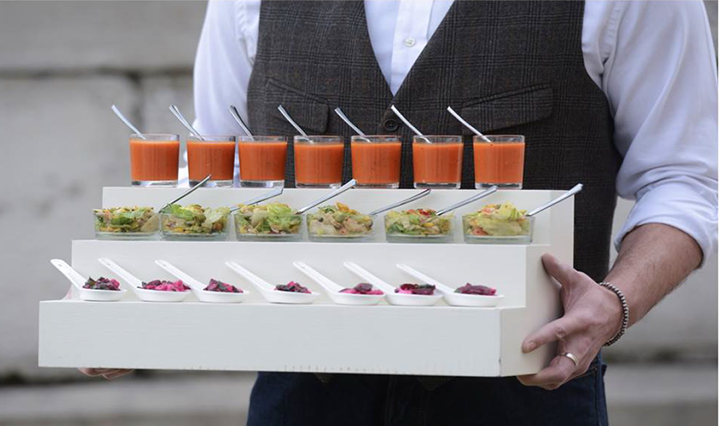 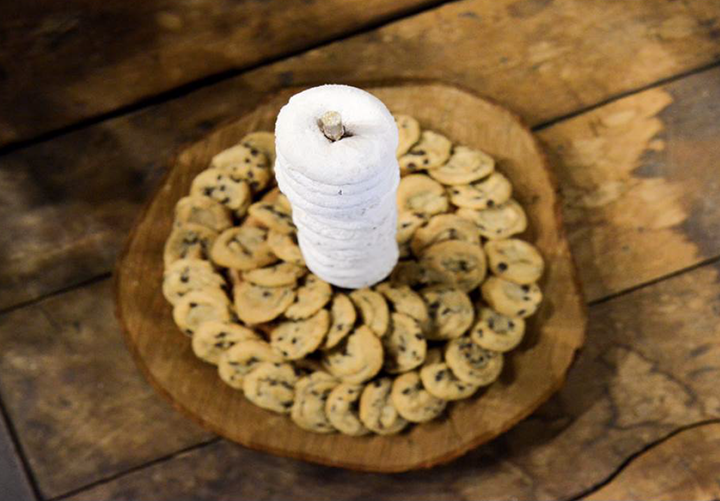 Keep returning to Catersource.com as we discuss additional trends seen at Catersource and the Art of Catering Food and also click on the link below to sign up to receive additional e-newsletters delivered directly to your inbox each month!

Kathleen Stoehr is the Director of Content & Education at Catersource.