A Business … on Fire

Children everywhere dream about becoming fire fighters when they grow up. But does anyone ever dream about becoming someone who feeds those fire fighters? It may not be the heroic stuff of newspaper and television coverage, but the work done by mobile catering crews from Phoenix-based M Culinary Concepts is vital to keep blaze battlers well-nourished and ready for action.

During the cooler months, M Culinary Concepts’ President Brandon Maxwell’s business is focused on catering both private events and major public gatherings such as the Fiesta Bowl, the Waste Management Phoenix Open, and the Barrett-Jackson car auction. He employs 100 salaried managers, 250 full-time and more than 1,000 part-time employees. But when the Phoenix heat brings a summer slowdown, his business focus turns to servicing the catering needs of Western fire fighters. What started as an off-season strategy to keep the company busy and employees earning a salary is now a healthy contributor to the company’s bottom line.

After meeting with, teaming up, and finally partnering with representatives from Houston’s Trail’s End (which runs a similar service based in Kenab, UT), Maxwell undertook the arduous process of becoming a contractor for the National Interagency Fire Center, a division of the U.S. Forest Service, which is itself a division of the U.S. Department of Agriculture. Just reading the names of that many government agencies probably gives you a good idea of the level of complexity and detail required to be awarded a bid, but Maxwell was persistent in dotting the requisite i’s and crossing the necessary t’s. In 2002, he was awarded his first contract; his contract has been renewed every year. The current contract runs from June 1 to September 30 for dispatch locations in Salt Lake City, UT and Idaho Falls, ID.

Whenever a fire erupts in one of the locations within his dispatch area, Maxwell is instructed where and when to send his full-service units. He has one 11- and one six-truck convoy, each with all of the equipment needed to run a full-service, from-scratch kitchen, including convection ovens, deep-fat fryers, and even a washer and drier to launder mobile catering crew uniforms. “I can’t think of a more extreme experience in our industry,” Maxwell says. “Sure, you may have a difficult client or a bride from hell, but at least that situation is a scheduled one. With this contract in place, whenever they call, you have to get moving and be in the agreed-upon location and to start serving meals at the agreed-upon time.” 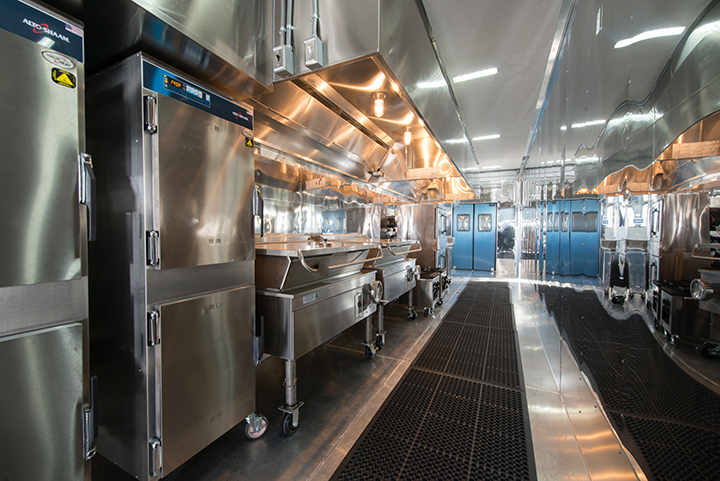 Want to get a video tour of one of M Culinary’s trucks? Click here!

“We once got into a situation where the number of fire fighters showing up was growing so fast that we didn’t sleep for three days. You’ve got to be okay with whatever happens, and just know it is what it is.”

The crew can’t predict from what location they’ll be cooking and serving meals. “It might be a high school cafeteria within walking distance to a 7-Eleven, or it might be in the mountains, three hours off the pavement,” he says. “We go pretty far afield sometimes.” Last summer, Maxwell worked with a crew stationed at Yellowstone National Park's local airport: “It was an incredibly beautiful setting.”

Once in place, the M Culinary Concepts’ crew must be ready to serve three meals a day to everyone on site. The scope of work can be for as few as 250 and has been as many as 4,000 people. “We once got into a situation where the number of fire fighters showing up was growing so fast that we didn’t sleep for three days,” he says. “You’ve got to be okay with whatever happens, and just know it is what it is.”

As challenging as the situations may be, he insists that quality standards remain at the highest level. “We use the same techniques and culinary approaches as we do with any catering job,” Maxwell says. “We cook fresh and from scratch. We bring in all the water and power we’ll need, and we have our own generators. It’s a completely self-sustained kitchen.” The fire fighters’ dietary needs mirror those of the population at large, so each meal offering includes gluten-free, dairy-free, and vegetarian options.

As part of the government contract, there is an approved 14-day rotating menu that specifies required food groups and portion sizes. “The crew eats breakfast on site, and then we give them a bag lunch, including snacks, to take with them during the day,” Maxwell says. “They eat dinner back at the camp whenever they return, which might be 12 hours or more, depending on what’s happening with the fire.”

The right team for battle

While equipment and logistics are certainly important, Maxwell says that having the right personnel on the mobile catering crew is the key to success. “It takes a certain kind of person to thrive in this extreme environment, and it’s certainly not the right situation for everyone,” he says. “This work requires both flexibility and mental toughness. You can’t let anything bother you, you absolutely must have the drive to succeed.” Even under often incredibly challenging circumstances, his crews have relatively little turnover, and loyalty is high on both sides. He says: “If I had to go fight a battle, these are the people I’d want by my side.” 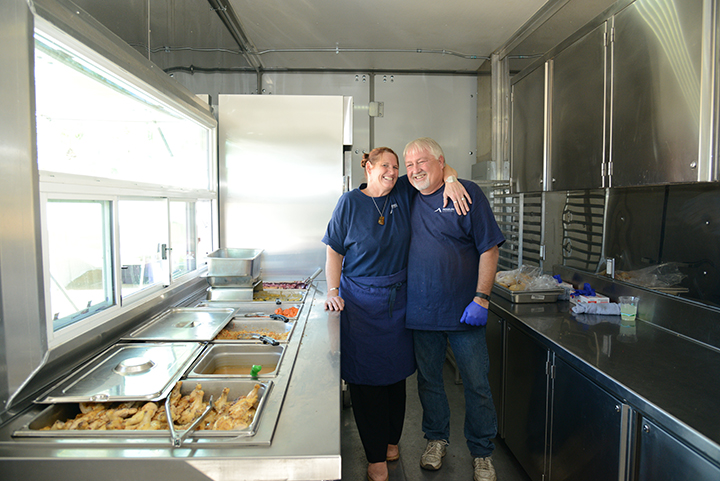 Every element of the kitchen setup is provided, but catering crew members are required to bring their own personal items, and they need to be prepared for a potentially demanding environment. “I’ve been at one fire where it was 115 degrees, and one in Montana where it was 15 degrees,” Maxwell says. “At higher elevations, we’ve had snow in summer. You have to bring clothing that allows you to layer up and down, and but it all still needs to fit in a duffel bag.” Other packing necessities? “You need a good tent, of course. And a headlamp is absolutely necessary, especially because you really want to be hands-free.” 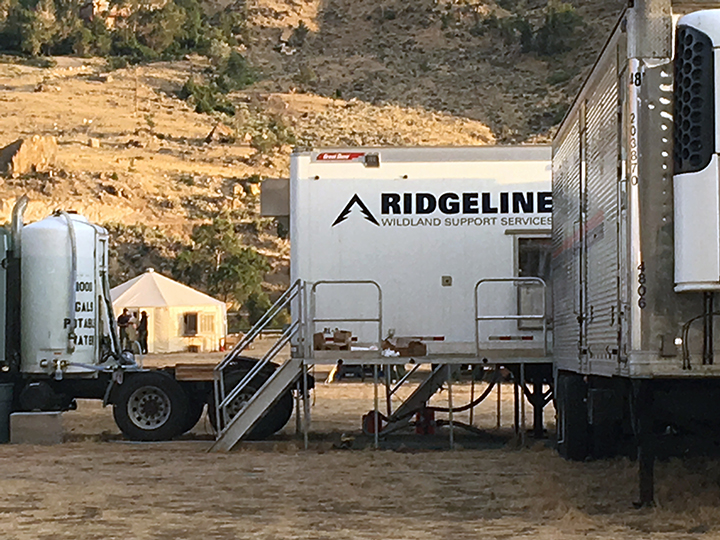 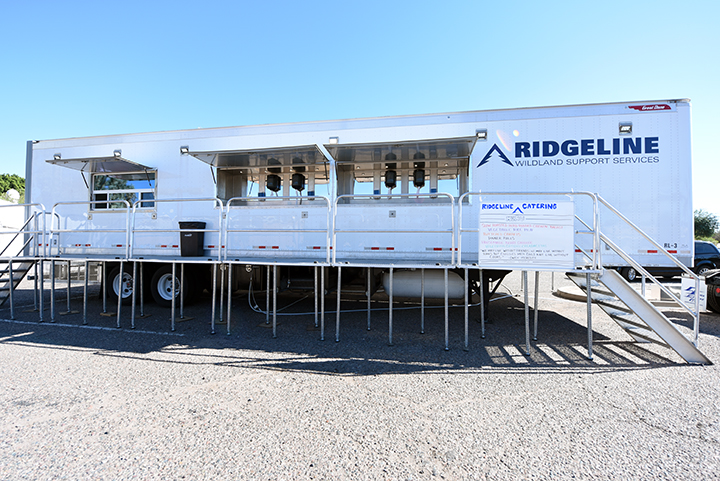 Maxwell says that, as far as he knows, none of his crews have ever been in imminent danger. “But there have been incidents where fire camps have been burned over,” he says. “I was in a camp when there was serious talk about needing to evacuate. It gets pretty crazy when you’re out in the woods and at the mercy of Mother Nature. Winds can shift and that can be scary. But we are with professional, experienced fire fighters who are incredibly intelligent. They understand the way fire reacts and grows. We trust them and they rely on us. It’s a very tight-knit community.”

While the quality of the food is just as fresh and delicious as that served at other M Culinary Concepts’ events, the attitude of the “guests” is often markedly different. Maxwell says that the fire crews who eat from the mobile kitchens are incredibly grateful to the culinary team. “The people in this business are rugged individuals, real outdoors types,” he says. “They work very hard and can’t wait to have a hearty, nourishing meal before they fall into their sleeping bags, then get back up the next day to do it all over again. It’s very gratifying to feed someone who’s been on a fire line all day, because they are so thankful for what we do.” 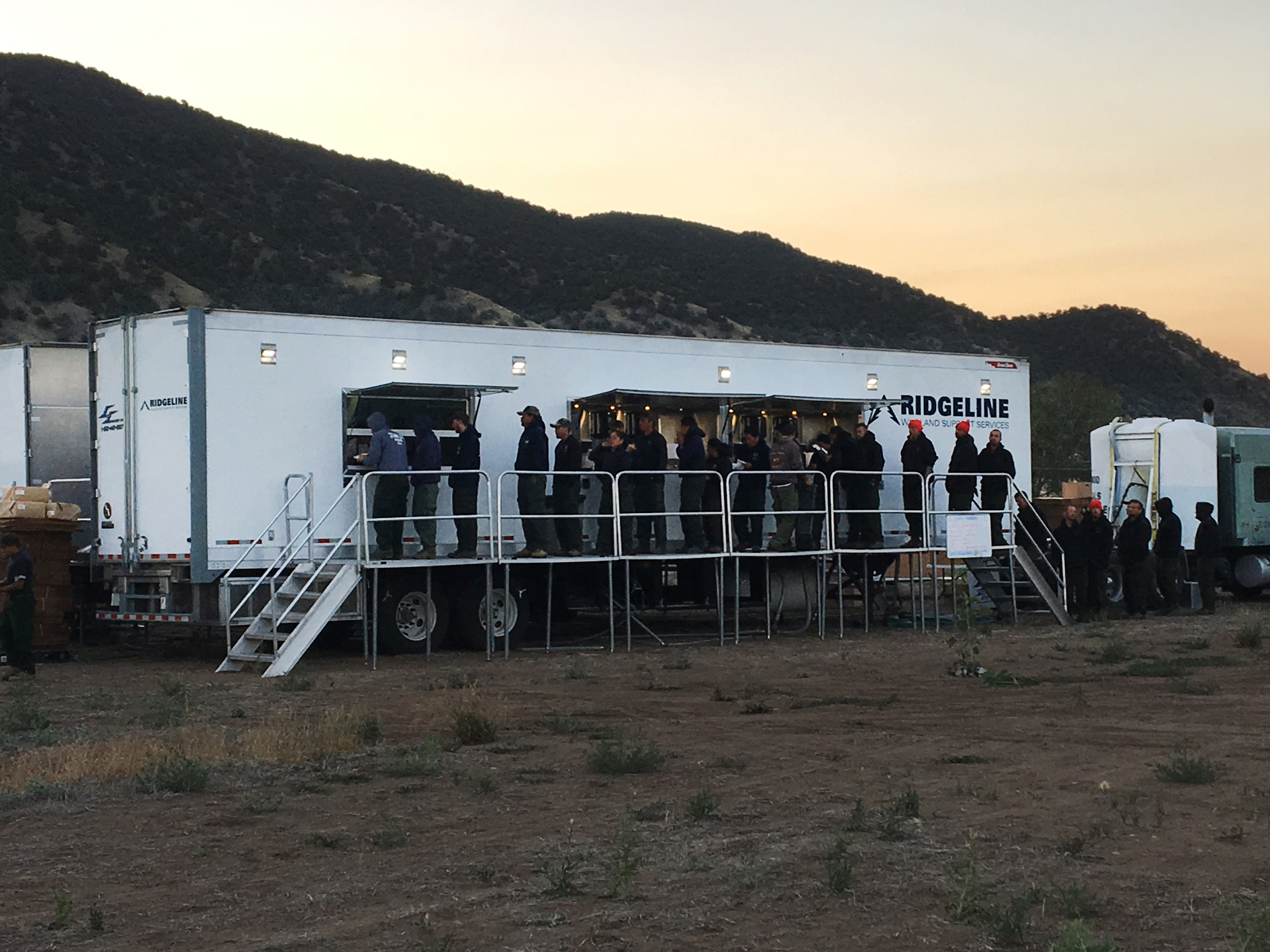