He has sold everything from cosmetics to heavy industrial equipment. He has run a direct marketing lead agency. Then, he brought all he has learned in these disparate fields to become a consummate catering professional in charge of prestigious events such as the Academy and Emmy Awards, more than 3,500 weddings, and innumerable other high-profile mega-events. 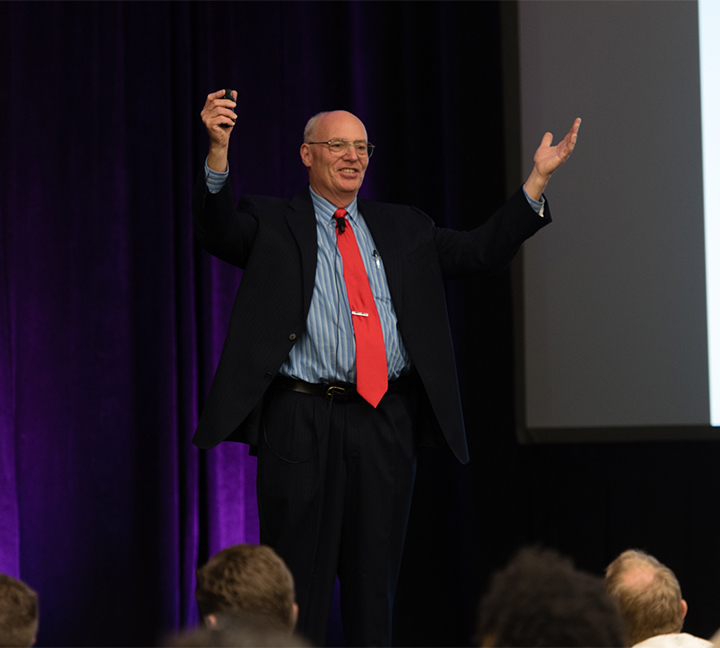 Many describe Roy Porter as a teacher, but he considers himself a lifelong learner. “it’s just my nature to want to continually improve—I’m a vacuum for it—and I like to share what I’ve learned.” Photos courtesy Catersource

But Roy Porter is so much more than the sum of his experience. He is an inveterate, insatiable learner who scoops up knowledge of everything from lean manufacturing to etiquette history and generously shares it with all who want to improve their catering chops. A regular contributor to Caterource magazine, Art of Catering Food, and Catersource Conference & Tradeshow, he has earned many unofficial titles, from the Renaissance Man, the Professor, and the Catering Guru, to the Storyteller and the Catering MacGyver.

Most of all, he is, as his friend and colleague Carl Clemetson, Senior Event Producer with Hometown Elegance Catering and Production, says, “the quiet, clear, consistent voice of reason that cuts through all the drama of the catering business.”

In short, he follows in the footsteps of Michael Roman, who founded Catersource to do just that. There is no one more fitting to be recognized as this year’s Michael Roman Lifetime Achievement Award winner, say all who know him.

While he learned something about feeding a crowd by growing up in a family of five, his path first meandered in some vastly different directions, including sales and marketing. He was running a direct lead-generation agency when the economy hit the skids in 2007 and it became apparent it was time to move on. 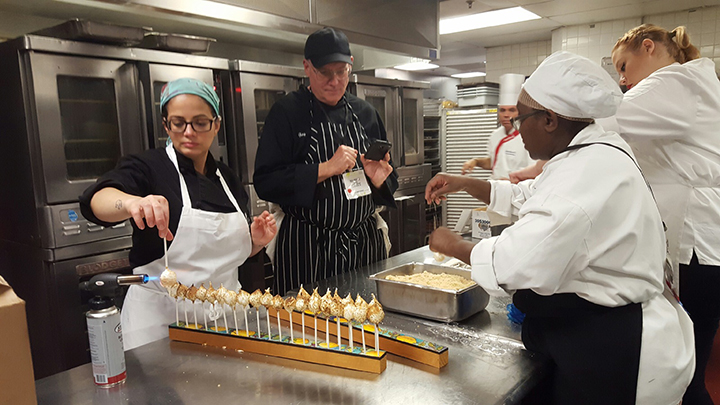 You will often find Roy Porter back of house, such as here, at Art of Catering Food.  Photo courtesy Catersource

While his background in food service (while in college) had already put him in charge of arranging the agency’s dinners, as well as hiring caterers for press and investor events, he had not really thought much about going into catering as a business...until a seed was planted. A caterer he had worked with said, “If you need a job, come on over and we’ll put you to work.” He went ahead and applied for the job, thinking that the flexible hours would allow him to keep his hand in the lead-generation industry.

“It just kind of grew from there,” he says. After about a year with that first company, he signed up with several other caterers and staffing agencies in the Southern California area, where he lived, “so I could get work to keep my house and keep my wife and daughter fed. I found the work—and the problem-solving—really fulfilling.” 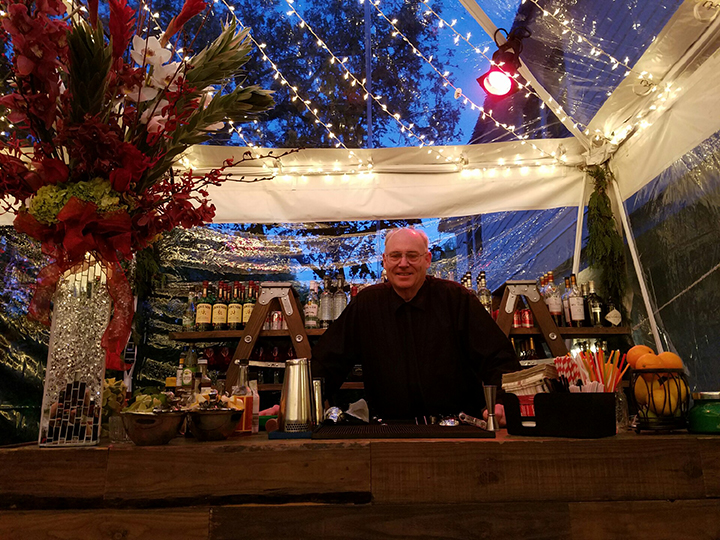 Roy Porter is a familiar face behind the bar at some of the industry’s most high-profile events, such as the Academy and Emmy Awards. Photo courtesy Roy Porter

“Roy leverages everything he learned in all the different industries he has worked with to provide an outsider perspective that may not seem to make sense when you first hear it,” says Clemetson. “But he can take lessons from Toyota’s manufacturing model, the postal service, direct marketing—all sorts of non-catering organizations, and apply them to what you do in catering. It helps get you out of the weeds of details we tend to get caught up in. He leads you to the answers, but lets you discover them for yourself, in a very humble way.”

Of his role as the industry’s Professor, Porter says: “Knowledge is power. It enables people to get rid of barriers and obstacles. It provides avenues to greater income opportunities, and it is fun to be creative and solve problems. It’s just my nature to want to continually improve—I’m a vacuum for it—and I like to share what I’ve learned.”

When Porter first got into catering, “it was a bit frustrating because there wasn’t much training material for caterers,” he said. “I used to call Mike Roman and bug him: ‘Mr. Roman, why don’t we have classes on this?’ He encouraged me to do the research and create the kind of training programs that I would want to have.

“Well, I like a good challenge, and that was coming from a very lofty and influential source, so I set to work,” he says. “The thing I continue to struggle with and refine is how to convey this information to the greatest number of people so that they understand it and can act on it.” 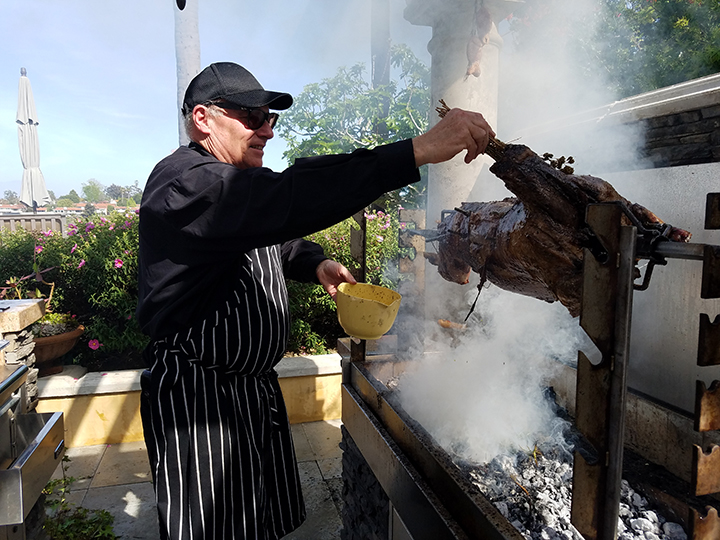 Porter comes from a family of five, so he’s no stranger to preparing large family meals, like this lamb for a Greek Easter celebration. Photo courtesy Roy Porter

Bill Pannhoff, who is a bit of a catering guru himself in addition to being the Owner/Chef at B&B Catering and Event Planning, said he first became aware of Porter when he was moderating the Catersource online forum under Michael Roman’s guidance in the early 2000s. “This kid kept sharing all these ideas and thoughts and comments, and I finally called him and said, ‘Hey, what’s your story?’” Long story short, Pannhoff soon invited Porter to be the forum’s co-moderator, answering thousands of questions from caterers around the country. “His popularity just grew from there,” Pannhoff says. “He is literally a catering genius, and he always is willing to share.”

Brittney Melnick, B with a Twist Catering, agrees. “He has helped elevate so many people, especially smaller caterers. In the best possible sense, he really does know it all.” Melnick’s partner, Anil Melnick, also adds, “It’s rare to find someone who is so knowledgeable who is so willing to share that knowledge, always in a nurturing and helpful way, never competitive. For somebody who is that successful to be that humble is just incredible.”

“As much as I have been able to learn, there’s still so much I don’t know,” Porter says.

As for his “Storyteller” sobriquet, he says, “People learn best through stories, so I’ve learned to create stories to pass along knowledge. Every so often, someone will challenge me, so I will have to find a better answer, a better story.”

He pulls his stories from the most unlikely sources. For example, he has used the film Patton to teach leadership skills for those who want to make the leap to management. He’ll teach how Toyota uses lean management on its production line to bring lessons on how to better manage your catering production, reduce waste, save money, and bring more value to guests. He’ll show clips of Formula One and NASCAR pit crews, because “If they can change four tires in two seconds, we can get a plate of food off of an assembly line and into a guest’s hands in 30 seconds,” he says.

“Roy is one of those rare breeds who share Michael Roman’s philosophy that caterers need to be unified and taken seriously, nationally and internationally,” says Pannhoff. “Mike Roman wrote the book on how we should think and act, how we should respond to and educate our customers. Roy wants those same things. He is a teacher, a communicator, and a trainer. If he wanted to, he could have built an empire, but he wants to be an educator instead. His only fault is that he shares too much.”

No one should be surprised to learn that this “Catering MacGyver” was an Eagle Scout.

It goes, however, beyond scouting’s “Be Prepared” motto, Porter notes. “You have to have a Seal Team Six mentality.” For example, for a wedding scheduled to be held during California’s forest fire season, he negotiated with the fire battalion to allow the wedding to take place. “We managed to pull off the wedding, and the next day I fed 155 firefighters,” he says with a laugh.

Being prepared has paid off. He has dealt with everything from a snake-bit guest to deer attacking the buffet line: “All we could do at that point was bring in ... pizza. The guests all took pictures and had a great story to tell,” he says.

Roy Porter will have a full plate at Catersource + The Special Event this July including hands-on demonstrations, discussions, and his Candid Conversation, which will be on Tuesday, July 20 at 8:00 a.m. He will be honored at the Leadership Lunch on Thursday, July 22 in Miami Beach, FL. Go to conference.catersource.com to get your pass today.

Porter says his risk management philosophy boils down to the quote: “It’s not what happens, it’s how you react to what happens.” If you are in charge, you cannot freak out if a breaker blows. You must be present and focused.

“If you fall apart, the staff will fall apart. You must be strong for them. When it gets dark and stormy, if you are prepared, you can handle the storm,” he says.

Literally. He always carries a Leatherman multi-tool kit, if allowed by security. If not, he has a flashlight handy for Southern California’s propensity for blackouts—which have happened during more than one off-premise event he has worked.

“Off-premise catering is taking the fine dining experience of a restaurant out into anywhere, so you must be prepared to serve anywhere, under any condition, any time, with a smile. You must either adapt or adopt, meaning you figure out a workable solution. Even though I have what I call 'Roy’s Rules,' every so often I have to go back and adjust them,” he says.

It’s all about the relationships

When people ask why he does what he does, Porter says he is in it for the learning and teaching, but even more importantly, for the people he meets. Catersource has been invaluable in nourishing those relationships, he added.

“We’ve stayed at each other’s houses, we share and celebrate our wins, we mourn our losses together. So reach out, introduce yourself. Ask where they are from, ask about the biggest challenge in their business. There are no stupid questions—we’re all here to learn and have a good time. So what’s your question? Don’t hesitate to ask.” 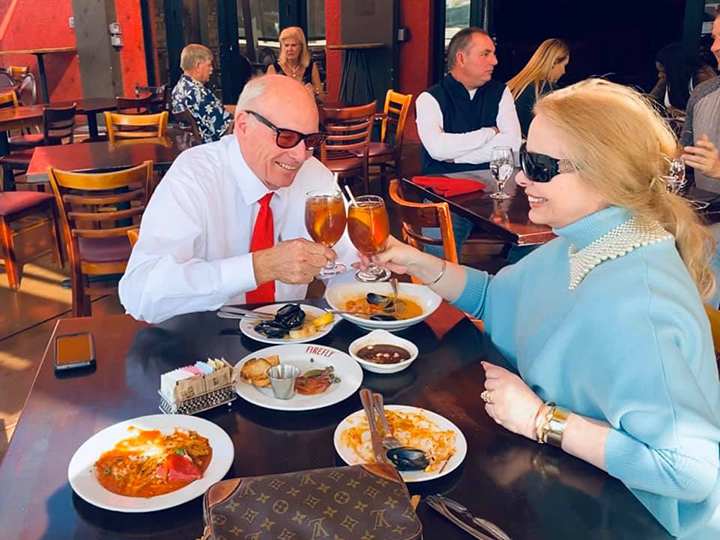 Longtime colleague Meryl Snow (right) says that “in an industry where so many people are takers, [roy] is truly a giver." Photo courtesy Roy Porter

In closing, consider these words from Meryl Snow, a 28-year special event and catering industry veteran and co-founder of Feastivities Events, “He’s a teacher by nature. When I said, ‘You need to turn this into a business, Roy,’—because he is so free with his knowledge share—he said, ‘I just really want to help people.’ In an industry where so many people are takers, he is truly a giver. You know that old expression, ‘You give them an inch and they will take a mile’? He will give them the mile.” 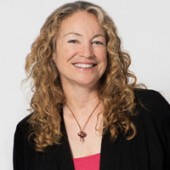