How might your clients respond if they were asked to describe the flavors and ingredients of plant-based cuisine? Perhaps they would mention the basic starting point for any good soup or mélange: the soothing mirepoix of carrots, onions, and celery.

How about the Three Sisters: corn, beans, and squash? Yes!

Lots of leafy greens and tomatoes with a sprinkling of green onions and dill, dressed with a lively buttermilk vinaigrette. Summer on a plate!

Responses lean mostly to vegetables on the side or “as part of.”

But at the center of the plate? This has been a long row to hoe for plant proponents. Why is that so? And, what can chefs do to promote and incorporate plants into fully vegetarian or (even more popular in 2020) flexitarian meals? To start, it’s about understanding the difference between plant and animal protein. 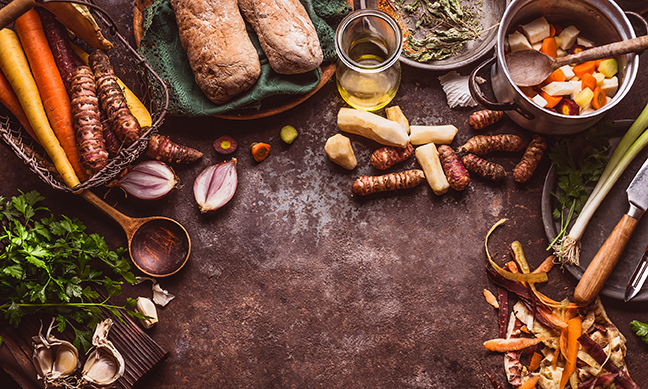 Culinary scientist, chef, and author Ali Bouzari, PhD, presenting at the Culinary Institute of America (CIA)’s May/June 2020 Global Plant-forward Culinary Summit, says that it all simmers down to communication styles.

Umami is a term coined by Japanese chemist Kikunae Ikeda, who identified in 1908 the chemical responsible for the distinct flavor of dashi (that being glutamic acid), the base of much of Japanese cuisine. The Japanese word for delicious is umai; the word umami translates most closely to “deliciousness.

“Animal life is based on movement,” offered Bouzari. “Animals yell at you, they will charge you, they will use their posture for interaction.” But while delicious, animal protein is, “really rudimentary. It’s basically bundles of proteins that … have simple functions and are chemically relatively very plain.”

Conversely, “Plant interaction is based on chemical warfare,” says Bouzari. “Every bit of communication from a plant, whether it’s a warning to stay away, or enticing for a mating ritual, or anything in between—is based on a chemical language that provides colors, tastes, aroma, texture.”

How does this impact flavor?

“Plants are just this incredible spectrum where all of those pieces of chemical machinery that were left over for storing energy, for communicating with allies, or communicating with enemies—all of that stuff carries flavors,” Bouzari noted. “The palette of colors we have to paint with, with plants—just purely chemically speaking—is an iridescent rainbow compared to the gray slab that is meat.

“That gray slab is a really great foundation and it’s really important, but it can’t do quite as much as what plants can do.”

One aspect, however, that has been more difficult to bring forth in the evolution of plant-based cuisine is that mostly-meat-associated taste: umami, an exceptionally pleasant, savory undertone that Bouzari compares to the bass line in a song— as opposed to the melody. This “fifth taste”—after sweet, sour, salty, and bitter—is elusive, hard to describe even…but it’s a layer that if missing causes one to quizzically look at a dish and say, “I don’t know what it is, can’t quite put my finger on it but…it’s missing something.” (Think David Bowie/Queen’s song, Under Pressure minus the bass line and you’ll know what I’m talking about.) 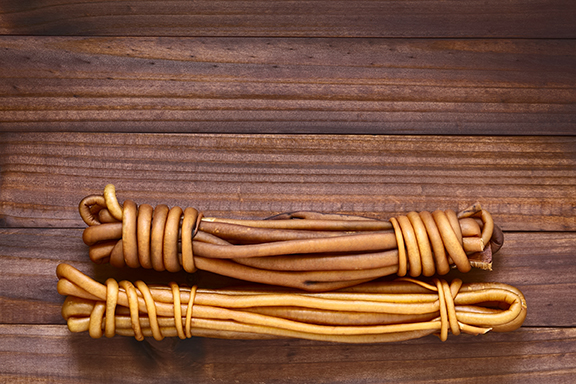 UMAMI RICH
Some types of plants have, or can develop, stronger umami profiles just in the way they are produced, such as dry farming tomatoes in order to concentrate the tomato flavor, or even the biological training (depriving them of a certain amount of UV food) that Matcha tea leaves go through in order to change their metabolism, which causes the leaves to pump up their glutamate production. Here is a partial list of umami-rich foods, according to healthline.com:
• Kombu seaweeds such as Naga, Rasaui, Hidaka
• Soy-based foods such as miso, soy sauce, soy beans
• Aged cheeses such as comte, parmesan, gouda
• Kimchi
• Seafood such as yellowtail, scallops, anchovies
• Mushrooms such as shiitake, truffles, and enoki

Another way to think about umami: Developmentally, one of the very first pops of flavor we receive as babies is rich in umami—that is, human breast milk. “It’s a taste familiar to us all from birth,” says Gary Beauchamp of the Monell Chemical Senses Center, Philadelphia, PA. We want umami, we crave umami. Plants have it too—just not in the prominent way our culture has grown accustomed to it.

Junk and fast food. This is where the U.S. began its journey, as it were, with that awareness of umami savoriness. Pringles, Doritos, Chick-fil-A’s chicken sandwich, instant ramen noodles to name a few. All contain monosodium glutamate or MSG, a flavor intensifier developed by chemist Kikunae Ikeda in the early 1900s while researching umami. The flavor of MSG itself is not pleasant, but when combined with something edible, it activates our taste buds positively.

It wasn’t until 2002, however, less than 20 years ago, that the presence of umami receptors in the tongue’s taste buds was revealed and umami was elevated to a primary “fifth” taste. The Umami Information Center (https://www.umamiinfo. com/) notes that when our taste buds sense umami, it triggers “the secretion of saliva and digestive juices, facilitating the smooth digestion of protein.” Protein. Center of the plate. Heck, are we back to talking about meat again? Uhm…

At Chef Amanda Cohen’s Dirt Candy restaurant in New York City (I dined there in early February 2020), she says, “Dinner is an experience of the raw and the cooked, the bold and the beautiful, full of roaring fire, tableside grilling, strange broths, and dishes that are both deceptively simple and staggeringly complex.” And that, ladies and gentlemen, is the key to moving plants to center of the plate: applying the cooking techniques typically associated with meat…to plants. Bouzari concurs: “Pairing umami with other meat-associated savory cues (such as smoking, grilling, or charring) leaves a trail of breadcrumbs for your brain that will make diners relate a plant-forward dish with what they previously might have only thought of in relation to animal protein.” These cooking techniques, which may also include the addition of acids, sugars, or oils, chemically break apart the “chain of pearls” that each plant contains, allowing it to fly its own savory umami freak flag. 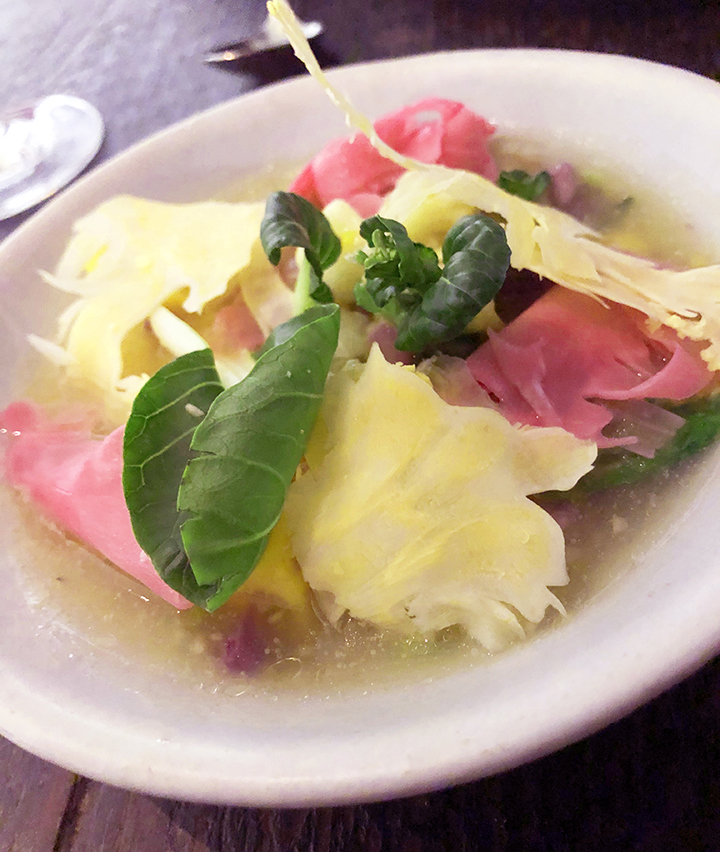 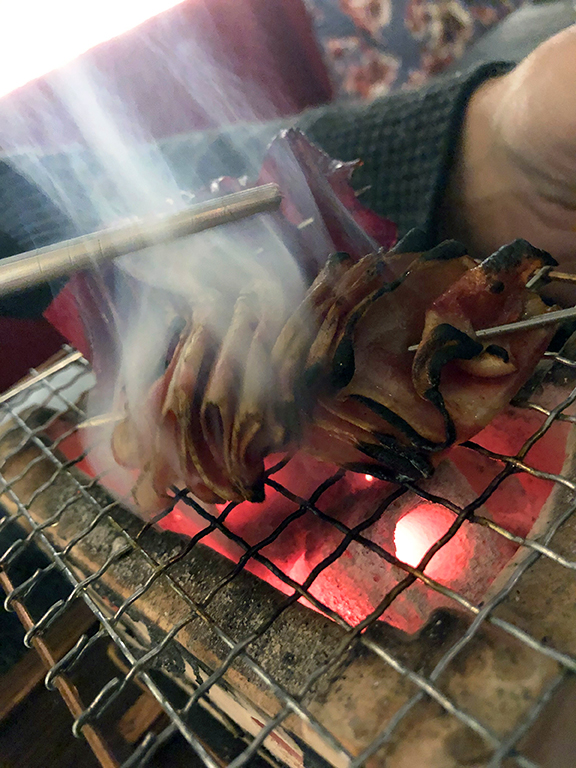 At Dirt Candy, my taste buds were on overdrive as I roasted slices of beets and onions on skewers via a tabletop teppanyaki grill; sipped smoked cabbage broth surrounded by ricotta dumplings and pickled purple cauliflower; and enjoyed the salty, savory pop of faux caviar made with seaweed draped over miniscule cucumber balls. This decadent experience—replete with twee receptacles containing caramelized carrot sliders and impressive tiered towers harboring little veggie filled flowerpots—made for an unforgettable night. Except for meat—totally forgot about that. 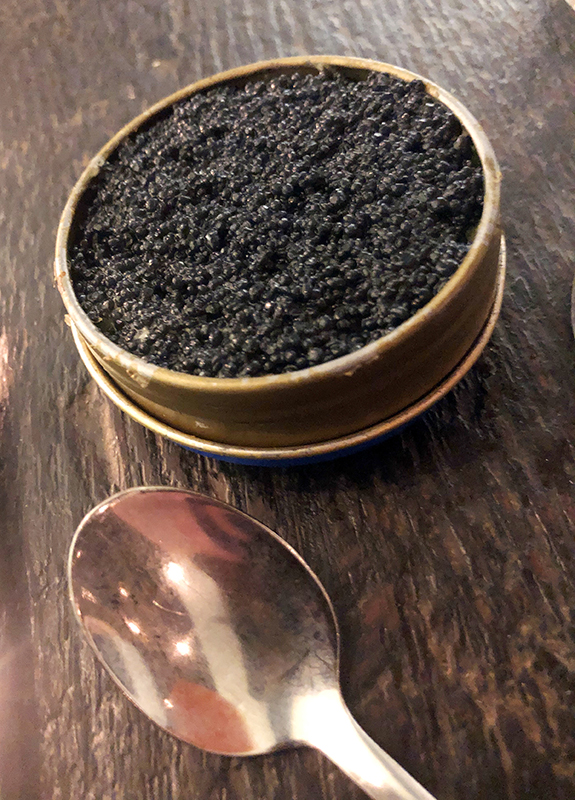 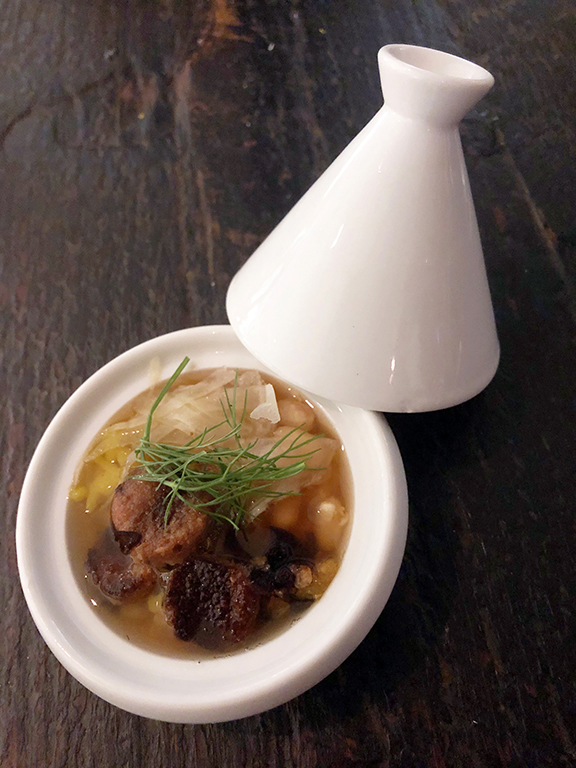 In a recent CIA poll of chefs, a smidge over 53% favored incorporating umami-rich ingredients such as seaweed, mushrooms, tomatoes, and anchovies into a plant-forward dish to enhance the flavor; 34% looked to searing, grilling, and other techniques that elicit the Maillard reaction (a reaction between amino acids and sugars that happens via heating); and a bit over 13% of chefs chose fermentation. One of those chefs was probably Greg Shapiro, out of Naples, Florida. 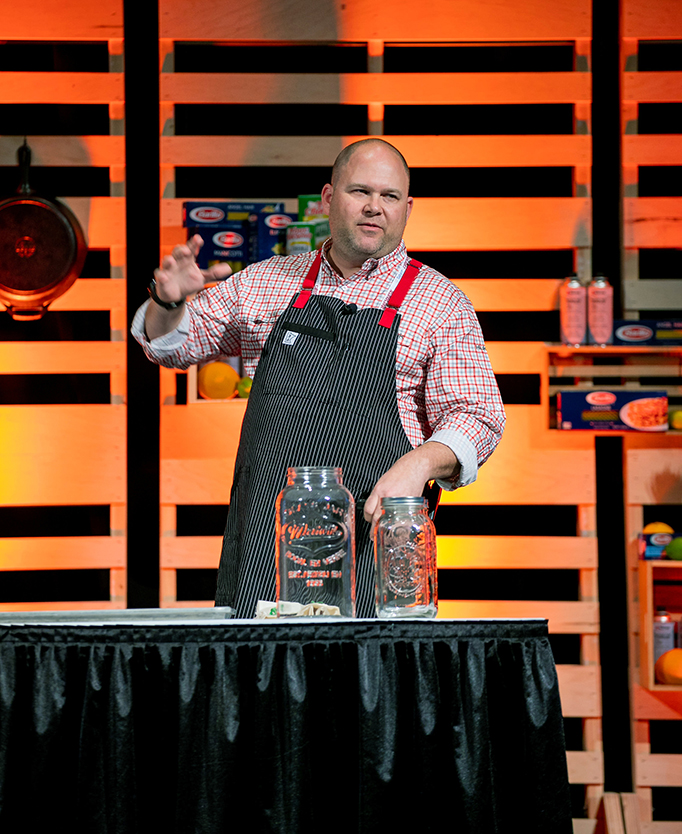 At Catersource 2020, Chef Shapiro of Tastebuds Custom Catering taught Funk, Bacteria and Bubbles—a beginner’s tutorial to adding the element of fermentation into the catering kitchen. “Anytime you are looking to increase the umami, sourness, spice, salt, or overall uniqueness of a dish, this is where fermentation is king…or queen,” he said. “There are so many applications for fermentation, you will never get stuck in a rut. It’s the most simplistic thing you can add to your kitchen.”

A big proponent of the #nowastechef movement, Chef Shapiro noted that fermenting also reduces kitchen waste and utilizes every ingredient that comes through the door. “It’s like crumpling up money and throwing it in the trash,” when you toss or compost food remnants versus utilize them for fermentation.

To bolster that, Shapiro discussed a method for converting leftover corn cobbs into corn katsuobushi, for which, “the umami punch is absolutely insane,” adding, “and the coolest part is that it doesn’t go bad. It’s not going to mold because the moisture content is gone; and the flavor is intense.” 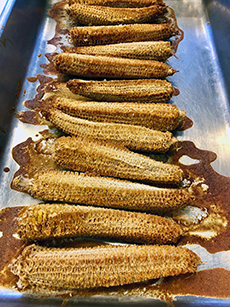 The plant-forward movement is taking a firm hold on palates as chefs develop new concepts and techniques that elevate all types of plants—not just vegetables—to the forefront. Fruits. Vegetables. Grains, beans, and other legumes. Plant oils. Soy, nuts, and seeds. Herbs, spices. Innovative concepts are on the rise, especially in tandem with a wee aspect of meat as the side or garnish, versus center.

As of the writing of this article, I’d love to speak about those restaurants and caterers across the U.S. who are elevating plants, with or without meat accompaniment, to great success. Bad Hunter in Chicago, Naked Fig Catering or Dirt Candy in New York, Gjelina in Los Angeles, Chow Girls Catering and Demi in Minneapolis. But it’s a tough time for those of us in the food business and all we can do is keep those positive vibes flowing.

The bottom line: increasing menu choices for flexitarians focused on eating less animal-based protein should be a primary objective for your 2020 and beyond menus. Want to keep them coming back? Make sure you have your secret weapon—the umami bomb—in your arsenal