The food scene will continue to innovate and shape the catering world as we move out of a pandemic, and into a new tasty-looking future. 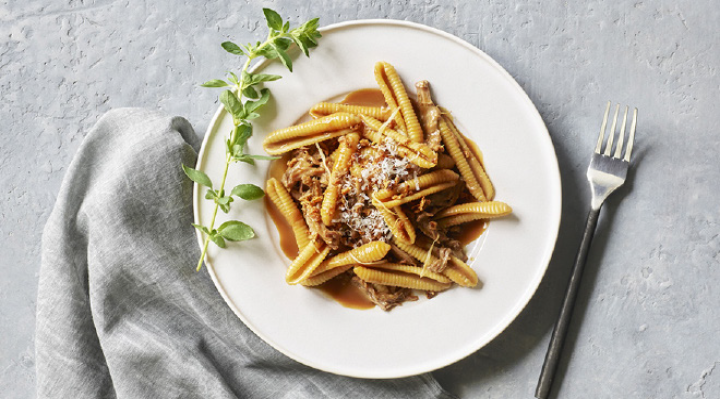 Itameshi is a new fusion cuisine that combines Japanese and Italian cuisines together, such as this wafu Italian soy ginger pork ragu with sesame ricotta cavatelli from Chef Robbie Felic of pasta RAMEN in New Jersey. Photo courtesy Kikkoman

2022 will see many of 2021’s most popular trends continue, while also looking internationally for flavor and menu inspiration. Check out what’s on the menu for 2022 with these food and beverage trends.

International cuisines will be joining forces in 2022 to deliver flavor combinations that will not only excite guests, but that will allow chefs to experiment in their own kitchens.

While global food fusions are nothing new, little is known about one of the newest emerging mashups, Itameshi. Itameshi simply means “Italian Food” in Japanese, but it’s also become synonymous for a new fusion cuisine that combines Japanese and Italian cuisines together for something truly unique. One example of this would be tarako spaghetti, which combines pollock roe with spaghetti along with butter, soy sauce, and dried seaweed, which creates a delicious umami explosion.

art of the global mashup, Korean and Spanish dishes, will fuse together in 2022 to create something truly unique, like this Korean paella from Chef Peter Lee, Co-Owner & Chef at Secret Bao in Santa Barbara, CA. Photo courtesy Kikkoman

2022 will also see the rise of other global fusion cuisines such as Korean and Spanish. 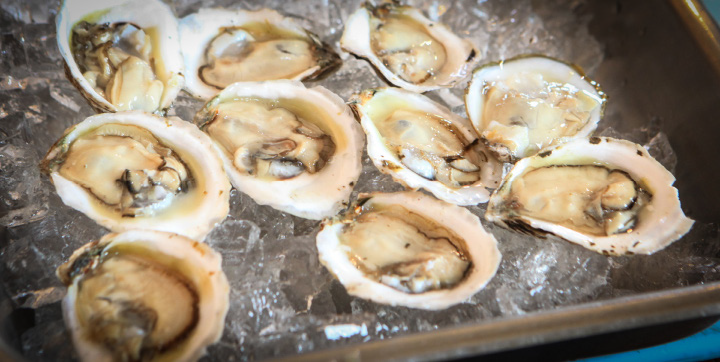 Some are anticipating 2022 to be the year of American oysters using sustainable farming practices, such as those of National Aquaculture Association. Photo courtesy Buzz Orr Multimedia

The deep blue sea offers limitless potential when it comes to innovation. In addition to sustainable fishing practices, such as that of Seafood from Scotland (salmon, haddock, langoustine, and halibut) and sustainable oyster farming, such as from the National Aquaculture Association, new ingredients are also being discovered underwater. For example, seaweed and kelp offer an alternative to traditional greens and garnishes. 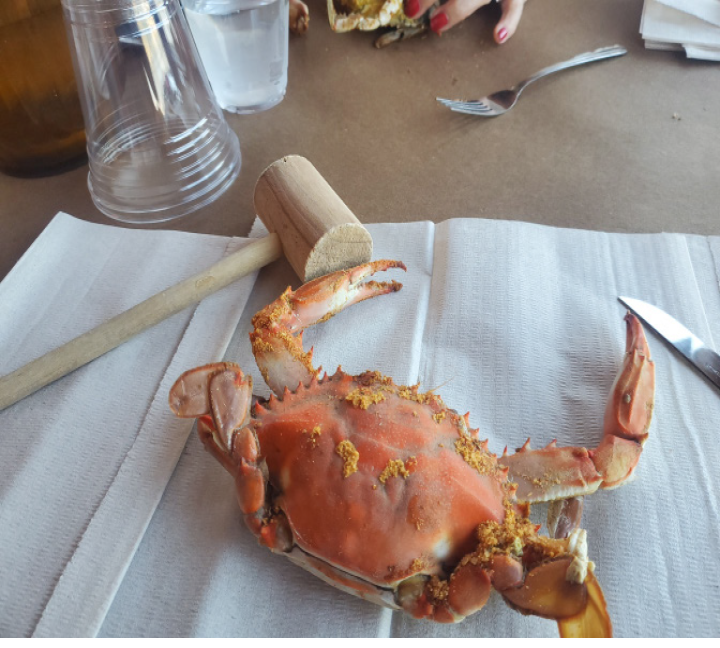 Shellfish– such as whole crab–has long been a popular menu item for seafood aficionados, and this will only continue in 2022. Photo courtesy Amber Kispert

Additionally, salt water and sea botanicals can contribute to reinventing snacks, seasonings, cocktails, and even charcuterie boards. Underwater botanicals offer a fresh, earthy flavor to savory meals and cocktails, while salt water brings a fresh and briny bite to foods and beverages.

2022 will see the rise of several ingredients and flavors as chefs find creative ways to elevate their dishes. 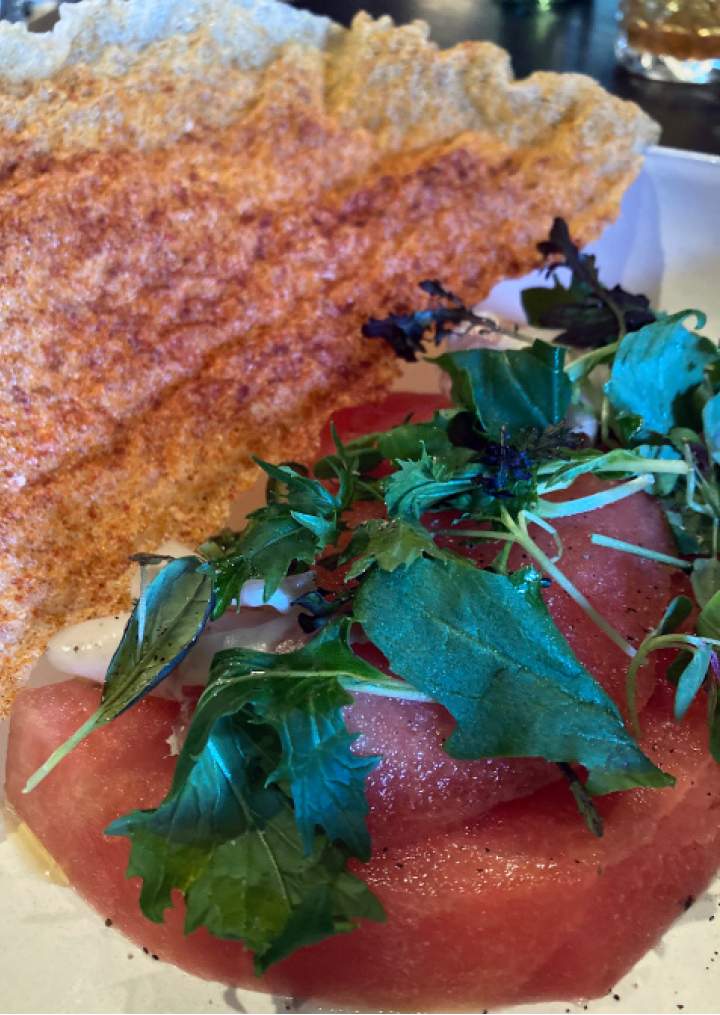 First up, Yuzu. Tart and sour, this lesser-known citrus fruit is popping up in vinaigrettes, hard seltzers, mayos, and more. Its lime-lemon-grapefruit flavor is also great for accenting soups, veggies, noodles and fish.

Next is kernza, a perennial grain whose growing practices help contribute to overall soil health. With its sweet and nutty flavor, kernza can be used in cereals, beers, other pulse-forward salads and pastas.

Sunflower seeds are expanding their reach, and can now be found in crackers, ice cream, and creamy cheeses.

Look for turmeric (the golden spice) to bring a heap of flavor to cocktails and other beverages, desserts, sauces and dressings, salads, and bread.

Hibiscus will also reign supreme in 2022. While it has long been a delicious addition to beverages and cocktails, chefs will soon be harnessing its sweet, but tart flavor for use in spreads and yogurts. Don’t underestimate the appeal of hibiscus’ signature pink hue either. 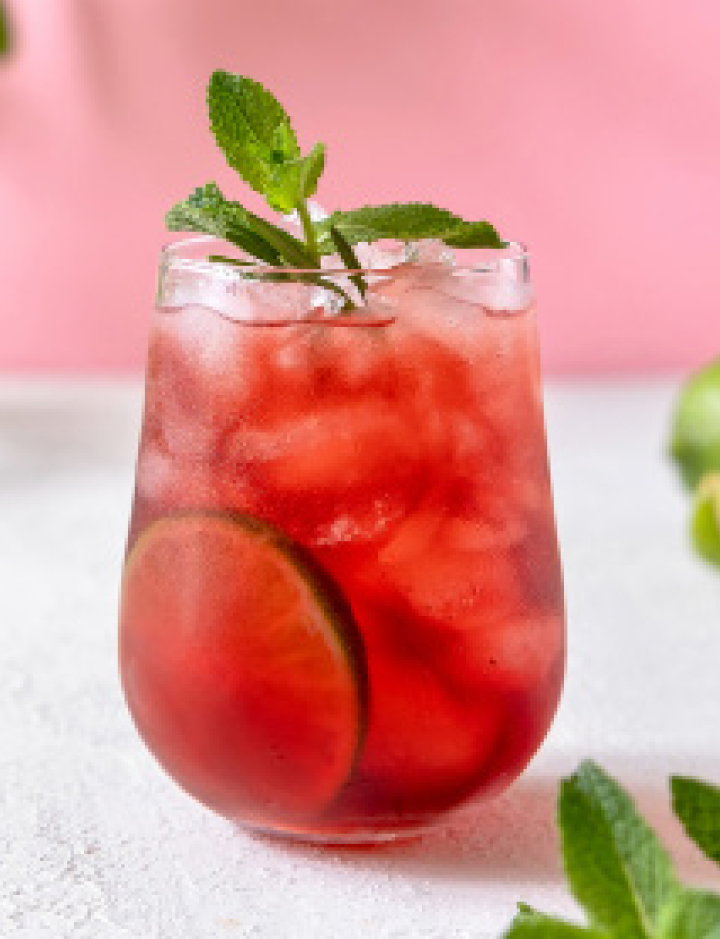 Hibiscus will be the flavor of the moment in 2022 for use in beverages and cocktails, as well as spreads and yogurts. Photo courtesy Getty Images

Little is known about moringa, but often called the “miracle tree,” it has long been used as an herbal remedy in India and Africa. Moringa is often described as having a grassy profile, like that of wheatgrass, spinach, or even kelp. Moringa leaves, powders, and oils are quickly growing in popularity due to its abundance of health properties, and will be making its way into cocktails, sauces, and desserts.

“[Moringa] is a literal super food, and we can sneak this into our diets really seamlessly,” said Zoe Adjonyoh, owner of Zoe’s Ghana Kitchen, during Tales of the Cocktail (TOTC) 2021.

Grow your own and pick your own will become even more popular in kitchens as guests continue to look for sustainable options.

For starters, indoor farming, from hydroponics to aquaponics, has risen greatly in popularity, and producers are constantly finding new, boundary-pushing ways to grow hyper-local crops as a way to be more sustainable. 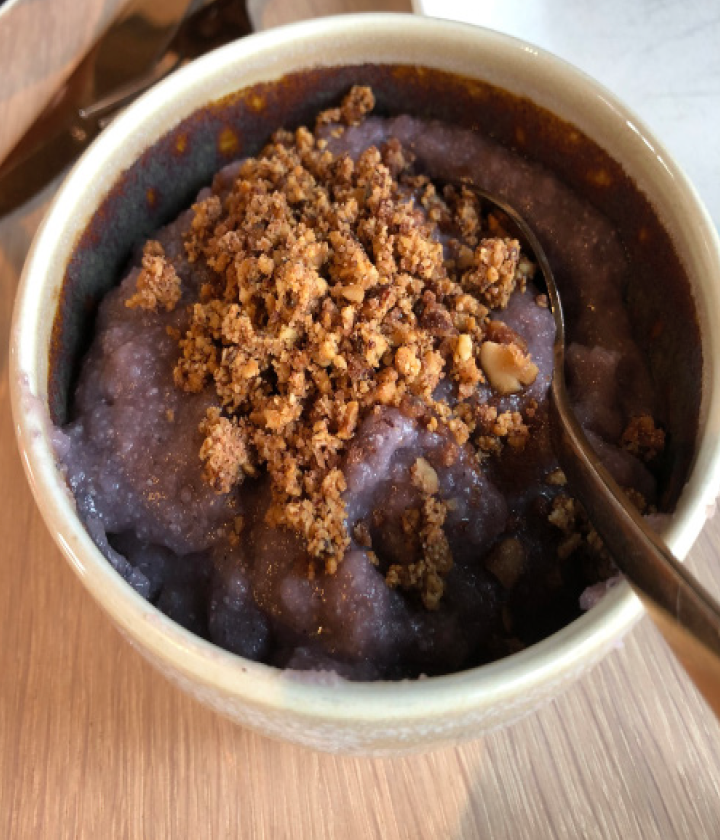 The spectacularly toned blue corn mush with maple and hazelnut is nourishing and delicious, and speaks to the clean practices of food, when stripped down to its most astonishing essence, can also be the most flavorful. Photo courtesy Kathleen Stoehr

Additionally, foraging will continue to be a hot trend going forward as more and more people are connecting with the edible plants around them. For example, fresh dandelion greens offer a healthy alternative to traditional garden greens, nettles are great as garnishes or in pesto sauces, garlic mustard is great on salads, and the invasive three-cornered leek is a delicious cross between a leek and a garlic.

Over the past several years, the plant-based movement has become such a consistent trend that it has become mainstream. What started off as a few menu offerings has grown into a full-blown dining alternative with everything from carrot hot dogs to mushroom “crab cakes.”

“It’s not just for the vegan audience anymore,” said Mark DiDomanico with Datassential during a recent webinar hosted by Nation’s
Restaurant News. 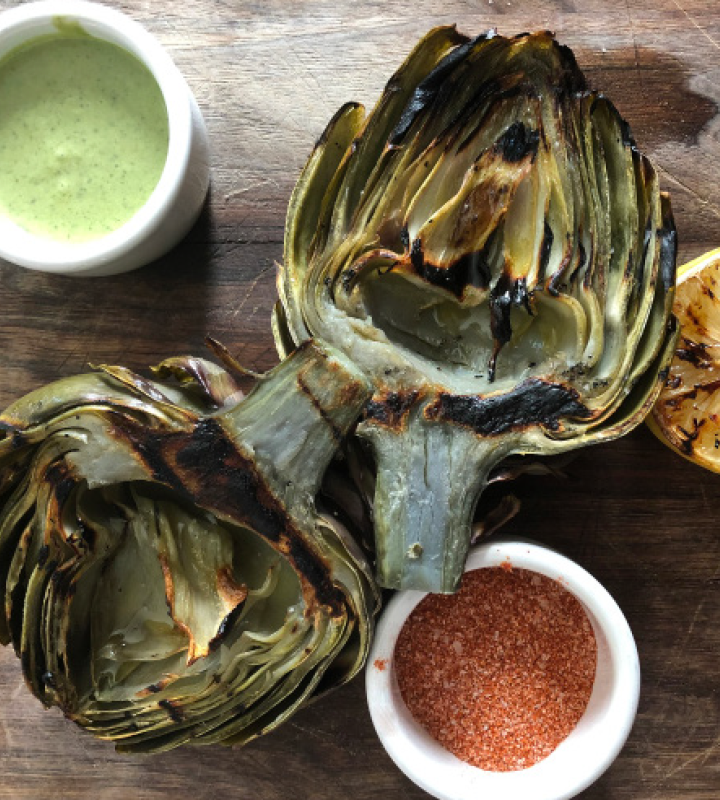 Chefs and guests alike have reimagined the make-up of their plates by moving veggies from side to the main. And it’s not just plant-based meat options anymore either. Consumers are also looking for plant-based seafood, plant-based eggs, as well as other sources of protein, such as legumes and grains.

For those who aren’t fully ready to embrace the plant-based lifestyle, and who are simply plant-curious, there is a new movement called reducetariansim. Whereas flexitarians primarily eat plants with the occasional inclusion of meat, eggs, and dairy, reducetarians mindfully and gradually reduce their consumption of these animal products with respect to their own diet. When animal products are on the menu, reducetarians make them count, opting for premium grass-fed meat and pasture-raised eggs.

“We really can’t get plant-based options on the menu fast enough right now,” said Chef Bob Bankert, University of Massachusetts, during the webinar. 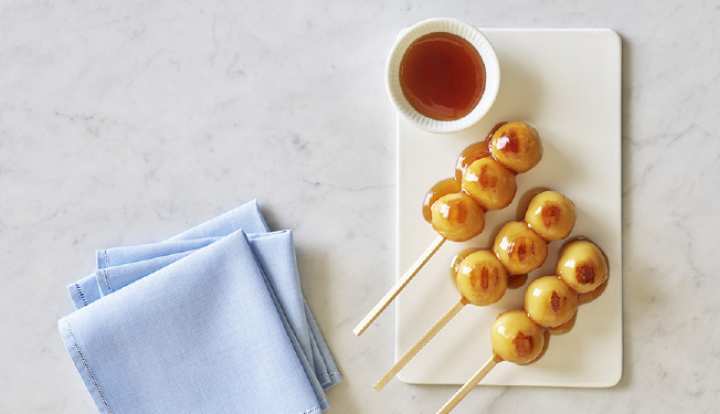 Taking it to the streets

Street food is often defined as the international snacks from Asia, Mexico, and Africa, which are prepared on the street, in food trucks, or at local markets using mostly regional ingredients. However, the idea of street food has evolved recently to also include restaurant and catering menus. Everything from tacos to elote to bao buns to street desserts are popping up everywhere via butler passed bites, plated meals, and action stations. 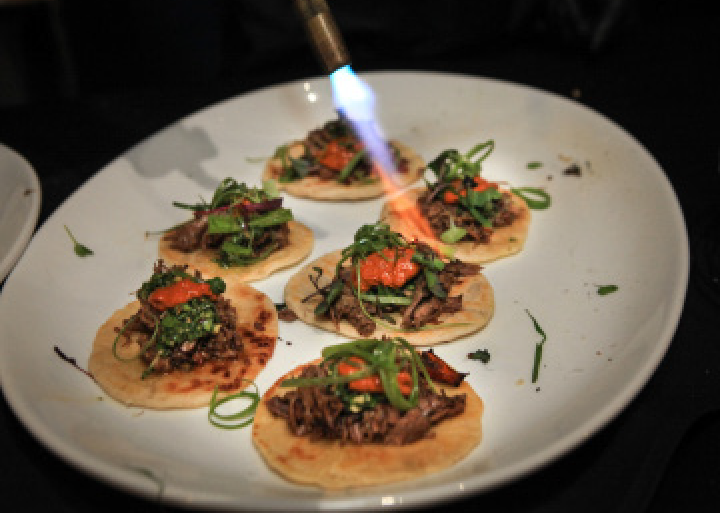 “Food is décor, and for a caterer street food just makes so much sense,” said Michael Stavros, with M Culinary Concepts, during his food trends session during Catersource + The Special Event 2021. “But now street foods need to be elevated a little bit. We can dress it up, we can make it fun, and we can make it elegant.” 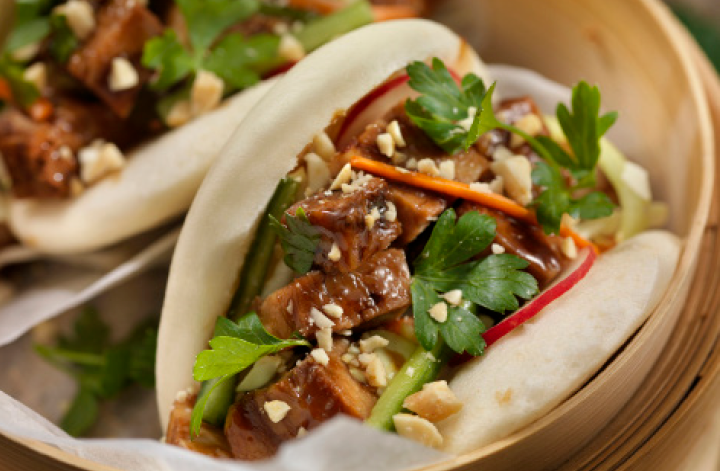 bao buns are a centuries-old Chinese street food that may as well have been custom-made for today’s grab-and-go world. Savory or sweet, veggie or meat, bao buns are a blank canvas for flavor. Photo courtesy Getty Images.

Whereas 2021 was all about the high-octane cocktails as customers opted for indulgence on the heels of the pandemic, 2022 will once again see temperance cocktails hit bar menus around the country, and more specifically we will see a rise in alcohol-free spirits.

“It’s not just people who don’t drink at all, but there are some people who just don’t want to drink as much,” said Derek Brown with Spiritless during TOTC. 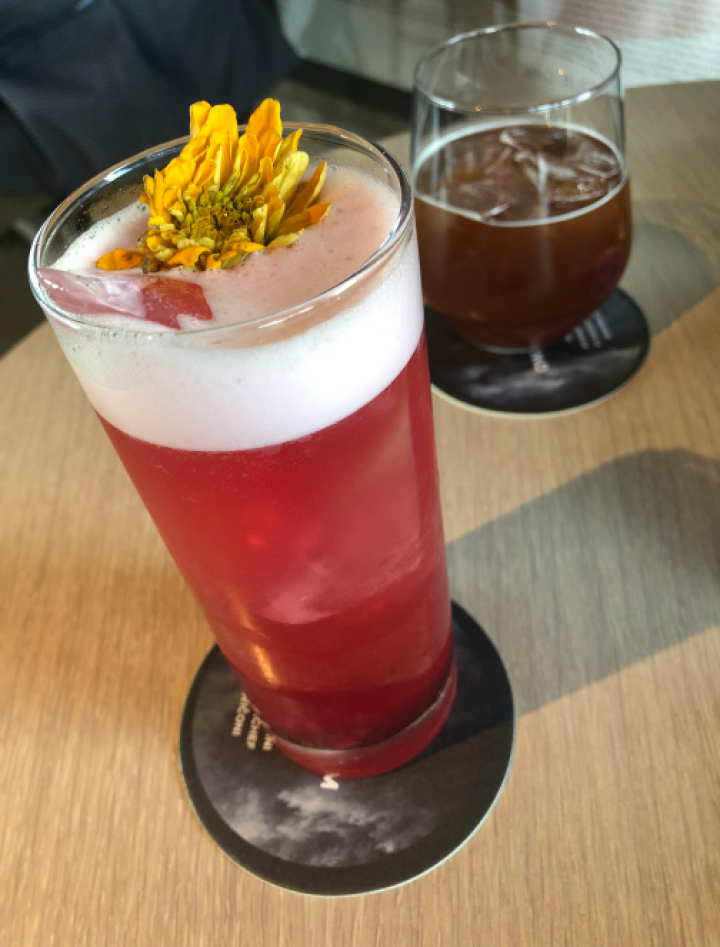 With so many non-alcoholic spirits available on the market (Seedlip, Spiritless, and Damrak) we have entered a new world of temperance cocktails that provides not only the taste, but also the sophistication of traditional cocktails without the buzz.

“Ultimately we want to make sure whatever we pass over the bar is delicious,” said Lauren Paylor, R&D Production Chef for Silver Lyan in Washington D.C., during TOTC. “Right now we have to unlearn how we think about approaching this category because it shouldn’t be an afterthought placed at the back of the menu. It takes time and care, and we should honor that.”

“It needs to taste like an adult beverage, and not just a bunch of juice in a glass,” she said during TOTC. “It’s not necessarily so much about exactly replacing flavors as considering the whole picture. We need to stop trying to think of these products in terms of what they don’t have and compensating for them in drinks, and actually really understand what flavors they are contributing and thinking about your drink wholistically that way.”

Blast from the past

Nostalgia will be the name of the game in the world of desserts of 2022 as retro desserts from the ‘80s and ‘90s (cherry bakewell, lemon drizzle, and sticky toffee pudding) are sought out for their emotional ties to childhood memories and simpler times. 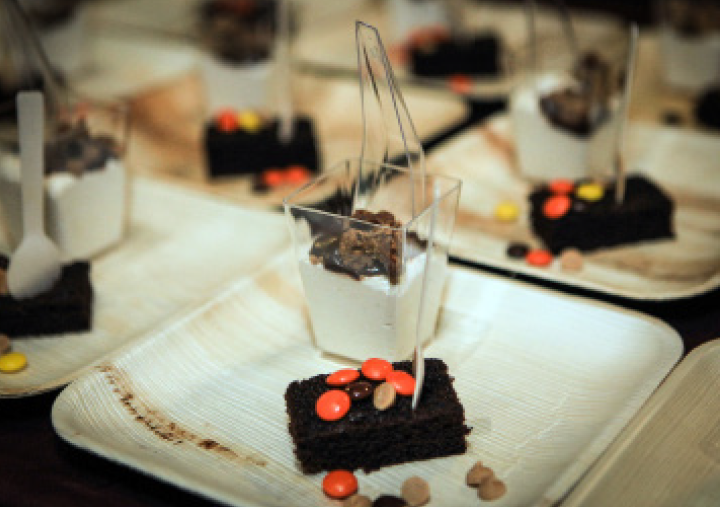 Fantasy-inspired desserts (unicorn, mermaid, bubblegum and rainbow) should also be on the radar for their sense of escapism, driven by social media and appealing visuals.

After all the indulgence that became the norm over the past year, 2022 will look to those foods that achieve mind-body balance. With a re-emergence of mindful eating inspired by ancient practices and beliefs, such as Ayurveda, the focus will be on choosing the right combination of foods, herbs, and flavors that reach specific goals in healing and pleasure. For example, cardamon, ginger, cinnamon, clove, and nutmeg are considered warming spices and offer a comforting inner balance. 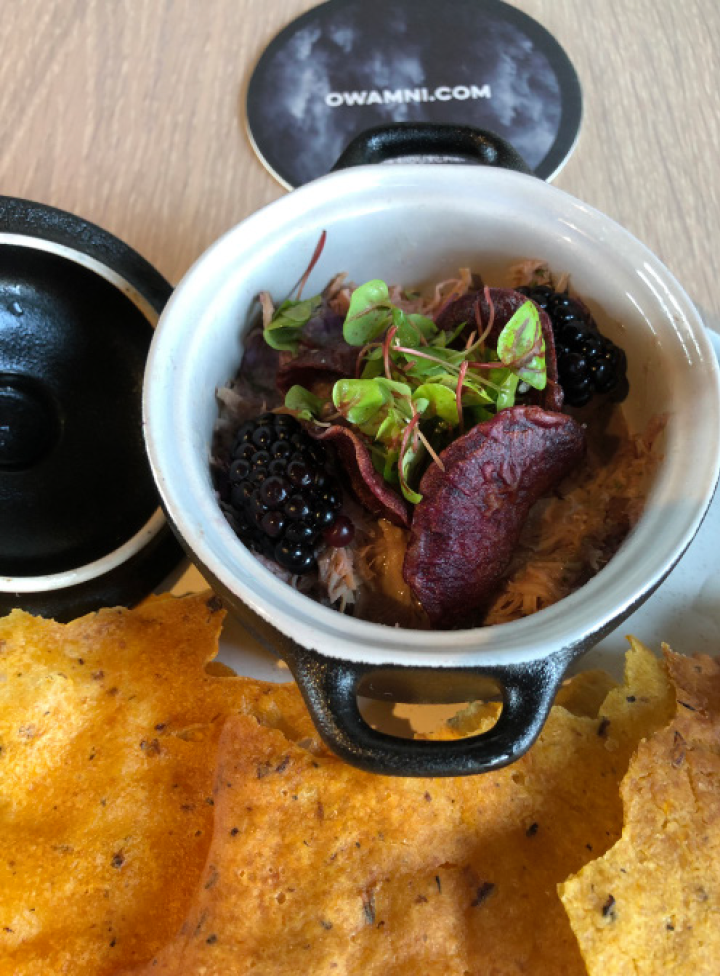 Potted duck from Owamni in Minneapolis, was on point with preserved duck, purple sweet potato, balsam fir, rosehip, and corn flatbread. The menu was developed to feature only indigenous food, prioritizing purchasing from Indigenous food producers first, and also supports the Minnesota region’s “amazing and diverse food growers.” For those consumers who are interested in more healthful—and mindful—eating, the approach this restaurant takes in only serving pre-Colonial foodstuffs makes this one of the top new restaurants of 2021. Photo courtesy Kathleen Stoehr