Steal This: Heal The Bay Fundraiser

Heal The Bay, a non-profit environmental group working to restore Santa Monica Bay, celebrated its 30th anniversary in beach-chic style, with more than 1,000 ocean-lovers joining the festivities on the sand at the Jonathan Club in Santa Monica, CA.

Events By Fabulous, Los Angeles, CA, created a stunning event atmosphere to entertain and engage guests for a spectacular evening of fun and fundraising.

The Gala’s theme, “Expect The Unexpected” featured an eclectic mix of specialty performances including a magical emcee, stilt walkers in sea god costumes, and tap numbers performed by the LA Follies.

Fabulous designed and built a multi-stage arena, complete with a catwalk, satellite performance stages, and “larger than life” high-res LED walls to ensure every seat had a perfect view of the show. With such a large event, this space plan was key to creating the intimacy needed to connect the audience to the cause.

Other highlights of the evening included craft beer provided by Golden Road Brewery (Heal The Bay IPA), sea creatures posing with guests at blue carpet arrivals, socially connected iPad photo booths, and quirky cover band, Postmodern Jukebox, who had guests dancing in the aisles until the wee hours of the night.

Enjoy this look at the excitement of the evening, which helped to raise over $1 million dollars for beach/ocean clean up! 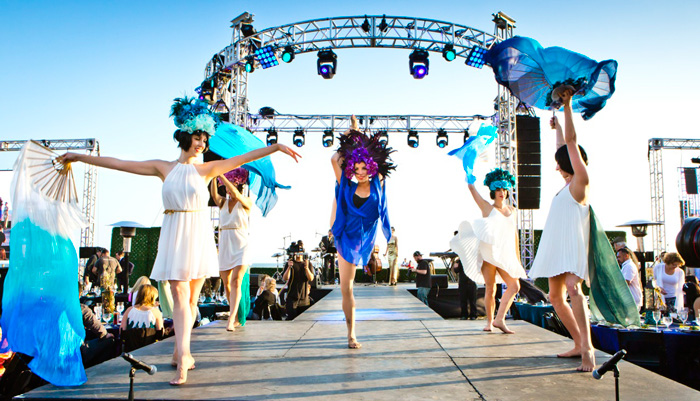