Up in the Air

For many years,  airplane food has gotten a bit of a bad reputation: soggy pasta, rubbery eggs, and dried out chicken. Although these perceptions may have been unfair to the catering chefs, there was some truth to those descriptors. In the old days of airline catering, technology for re-heating and serving meals was still fairly rudimentary. However, today’s in-flight meals are a far cry from those of yesteryear. 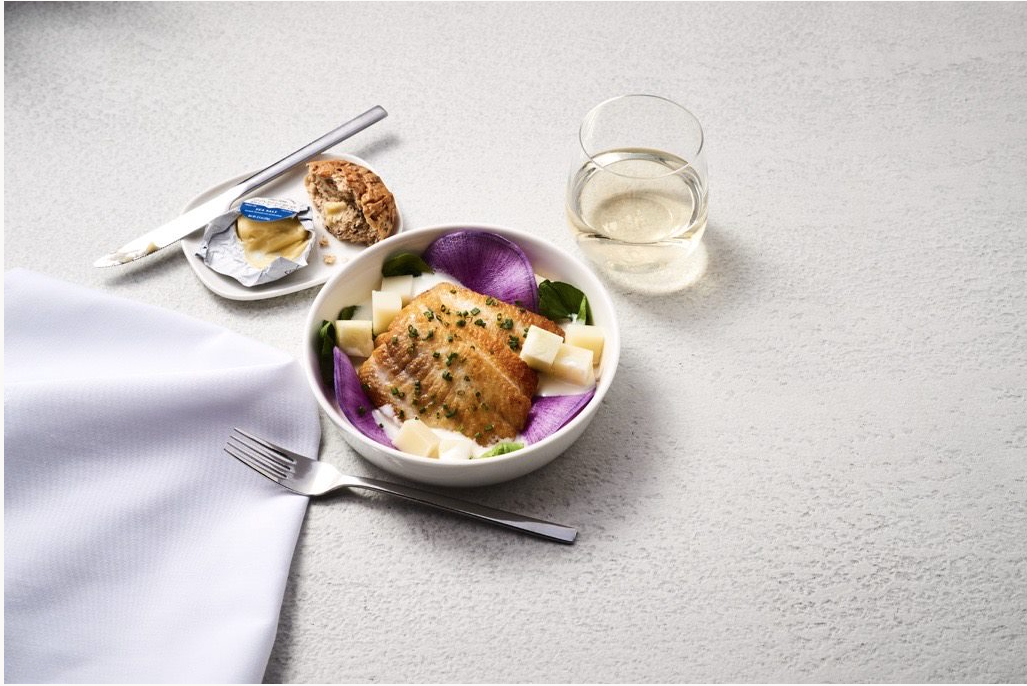 “We’ve reached a tipping point where we expect organic, artisan, and local food at markets, grocery stores, and restaurants,” said Chef Linton Hopkins, DeltaOne partner chef in a promotional video for Delta Airlines. “Why shouldn’t we have that on a plane?”

In-flight catering can be broken down into two different segments: commercial airlines and private planes. For commercial airlines, the majority partner with thirdparty catering companies (LSG Sky Chefs, Gate Gourmet, and Flying Food Group are the three largest) to develop in-flight menus. In terms of private planes, clients will either contract with a third-party catering company, such as Aire Culinaire, or work with the caterer directly (Marcia Selden Catering & Events has an arm of their business called Medallion Club for clients with private planes).

“It’s an arm of our business that we only market to the clients that we know have planes as a great benefit to them and a way to strengthen our relationships with them as they really appreciate that we do it,” says Robin Selden, executive chef for Marcia Selden Catering & Events. 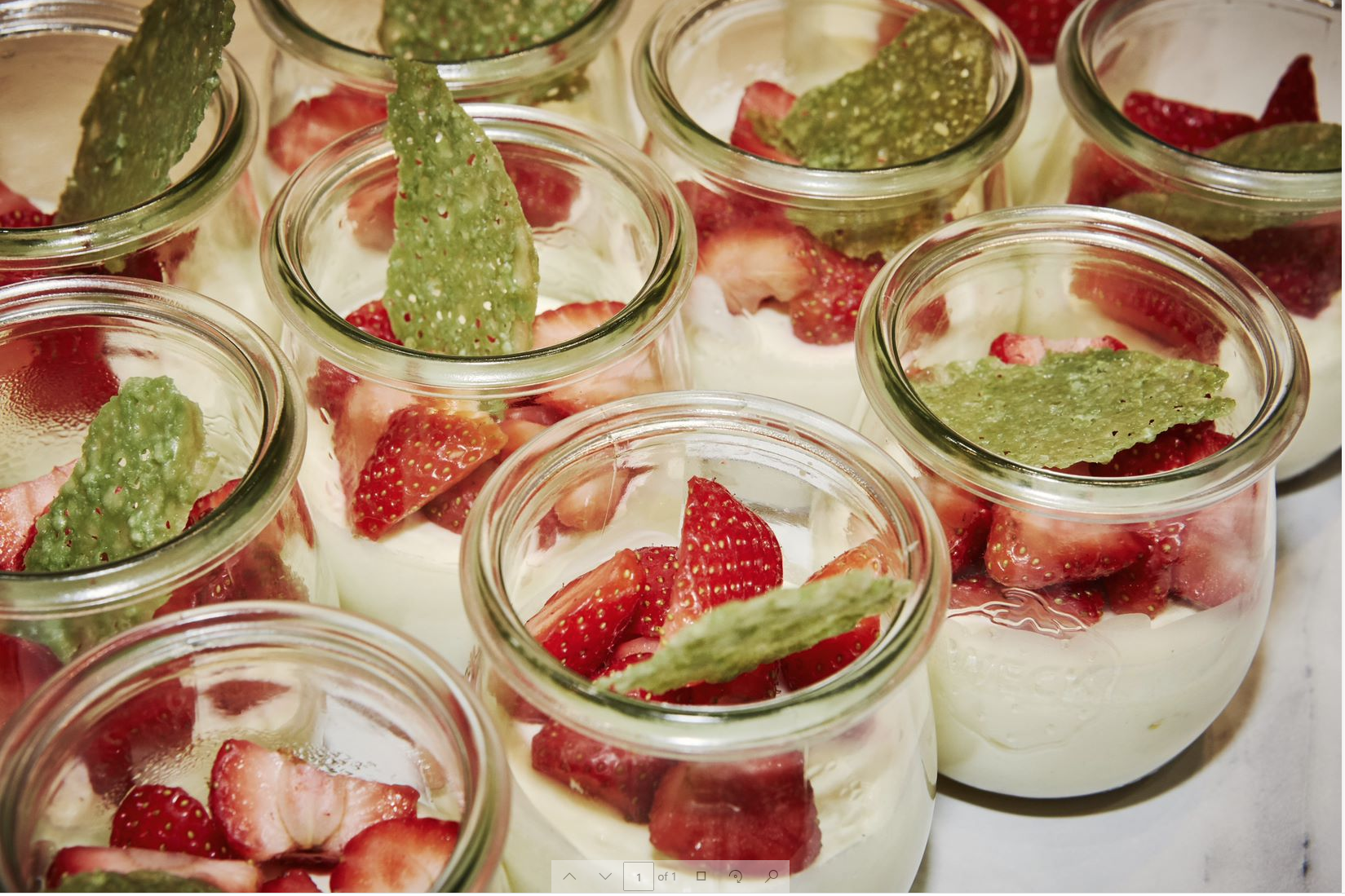 Catering for private planes is the same as catering for an off-premise venue except that your venue will be moving.

“The plane is taking off at a certain time and you better have everything on it, ready to go because once it leaves your job is done,” says Selden.

Commercial airline catering, however, is a completely different beast altogether because of the high volume, transportation, and reheating that goes along with it. Traditionally, meals are served to first-class passengers on domestic flights, and to all passengers on international flights (though with some variations between menus). The pilot and the in-flight crew will also usually receive a meal.

From the kitchen to the sky

The very first step when it comes to in-flight catering for commercial airlines is to hear from the client, much like a traditional catering operation: who the customer is (which airline), what is the route (the starting location and the destination), what is their brand identity, and what types of menus are they looking for? 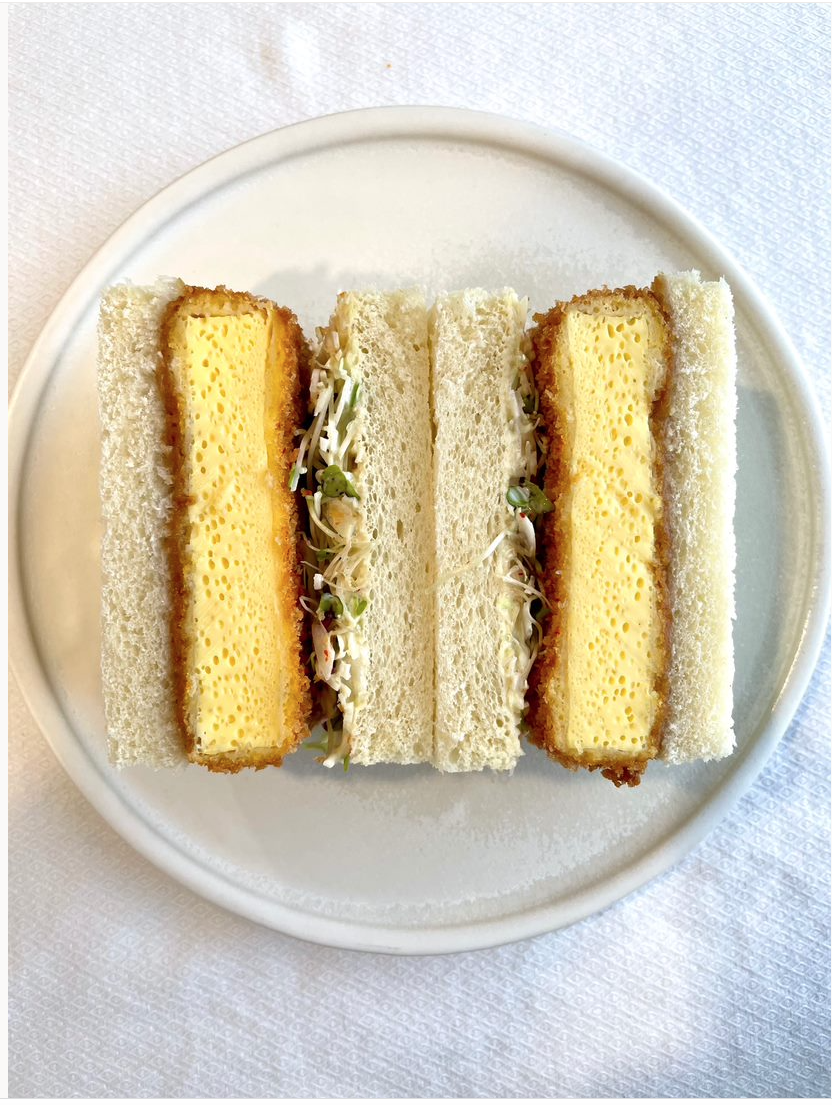 Once they know the order, the catering teams will get to work developing menus.

“It takes quite some time for us to do that because we have to look for recipes that will be able to fly well,” Harribey says.

Beyond their executive catering chefs, Gate Gourmet also works with a team of Innovation chefs who help develop new recipes to alleviate some of the pressure off the catering team. 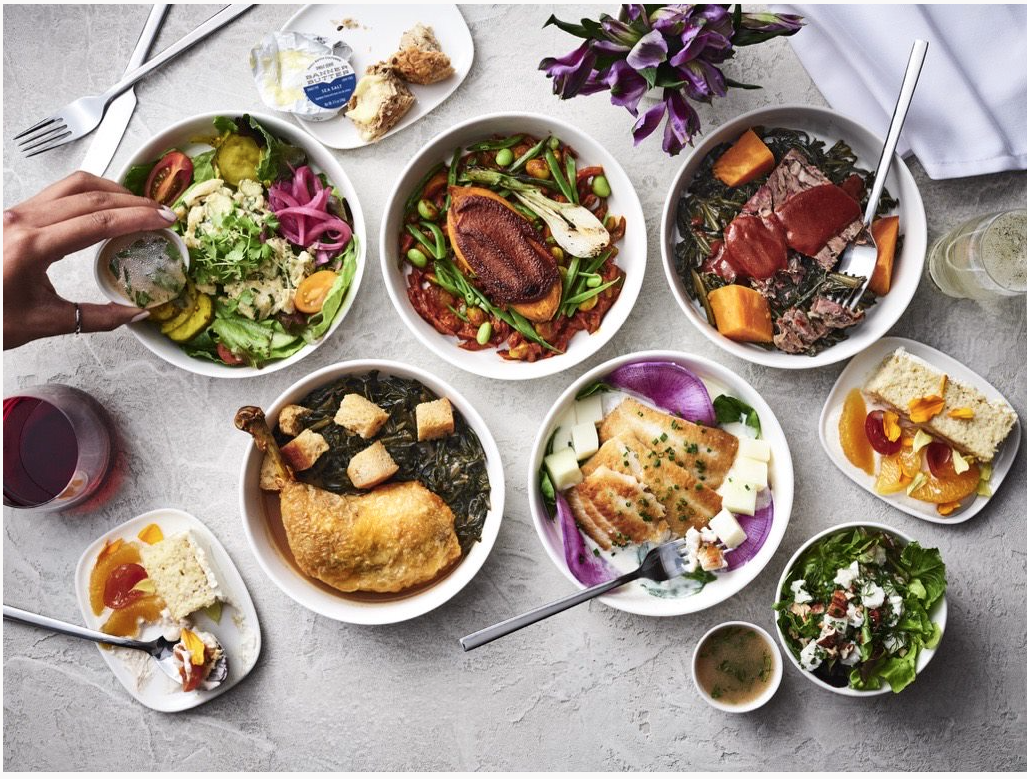 “Chefs were getting bogged down with the operations and it became very difficult to manage an operation and be creative,” says Molly Brandt, an Innovation Chef for Gate Gourmet. “If you think of it in terms of fashion, I’m designing the couture line and then I hand these recipes over to our design chefs who make it fast fashion—they’re the ones who make in-flight dining possible, they have all the experience with the operations.

“What I produce may not necessarily be what they can produce, but the idea is there, and it helps them with their creative process. It’s up to the design chef to decide how much of that recipe they’re going to use.”

Taking it to the tray table

When developing menus, there are unique considerations for chefs, specifically what will travel and reheat well. There’s a common misperception that in-flight meals are frozen, but 95 percent of meals are made fresh daily, according to a video from Eater.

“We just don’t want to come up with some great new fancy ideas,” saidChef Gerry Gulli, Executive Chef with United Airlines in the CNBC interview. “We just want to make sure that the outcome is going to be executed the way we want it day in and day out.”

“It’s that reheating piece that gets a little tricky with certain foods,” said Chef Christian Hallowell with Gate Gourmet in the Eater video. “You’re probably never going to have a good French fry on an airplane.” 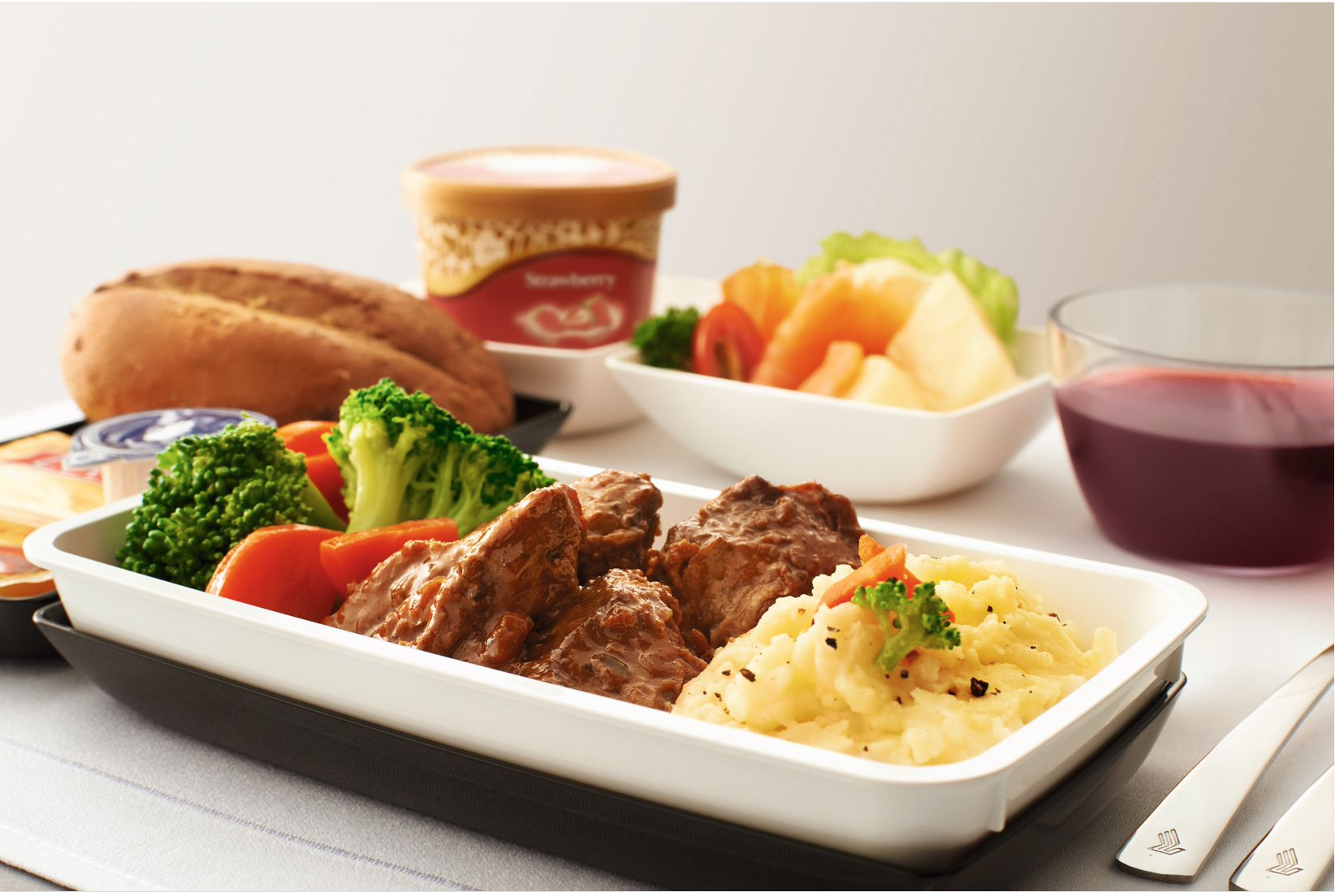 When weighing ingredients for inflight menus, fruits and vegetables with more water content (such as tomatoes and cucumbers) will travel much better than greens with less water content.

“When you’re flying and you get a green salad, the air in the cabin is so dry that it sucks the life out of it,” Brandt says. “Tomatoes or cucumbers are so much more satisfying to eat than a dry piece of lettuce.”

For proteins, the tried-and-true superstars are seabass, meatballs, and other fatty meats. Red meats can be done in-flight, but it becomes more difficult.

“It’s delicious when it’s medium rare and you’ve just taken it off the grill,” says Brandt. “When it’s reheated, not so delicious.”

Here’s a look at in-flight catering by the numbers, according to CNBC and Emirates Flight Catering, which is an in-flight catering service based in Dubai, United Arab Emirates that provides catering and support services for Emirates Airlines and all other airlines based at Dubai International Airport.

Wet-based cooking methods (braising, stewing, etc.) typically work the best for proteins for in-flight meals, according to Brandt, and appetizers most always need to be cold. 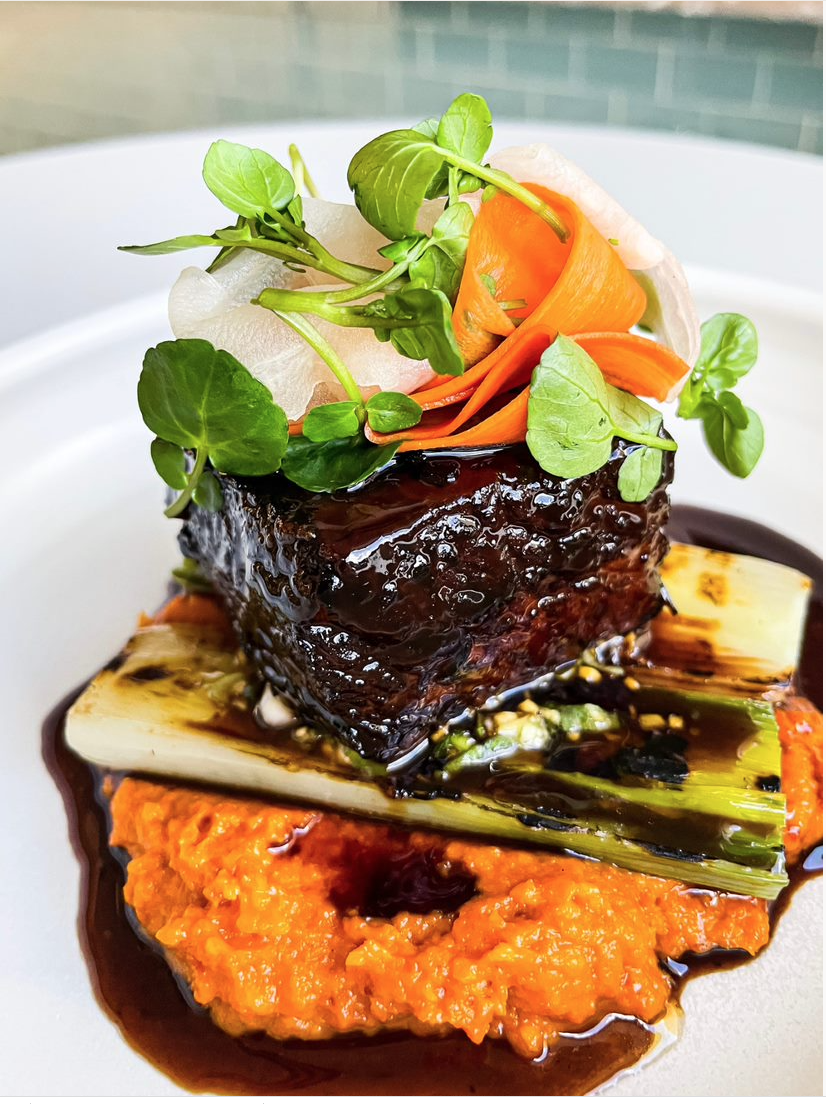 There is also a lot of taste testing thatgoes into the menu development for in-flight catering because as altitude increases, the humidity decreases which leads to passengers losing about 30 percent of their taste buds, says Brandt, so food ends up not tasting as pronounced as it should.

“You want to push the salinity in some of these things,” she says. “You need to balance flavor profiles all across the board.”

Bolder, more vibrant mixes of herbs and spices are utilized to bring out the flavors and compensate for the altitude as well as dryness in the cabin.

For taste testing, the chefs and representatives from the customer will reheat the items to mimic how they will be reheated in-flight, and they’ll also plug their noses which can oftentimes mimic the loss of taste buds in-flight.

“It’s quite intense,” says Harribey. “There are so many dishes to prepare, to taste, and then we must adjust them based on the customer request. There’s quite a bit of time between development and when it’s going to fly.”

Meals are typically prepared the day prior to being delivered to the aircraft by a large team of chefs, the number of which is dependent on the size of the airline and/or aircraft and how many kitchens they have. Chefs are split between various stations, such as grilling and searing, sauces, starches, and vegetables. Plates are meticulously weighed by the kitchen staff before being plated into the to-go containers. 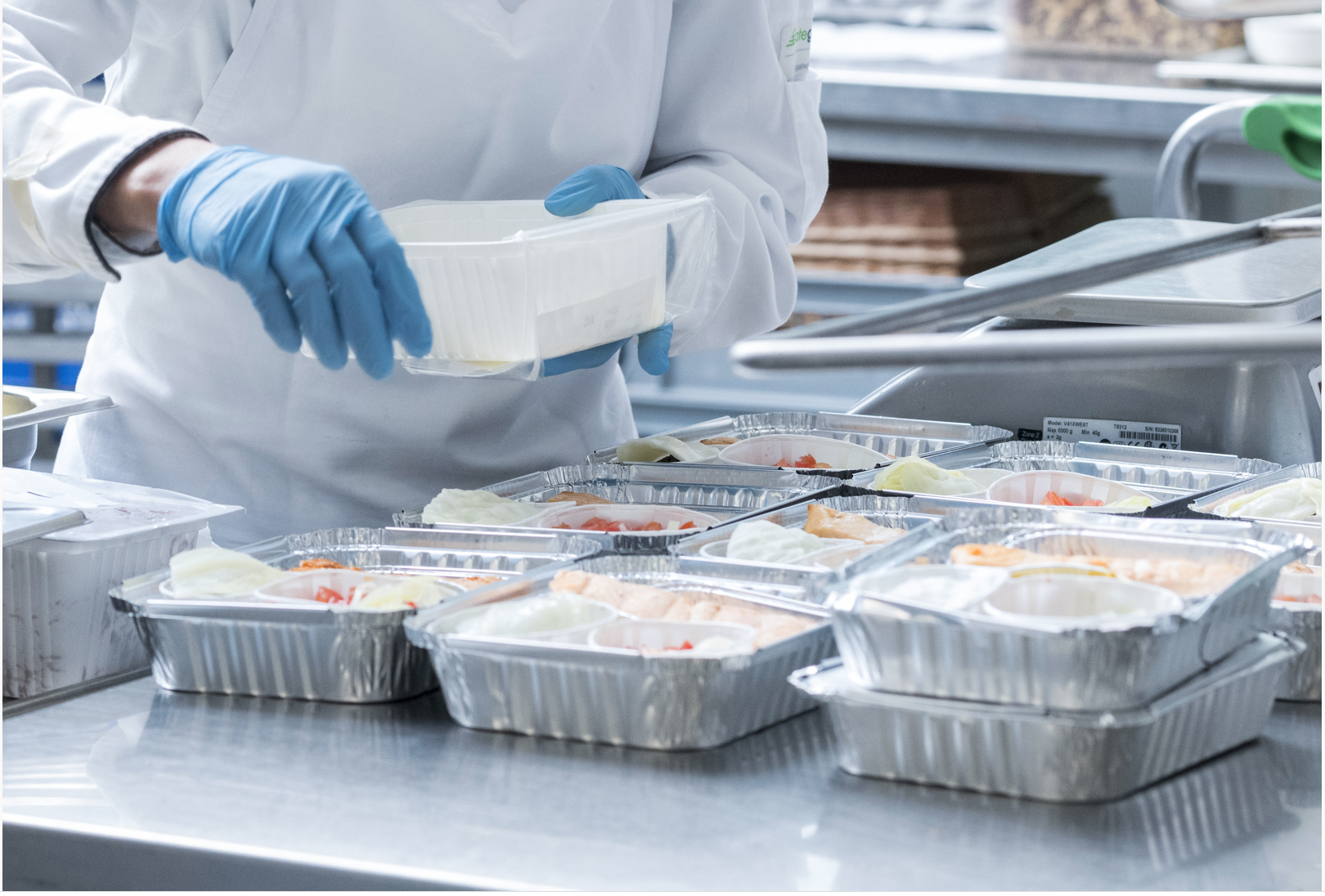 Once the meals are packaged, they are then blast chilled and packed in dry ice before being delivered and loaded onto the plane.

“Once it’s on the plane, we’re not getting it back,” says Harribey. 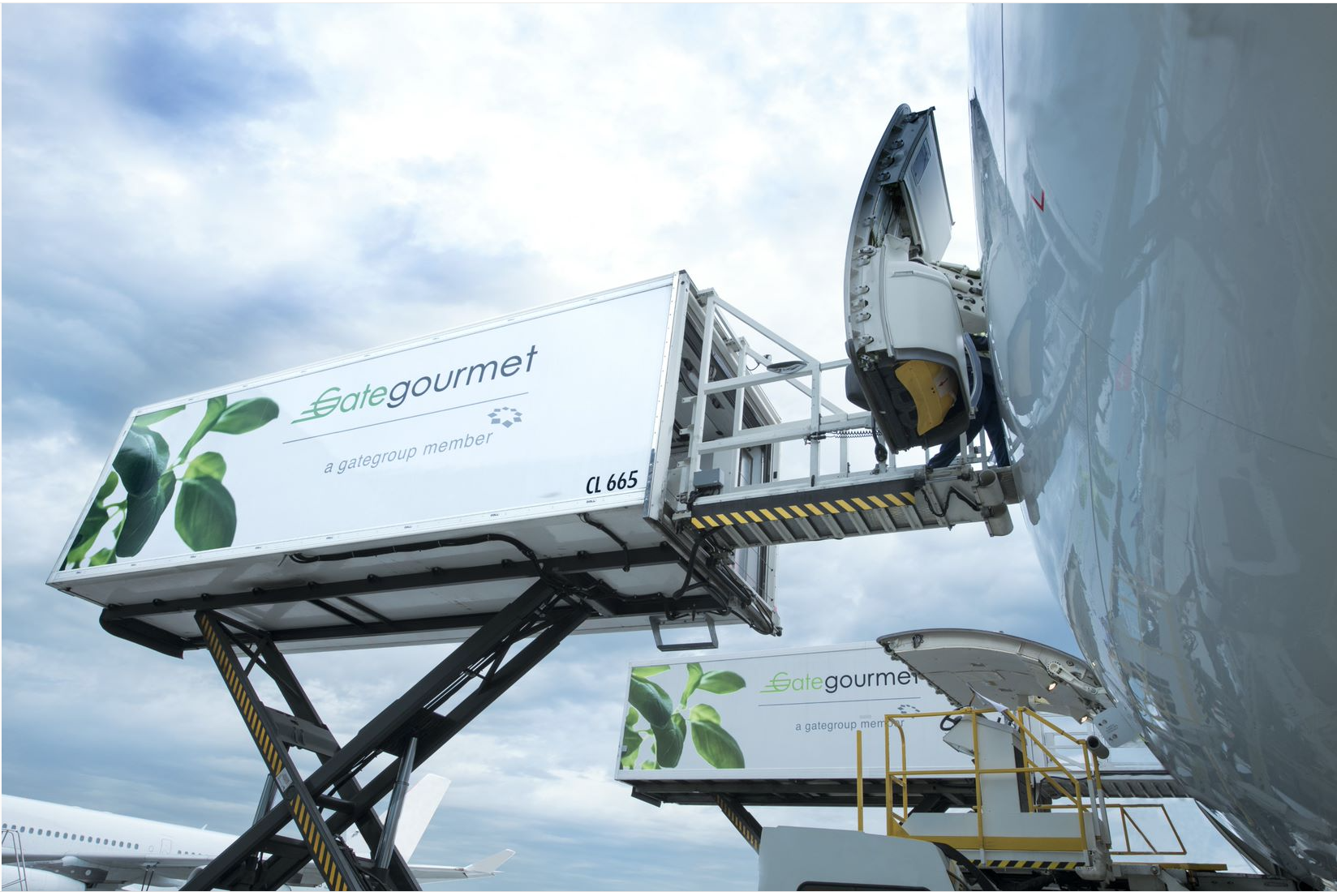 The final flourish for an in-flight meal lands on the shoulders of the flight attendants who must reheat everything to the chef’s instructions, before referring to the photos that were provided to achieve the proper plating.

“All of those things make a big difference,” says Brandt. “There’s a lot of method in all of this—the end result is very precise.”

Unfortunately, not everything always makes it to the tray table as food will need to be discarded as the result of flight delays and cancellations.

“Yes, it’s challenging, but if we can do that, it’ll be part of an incredible experience that customers will remember,” said Jaime Jewell, General Manager for Brand Strategy Experience for Delta Airlines in the promotional video.

“When you’re not in this business, you don’t realize what we need to go through to make it happen,” says Harribey.

Airlines have continued to make enhancements to its onboard meals.

For example, Delta Airlines has partnered with Hopkins as well as chefs Michelle Bernstein and Danny Meyer, New York City restaurateur and CEO of the Union Square Hospitality Group to showcase ingredients sourced at the height of flavor, from artisan, local smallbatch producers. 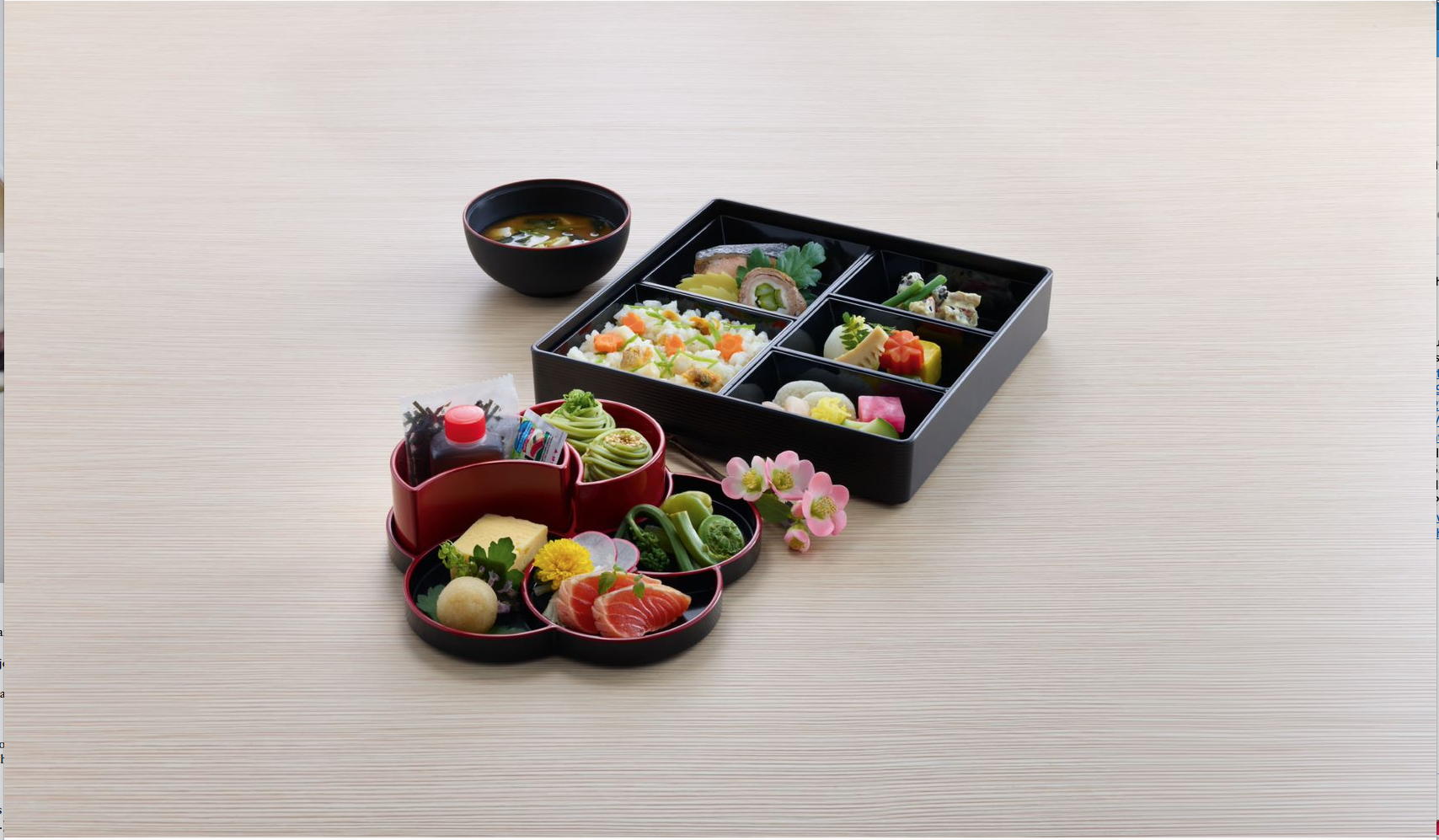 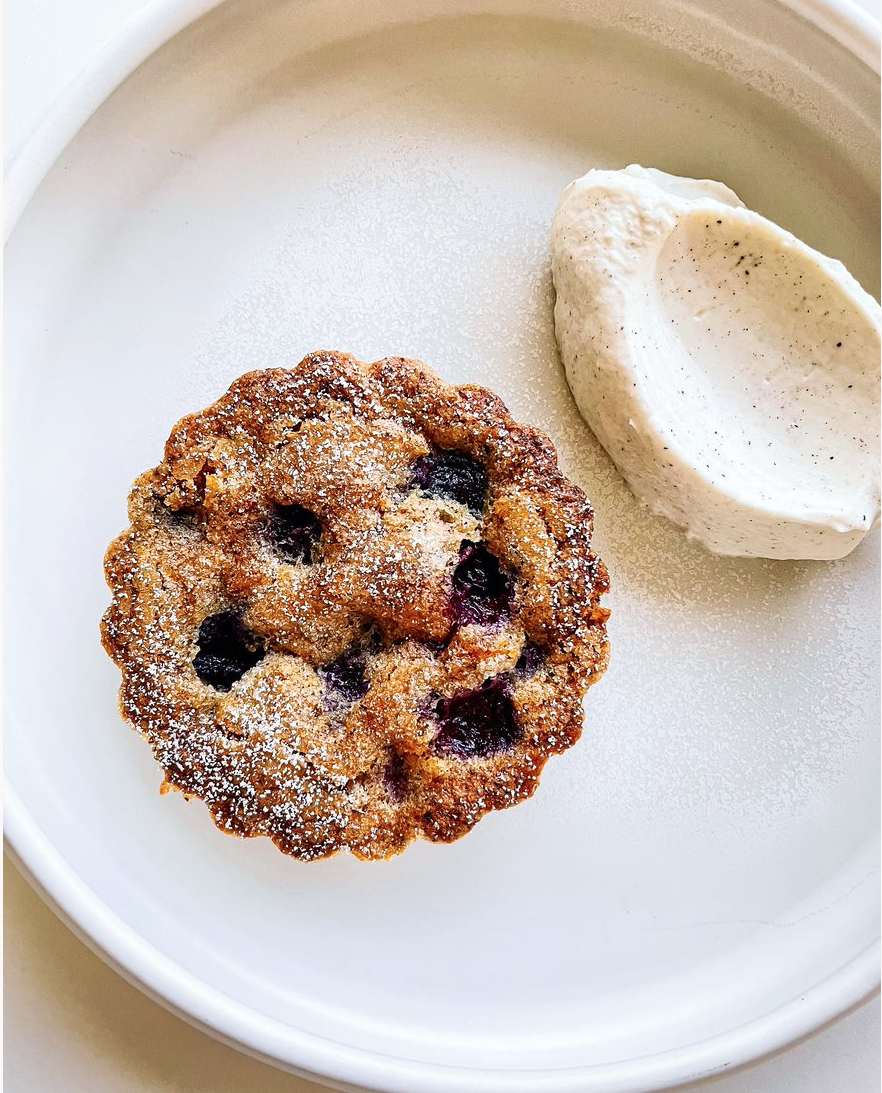 Seasonality has also become a hot trend among in-flight catering to ensure meals feature fresh-picked vegetables at the peak of flavor—bringing the farm to the tray table.

Regional and international dishes have also become increasingly popular for in-flight meals as a way to not only accommodate passengers from all over the world, but to also bring a little bit of the destination on board. For example, Delta has partnered with its sales teams in Europe, the Middle East and Africa, Latin America, and the Asia Pacific, to incorporate food and beverages that resonate with the airline’s global customers by offering regional entrees from various regions, including Spain, Italy, and Germany for its European customers. In Latin America, customers can enjoy local fare such as Alfajores from Argentina, Inca Cola from Peru, and Guarana from Brazil.

“We’re paying homage to that specific cuisine,” says Brandt. “You don’t want to end up with something inauthentic or poor fusion.” 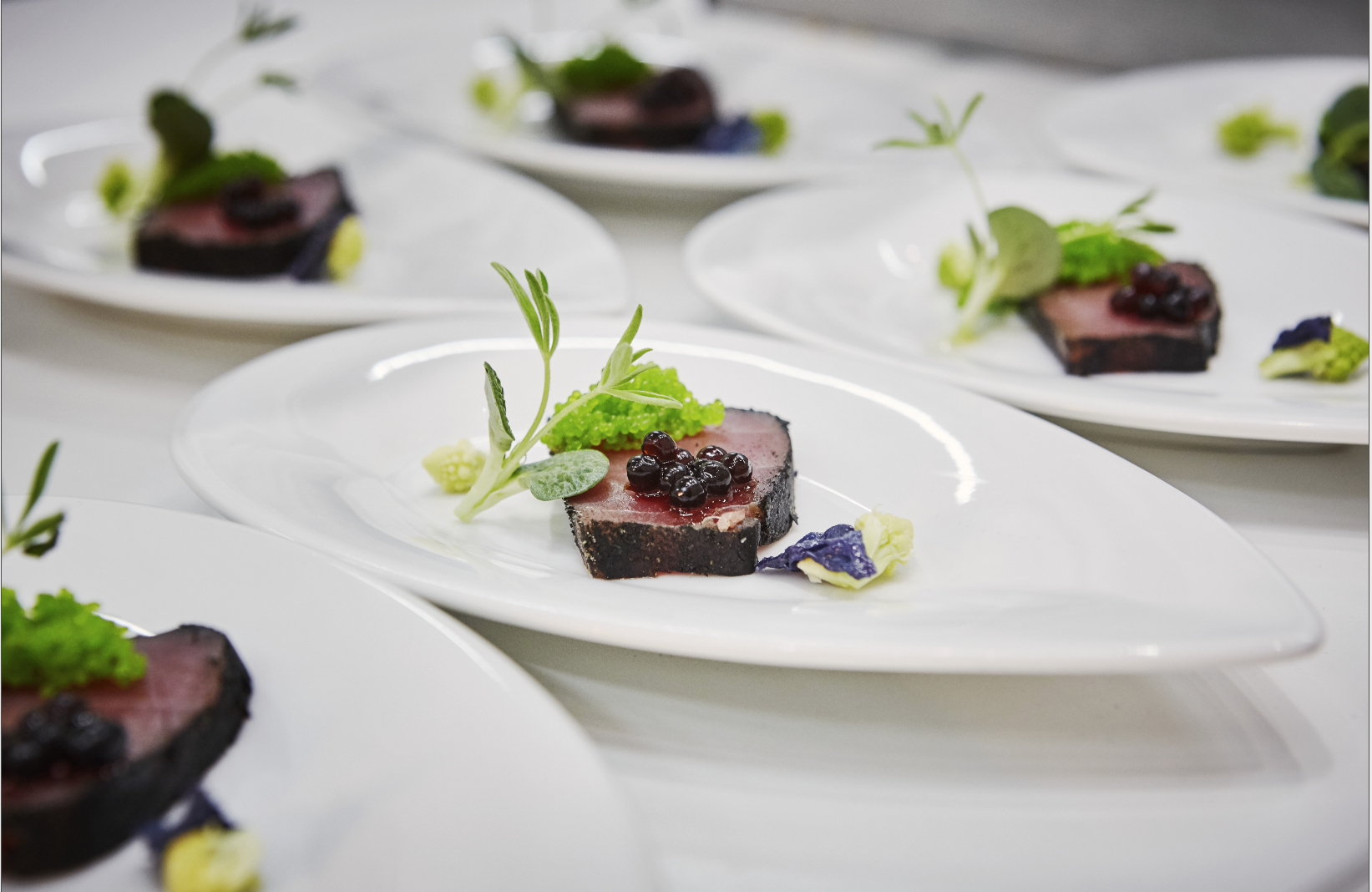 Many airlinies are starting to partner with local farms and producers to bring more fresh. regional ingredients to their in-flight menus. Photo courtesy Gate Gourmet

Brandt says she’s always keeping a close eye on the culinary trends (vegetarian, fermented foods, etc.) of today and how to successfully translate them into in-flight dining.

“I’ve worked in all areas of catering, so this is the last frontier for me,” she says. “The food that I made a year ago to now has seriously evolved because you start understanding that things are more successful than others—the more you fly the more you understand. “You start paying attention when you’re in the air because that’s where the rubber hits the road.”