As Seen in Las Vegas

The Toyota National Dealer Meeting, held earlier this fall at Mandalay Bay in Las Vegas, was certainly a flavor-forward event for all those who attended, thanks in no small part to the team at the aptly named Flavor Forward Events, Pam Smith and Katie Ayoub.

During the Toyota National Dealer Meeting, dealers and associates from across the country came together for a spectacular two-day event that included brand and product immersion, live entertainment, as well as elegant food and beverage offerings.

“This year, Toyota was looking to level up the food and beverage experience and we were charged with overseeing the execution of memorable, singular flavor moments,” Ayoub said. “Toyota does such a great job of telling their brand story at this event, through lighting, design, and sound elements, and really drawing attendees into the space and bringing that brand story to life. So, Pam and I wanted to weave food and beverage into that narrative and make it part of the theming. Rather than provide the same catered-event fare throughout the entire event space, guests this year experienced unique menus in each of the ‘zones’ they visited.”

Flavor Forward Events, in partnership with SMZ Consulting—a food and beverage consultancy—worked in lockstep with the Mandalay Bay banquet teams and five guest chefs, putting forth Toyota’s vision of a next-level guest experience. Here’s a look at a few of the themes and how the food paired with the vehicles.

In the zone where Toyota displayed many of its off-road vehicles, attendees encountered a food station titled, “Campfires & Cookouts—Off the Beaten Path,” where each dish was touched by fire, carrying forth the idea of fun adventure and off-road exploration and offering guests creative takes on campfire favorites. 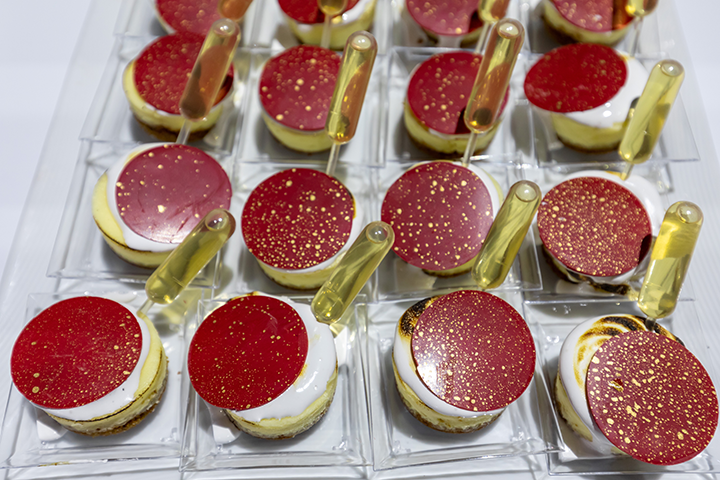 To capture the spirit of off-road adventure, some of the food offered was themed around campfires and cookouts. These Mini Bourbon Cheesecakes featured a burnt marshmallow fluff topping and a gingersnap crust. A chocolate coin painted “Toyota Red,” helped drive home brand messaging in a playful, pleasing way.

Other offerings within this zone included: a Chile-Lime Cedar Plank Salmon with ember-roasted root vegetables and hearty herbs; and a Mini Bourbon Cheesecake with burnt marshmallow fluff topping and gingersnap crust.

A Day at the Races

When guests ventured into the Motorsports area, the flavor experiences at the food station, themed “A Day at the Races,” worked in harmony with all the other storytelling elements in that zone to add texture, color, aroma, and flavor. One whimsical dish was Mac and Aged Cheddar Cheese Bites, crusted with Creole-spiced crushed Goldfish crackers. 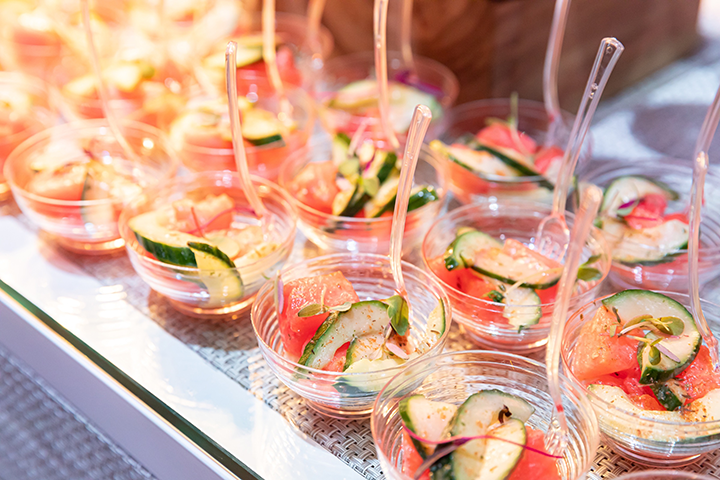 At “A Day at the Races” the Salted Watermelon and Cucumber Salad with Tajín offered an elevated spin on roadside chili-dusted fruit.

This year, Toyota also featured an outdoor space as part of the event. It featured heritage trucks and a decked out cocktail lounge. To fit the vibe, Flavor Forward Events created a menu of handcrafted cocktails themed around each of the trucks, along with trend-forward passed small plates. The Executive Highball Bar, for example, matched a historic off-road truck with a drink called the Off-Road Desert Paloma, with tequila, mezcal, lime, guava, grapefruit soda, and a rim of black salt. The passed plates included an elevated take on a deli classic using lamb charcuterie: the Mini Lamb Pastrami Reuben Sandwich, with melted Gouda and fennel slaw, was served over a chili rémoulade, for dipping.

“The themed flavor stations were curated to breathe life and whimsy into each vehicle zone,” Smith said.

Some of the additional zones and menu offerings during the Toyota National Dealer Meeting included:

Beyond the themed food zones, several of the food stations embraced the power of flair, spectacle and creativity. For example, the “flair stations,” including torching desserts, tossing pasta in a parmesan wheel, and cooking on planchas to order, added drama and gave guests an immersive taste of the experience. 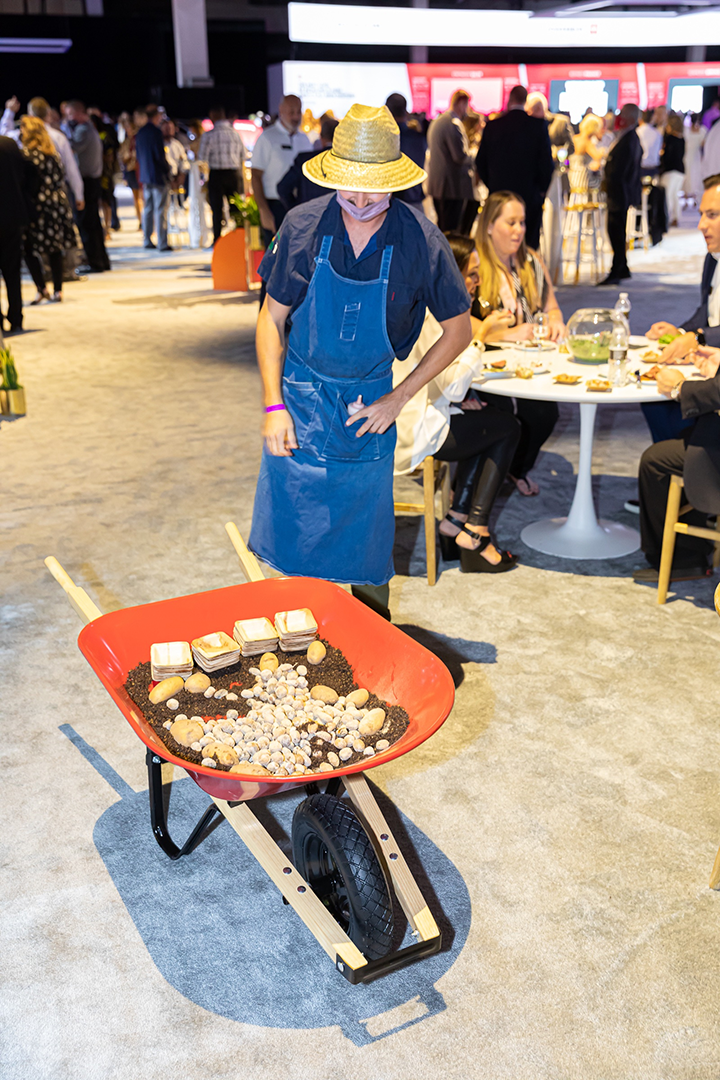 On night two of the event, Chef Jamie Simpson put on an immersive farm experience called “The Farmer’s Market.” His Roving Wheelbarrow of Papas Saladas involved a server dressed as a farmer pushing the wheelbarrow around, filled with Colombian-Style Salted Heirloom Potatoes. Guests used a fork to extract a hot potato, and the ‘farmer’ drizzled Field Pepper Emulsion over top.

Additionally, one of the featured chefs, Jamie Simpson with The Culinary Vegetable Institute and Chef’s Garden, brought a bit of whimsy to the event with his “Hive Mind” and “Roving Wheelbarrow.” 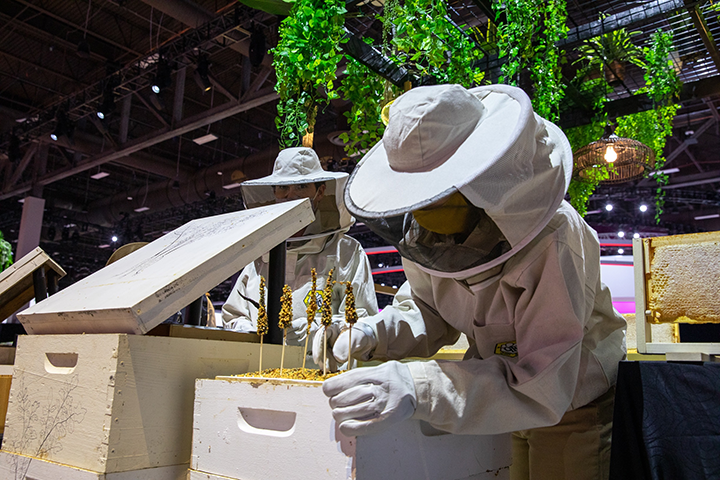 Chef Jamie Simpson and his crew of “beekeepers,” delivered a “Hive Mind” experience, serving four menu items out of custom-made wooden hive bodies. Pictured here, the crew is preparing “Carrot on a Stick,” glazed with fermented honey and coated in puffed rice and thyme.

With the “Hive Mind,” Simpson and his team dressed as beekeepers, and served menu items out of custom-made “hive bodies,” wooden boxes that typically house bee colonies. The dishes included Whipped Honey with cherry blossom foam and bee pollen. The following night, Chef brought an immersive farm experience to the event. His “Farmer’s Market” involved a server dressed as a farmer pushing a roving wheelbarrow around, filled with Colombian-Style Salted Heirloom Potatoes. Guests used a fork to extract a hot potato, and the ‘farmer’ drizzled Field Pepper Emulsion over top.

“Food engages all of the senses, when it’s done right,” Smith said. “It forges emotional connections and creates visceral memories. For event planners, that’s the goal, right? Making connections and being memorable.” 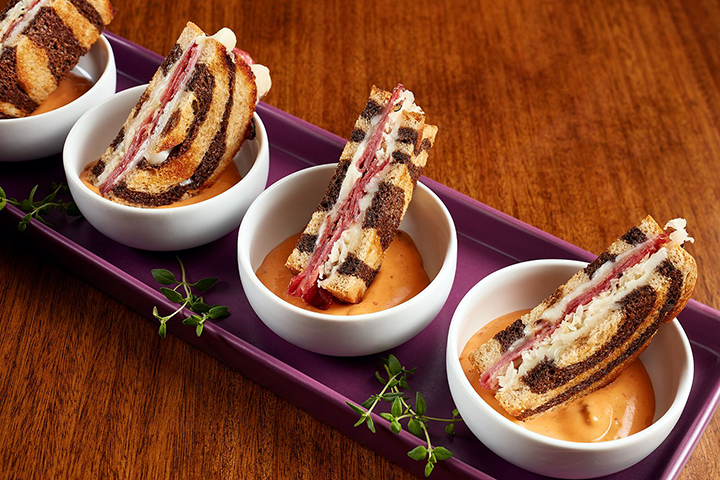 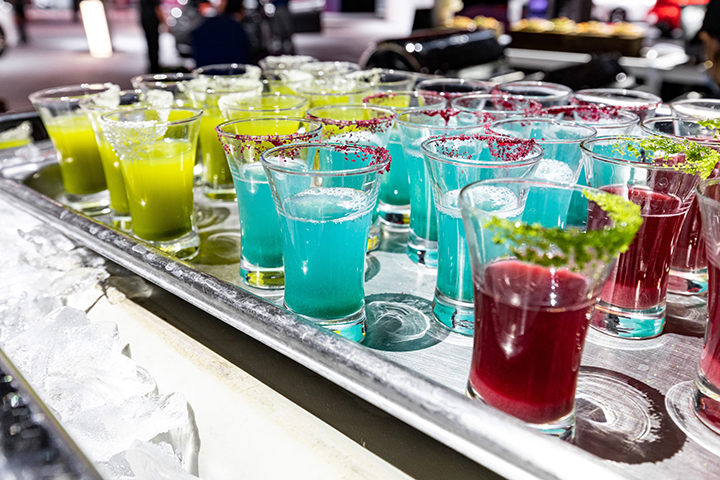 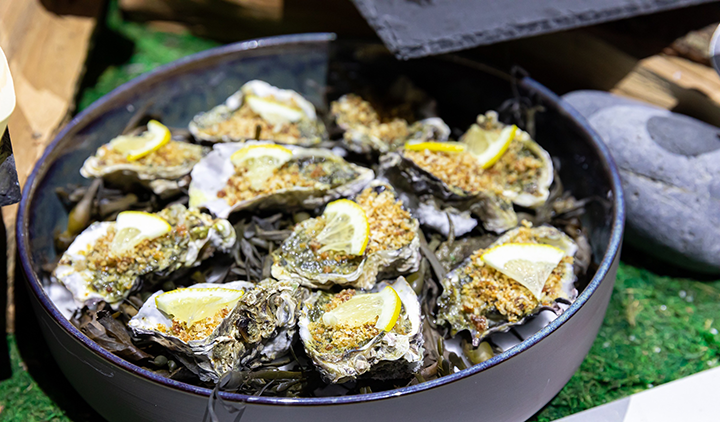 Chef Brian Howard’s station was strategically placed in an area where Toyota’s cutting-edge Gazoo Racing comes to life. His food mirrored that sensibility, with offerings like Shigoku Oysters roasted in miso-spinach butter with bacon breadcrumbs. 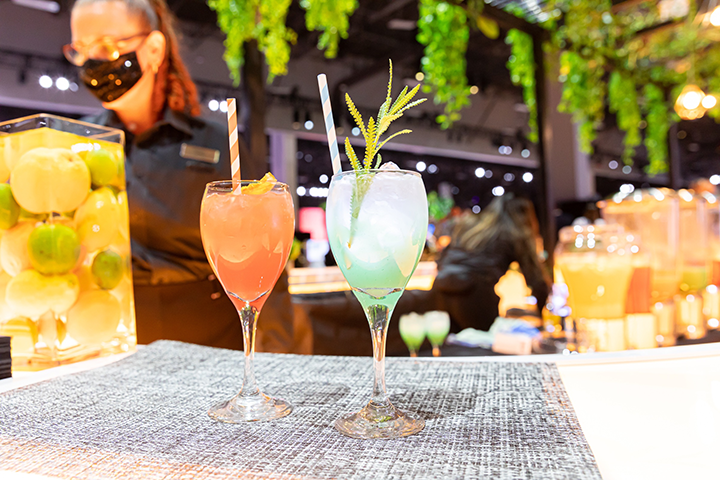 To bring in a “radiant oasis” theme, the Botanical Bar was designed with fresh blossoms, hanging greenery and fragrant aromatics. Flavor Forward Events worked with Kim Haasasrud, owner of mixology firm Liquid Architecture, to create a fun, colorful selection of drinks, including the Sumac Swizzle (L) with rum, blood orange, and sumac; and the Brilliant Blue, with vodka, ginger, lychee, lemon, blue algae, and club soda. 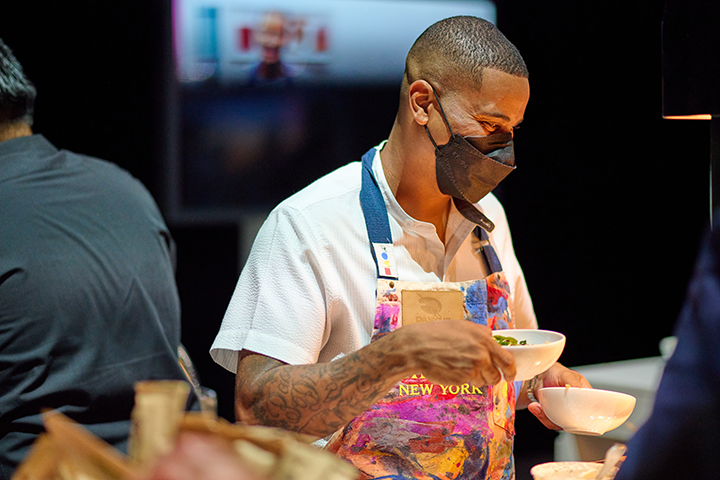 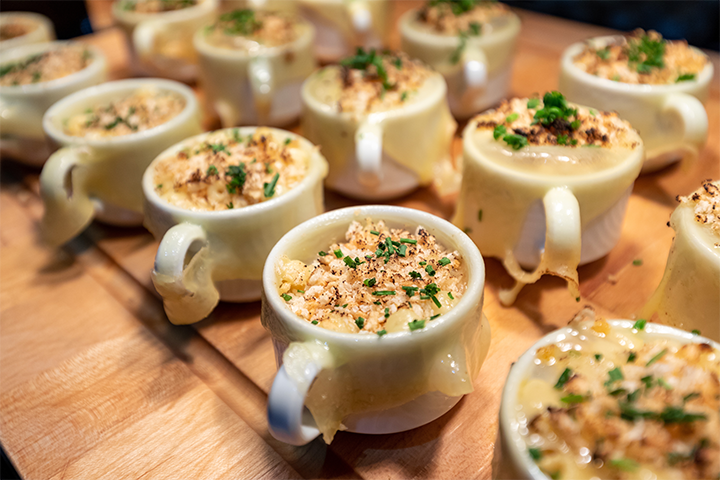 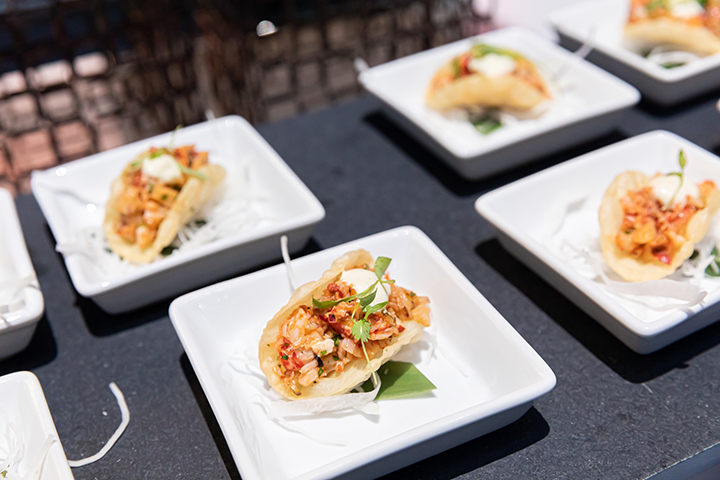 The design team built out an exquisite space at the event called Tokyo House, which showcased the incredible team from Nobu. On Night Two, the menu’s theme was “Nobu Street Food,” and included lobster tacos with Amazu soy sauce, red onion salsa, and aji amarillo aïoli.