Are you lucky? This is one of my favorite questions to ask candidates interviewing for a job at Footers Catering. My initial response when people inquire about why I would ask such a silly question is to jokingly reply; “I don’t want unlucky people working for me.” Seriously though, I think it provides great insight into how people view the world. 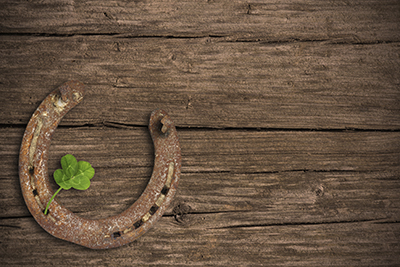 I’m sure many of you have experienced the phenomenon of “seeing what you’re looking for.” Most times this is illustrated in the new car scenario. You purchase a new car and suddenly you see that car everywhere on the roads almost as if a bunch of people found out you were buying that car and suddenly went out and bought that same car. Most likely all those cars were there prior to your purchase—you’re just more likely to notice them now because you have one too.

The same thing has been proven with luck. In a study done by Richard Wiseman participants designated themselves as either lucky or unlucky. They were then asked to count how many photos were in a newspaper. The “lucky” people completed the task on average in seconds while the “unlucky” people took on average two minutes. The reason? There was a message on the second page that read, “Stop counting: there are 43 photographs in this newspaper.” Although this message was staring everyone in the face, the unlucky people tended to miss it because they were not open to the unexpected possibility of something lucky happening to them.

Wiseman’s research concludes that lucky people generate their own good fortune via four basic principles: they are skilled at creating and noticing chance opportunities, make lucky decisions by listening to their intuition, create self-fulfilling prophesies via positive expectations, and adopt a resilient attitude that transforms bad luck into good.

I’m fascinated by the fact that these aren’t necessarily characteristics you’re born with, they are all behaviors that can be learned and modified, especially the fourth principle. We are all bound to encounter adversity at some point in our lives. We have a choice to let the impact define who we are, or we can be defined by how we respond to that adversity. I am assuming that most of you, like me, would much rather surround yourself with the people that talk about how they conquered adversity as opposed to those who dwell and lament about how “bad things always happen to me.”

A positive attitude is one of the key predictors of success. People who maintain that positivity are often responsible for creating their own luck and in turn enhancing the amount of luck in their lives. So the next time someone asks you; “Are you lucky?” Will your answer be different than when you began reading this?

Anthony Lambatos is melding the historic Footers name with new and exciting trends in catering. He grew up in the business, from scraping plates for his dad, founder of Footers Catering Jimmy Lambatos, to hosting his own concession stand at Parade of Homes in high school. He has worked full time for Footers Catering since 2004 as Vice President and became Co-owner and CEO at the beginning of 2010. Anthony is passionate about taking the knowledge he has learned from his father and putting a fresh spin on it.