The Great 'Wokening': Conversations about Race in Catering & Events

Pain. Anger. Frustration. Despair. Fear. Passion. These are just a few of the words that can be used to describe the past several weeks around the country. People everywhere watched in horror as George Floyd died while in police custody in Minneapolis, MN. It was a moment of brutality and injustice that has awakened a sleeping giant, by giving rise to protests and riots across the country. But also, conversation and action.

“A lot of people are waking up, it’s the great ‘wokening,’” said Terrica Skaggs, owner and chief wedding planner for Cocktails & Details, during the June 8 webinar ICA Listen and Learn Diversity and Inclusion in the Catering Industry. “People are starting to see the disparity.”

Yet for the people of color who have experienced near-daily bouts with racism and prejudice, the giant was never sleeping, it was just being ignored.

“(Racism) isn’t new, (it happens) every day,” said Brian Green, owner and wedding planner for By Brian Green during the June 4 online townhall Healing Wounds & Bridging Gaps: An Honest Conversation About Race & Allyship in the Wedding Industry. “I don’t want to hear excuses anymore; I want to hear plans. It’s not enough to be not racist, you have to be anti-racist.”

For many across the country, George Floyd’s death has provided the impetus for real change. It has also prompted reflection into the need for a more meaningful balance of diversity and equality within our industries, catering and hospitality included.

“I’m sad that it takes yet another murder, or yet another hashtag, or yet another cell phone video for people to wake up; they’ve been talking, and we haven’t been listening,” said Jamie Lee Quickert, director of catering for Detroit Institute of Arts during the June 4 townhall.

Recently, Quickert experienced a moment of true enlightenment. During a speaking engagement, she stepped onto the stage and looked out upon a sea of color. “It was shocking to me to be only one of the white people in the room because I never experienced it,” she said during the June 4 townhall, “and suddenly I felt how alienating we could be.”

Quickert, like so many other white people, didn’t routinely see the overt bias and alienation that people of color experience, explaining that it can be difficult to recognize a problem when everything you see, “looks like me.”

“A lot people don’t even realize it and are a little clueless that it’s happening because it’s just been that way,” said Jolie Oree-Bailey, executive chef and CEO for Low Country Quisine, during the June 8 webinar. “We just get comfortable in seeing what it’s always been because it’s so deeply ingrained in our country. It’s going to take a lot of work to get that out of our mindset.”

But it’s there, and the lack of diversity within the industry can be seen in many forms.

There are also countless “micro biases” such as a client seeking out a white salesperson rather than speaking with a person of color.

“Venues or vendors would rather talk to my white colleague rather than dealing with me,” said Alexandria Hammond, director of sales and event production for Get Plated Catering and Events, during the June 8 webinar. Little do they know, said Hammond, that as a co-owner, the final decisions indeed rest with her.

What can we do?

“This has to be dismantled by white people,” Skaggs said during the June 4 townhall. “People have to literally start putting skin in the game.”

“The underlying question is, how do we move forward? We can’t rely on the government to help us,” said Roy Porter, in a separate conversation after the June 8 webinar. “It starts with us and setting a good example of diversity and inclusion.”

Brownlee, in her article, suggests doing things such as reaching out and getting to know more people of color; joining a diversity committee—or starting one; talking to your children about race; insisting upon diversity on leadership teams; and challenging your own stereotypical beliefs.

“(White people) have great hearts, but they need to be educated so we can come together to make a difference,” Oree-Bailey said during the June 8 webinar. “It’s a lot to unpack, but we have to start talking about it."

Skaggs agrees that feeling uncomfortable is a great place to start.

Examine the list of people you employ, or vendors you work with. What percentage are people of color, and what types of positions do they have? Are they primarily in front line leadership and/or sales roles, or are they back of house kitchen or service staff? “If your sales staff is all white, and your kitchen staff is all Black, we have a problem,” Green said. “We’ve all seen it and we know it’s happening.”

“I feel like we are inclusive, you see a lot of representation, but I’m not sure if we’re always inclusive,” Skaggs said during the June 8 webinar.

“Diversity is asking someone to the party; inclusion is asking them to dance.”

Regarding vendor partners: How many of those companies are owned by people of color? How well do these vendors accommodate the needs of people of color? Can photographers correctly edit non-white skin tones? Do stylists understand the complexities of non-traditional hair textures

But most importantly, if you have to ask yourself if your staff feels comfortable in the current environment and do people of color feel comfortable coming to you with their business.

What else can you do?

Skaggs challenges everyone in the catering and events industry to reach out to creatives who are people of color. Seek out businesses of color that you can work with. Feature events and weddings where the majority of guests are people of color. Speak up when you hear something small-minded or prejudiced. And most importantly, don’t reserve these actions to just this moment.

“It’s not just about what’s happening today, or happening this week, or happening this month,” said Heather Benge, founder of Styled Shoots Across America during the June 4 townhall. “We need to keep the conversation going, and not just talk about it and do the black square, but actually do the work.” 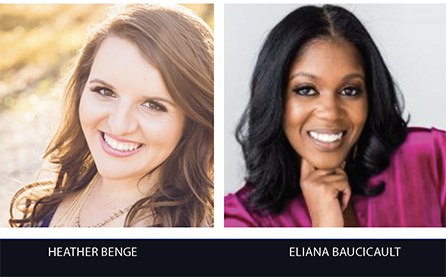 Eliana Baucicault, owner of the B Collective, believes that if the industry can come together, it can only be positive.

“We are the wedding and event industry,” she said during the June 4 townhall. “We celebrate happiness and joy, but how can you be in this profession to create beautiful memories but create horrific memories for the people who service those events? We have to come together and have a conversation.”

Kathleen Stoehr contributed to this article.

Amber is the Content Producer for Catersource. Amber previously worked as a Communications Specialist for LeClair Group and a reporter for the Woodbury Bulletin, both located in Woodbury, Minn.  As a self-described "foodie," Amber loves to experience the world of...