So yes, they did it backward (at least, in my eyes). They started in 1982 with a traditional Jewish deli and then added catering. I’m talking about Zingerman’s, of course, a name ubiquitous in the city of Ann Arbor, Michigan. If you’re not familiar with the name, fasten your seatbelts—this company went from zero to 60 (that’s million) with a solid practice of open book management coupled with a wide-arcing business plan, called 2020 Vision, incorporating the Zingerman’s guiding principals (see sidebar, bottom). 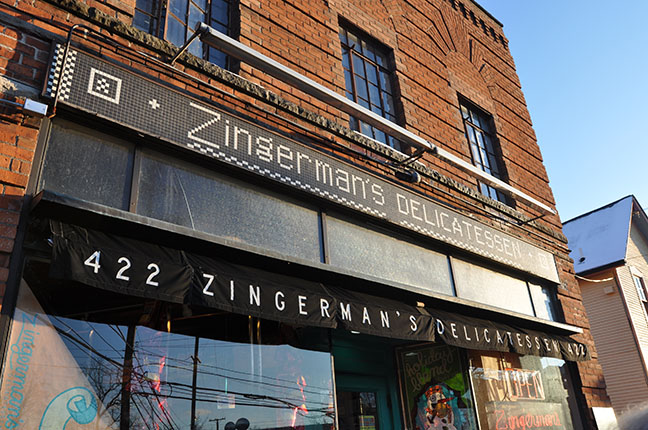 And they didn’t just add catering, mind you—beyond that, the Zingerman’s juggernaut (also known as Zingerman’s Community of Businesses or ZCoB) now encompasses: 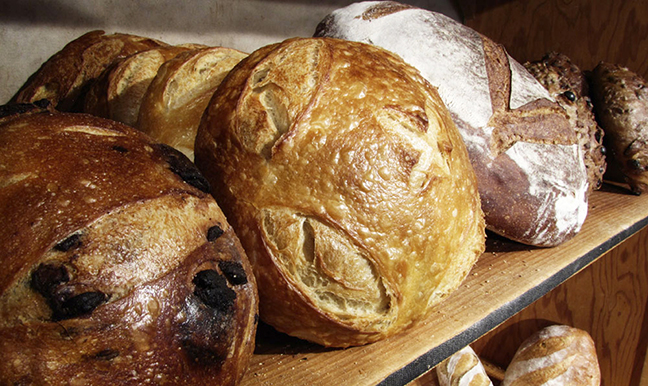 • a mail order division—the online shop for food and gifts that ship anywhere in the US; 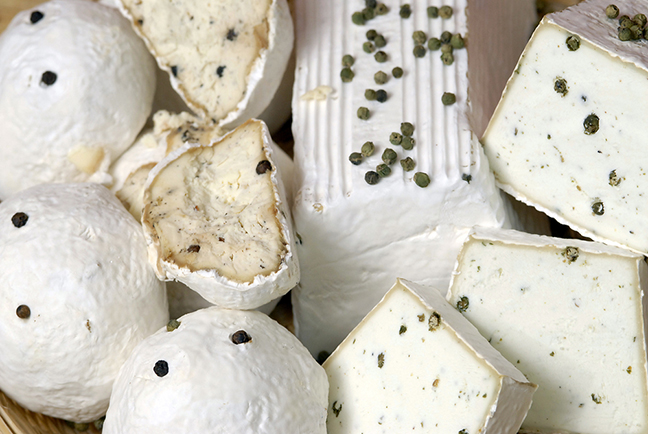 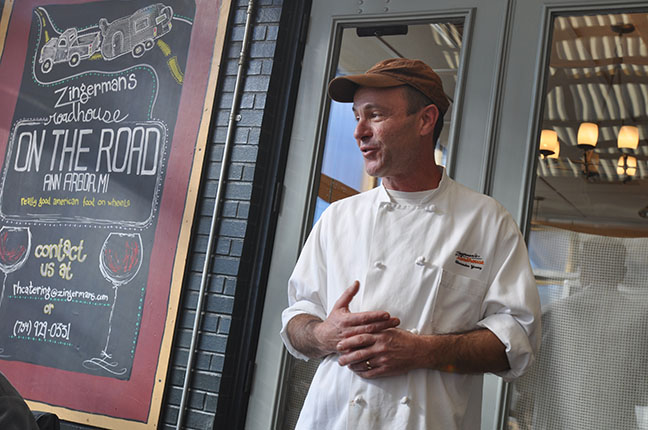 • Zingerman’s Roadhouse, a restaurant with a custom-built BBQ pit outside and James Beard award winner for Best Chef: Great Lakes, Alex Young, in the kitchen; 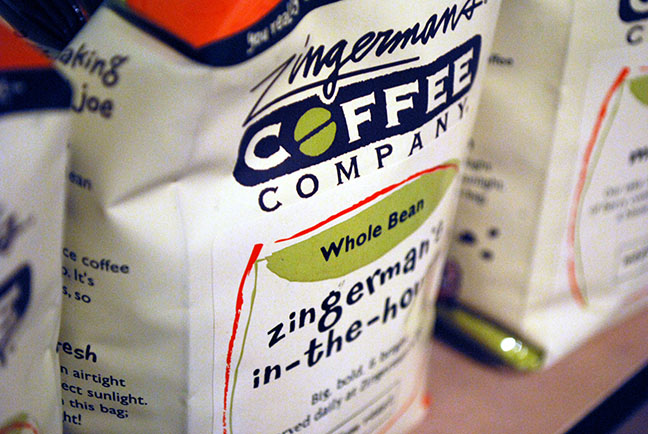 • Zingerman’s Coffee Company (and Next Door Coffee Shop), which sources and roasts the great coffees of the world; 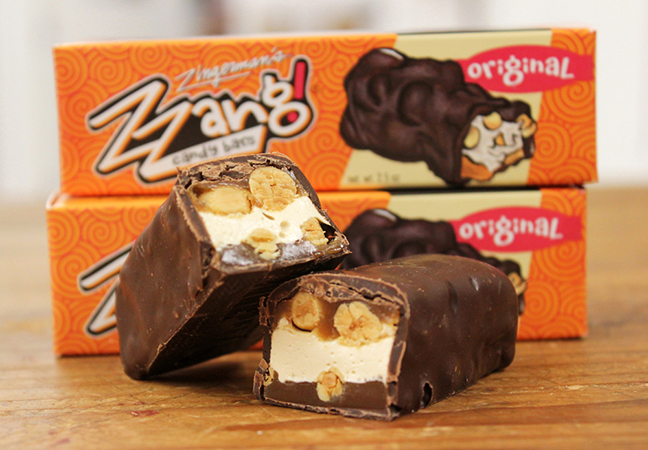 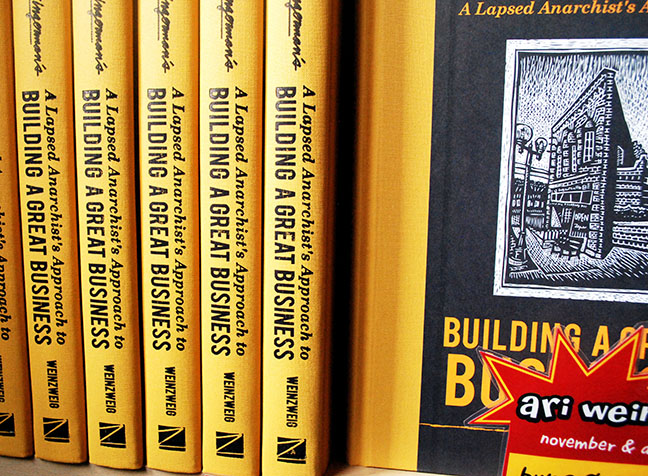 • Zingerman’s Food Tours (Spain and Italy are on the docket for 2016); 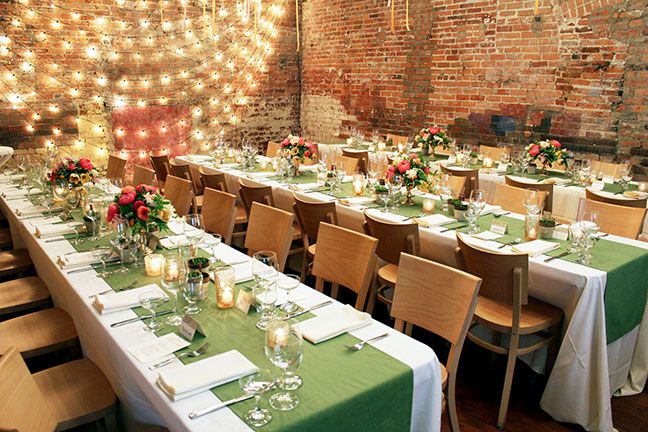 • Zingerman’s Catering & Events (off-premises and drop off also with a small building—Events on Fourth—that hosts about 60 people seated, 80 strolling);

and its newest endeavor, 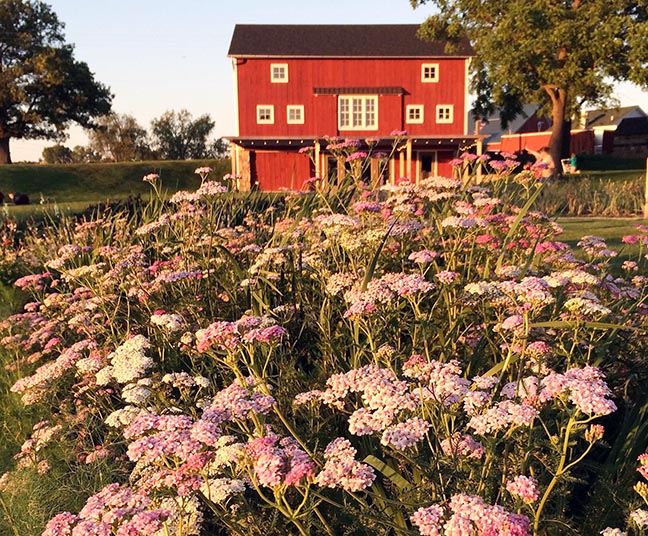 • Cornman Farms, a working farm supplying fresh ingredients to the Roadhouse and Deli, with a renovated barn and farmhouse that can accommodate up to 500 people for catered weddings, private dinners, cooking demonstrations, fundraisers, and meetings. Whew.

“On any given day,” says co-founder Ari Weinzweig, “the Zingerman’s experience is now made and delivered by nearly 700 people—partners, managers, and staff in 10 different businesses in addition to the Deli—to the tune of roughly $60 million in annual sales.” During the holidays, the staff will swell to near 1,000. 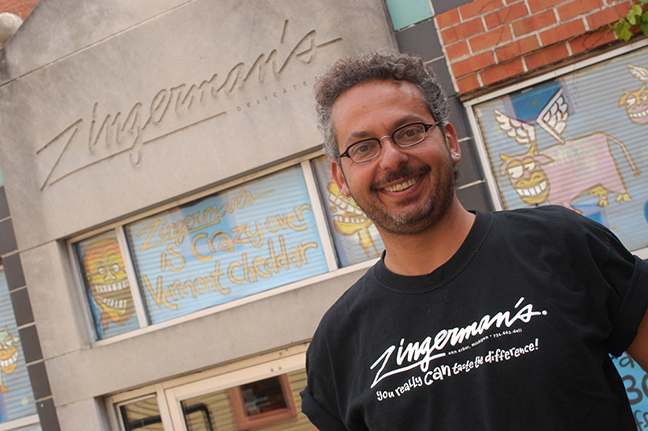 Weinzweig and his partner, Paul Saginaw, however, use a cadre of managing partners for each of their businesses, and then provide the “guidance, support, leadership, and whatever else we need to do” to keep their ship on course.

“Ah, Zingerman’s…my temple of deliciousness,” chef Mario Batali was once noted as saying. He couldn’t be more apt. Each time I have visited Ann Arbor, a visit to Zingerman’s, whether in the form of a Creamery cheesemaking class, a sit down at the Roadhouse, or a swing through the Deli, is always on the docket. The food is exquisite but beyond that—the service is impeccable. Every employee appears very engaged in the experience of being a part of the company. No doubt, the quality of the product being served, sold, or taught creates a lot of this engagement: it’s a matter of pride. But another component is the investment each employee has in the company through the open book management policy.

It was at catering and events arm Cornman Farms, the newest of the businesses, that I received a smidge of Zingerman’s method of bringing finance to the front line: with a quick unclip, managing partner and chef Kieron Hales removed a panel from an upstairs wall in the circa 1834 farmhouse, and flipped it around. The flip side was a white board, revealing lists of numbers: beverage and retail sales, labor, and costs. Called the Department Operating Board, or DOR, Hales explained that the DOR shows, “how many thousands of dollars we are planning to do” in the current month. The green numbers? Those are projected. Blue is the forecast, and black is actualized. “Some numbers are good, some are bad,” Hales says. “Our biggest problem is exposure. People just don’t know we exist yet—even with the Zingerman’s name.” 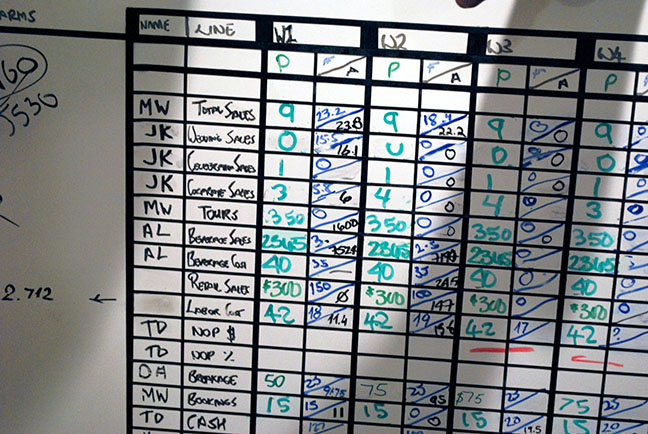 So what is open book management? A business practice of sharing financial and decision-making duties among all employees, it was developed by Jack Stack, founder and CEO of SRC Holdings, who went on to document this practice in two books: The Great Game of Business and A Stake in the Outcome. In a nutshell, it is a radical approach to running a business: anyone can look at the company financials at any time. Even outsiders. “You want to give us a pep talk?” Hales asked. “If you want to come [to our open book meeting], it’s every Tuesday at 9:30 in the morning. It goes until 12:30 and you’re welcome to come and sit there and listen to it. Learn about the good, the bad, and the indifferent.” 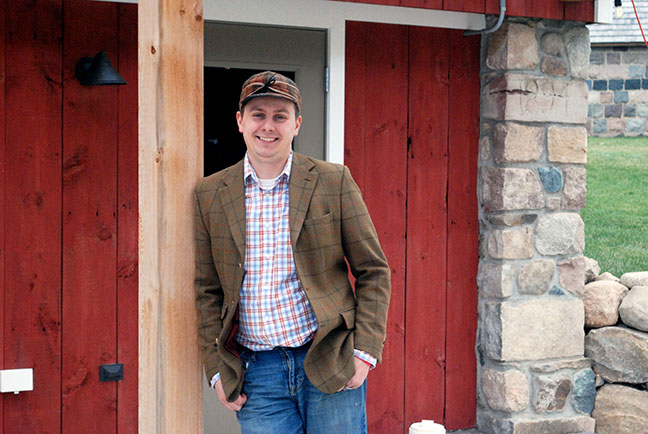 Going further, it’s about taking charge. Every employee participates in running the business, because if they understand how the whole organization works and their role within it, they can contribute to the bottom line—and perhaps identify solutions as opposed to, “one or two managers sitting around going, OK, this is the plan and I’m foisting it on folks who might see some problems with it,” says Pete Sickman-Garner, marketing manager for ZCoB. 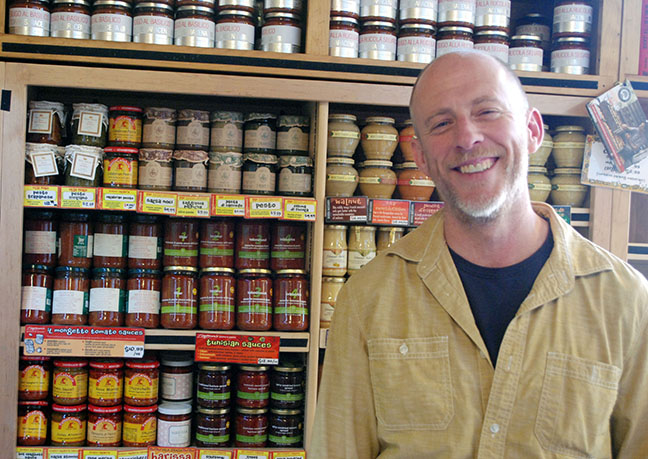 Take the dishwasher at Zingerman’s Roadhouse, for example. “One thing we discovered with the Roadhouse: the food cost was really high and they were struggling with getting the percentage down,” explains Sickman-Garner. During one of the weekly staff meetings, called “huddles,” the dishwasher pointed out that he was always throwing away huge platefuls of fries. “So they decided that instead of serving giant portions of fries, they’d offer a normal size portion, but offer free refills,” Sickman-Garner recollected. “That was an expensive part of our food cost, and it went down as a result. It wouldn’t have happened if we hadn’t had the guy who was throwing it all away at that meeting, helping to make the plan.”

How it all transpired

First off, there’s no real Zingerman. The partnership duo of Weinzweig and Saginaw was formed when they met at a local Ann Arbor restaurant, Maude’s, where Weinzweig was a dishwasher and Saginaw was managing the restaurant. Their new venture was to be named Greenberg’s—a homage to a customer of Saginaw’s—but when another Greenberg of Lansing, MI threatened to slap them legally, a scramble with the Yellow Pages brought them to the made-up name of Zingerman’s. “They were pretty successful right from the beginning,” says Sickman-Garner. “I think they came along at a really good time. They had a vision of making really great food, and making it available in Ann Arbor. There wasn’t any place that had a big selection of specialty food items. Even olive oil was hard to find then—Colavita was the best you could do and even that was rare.” 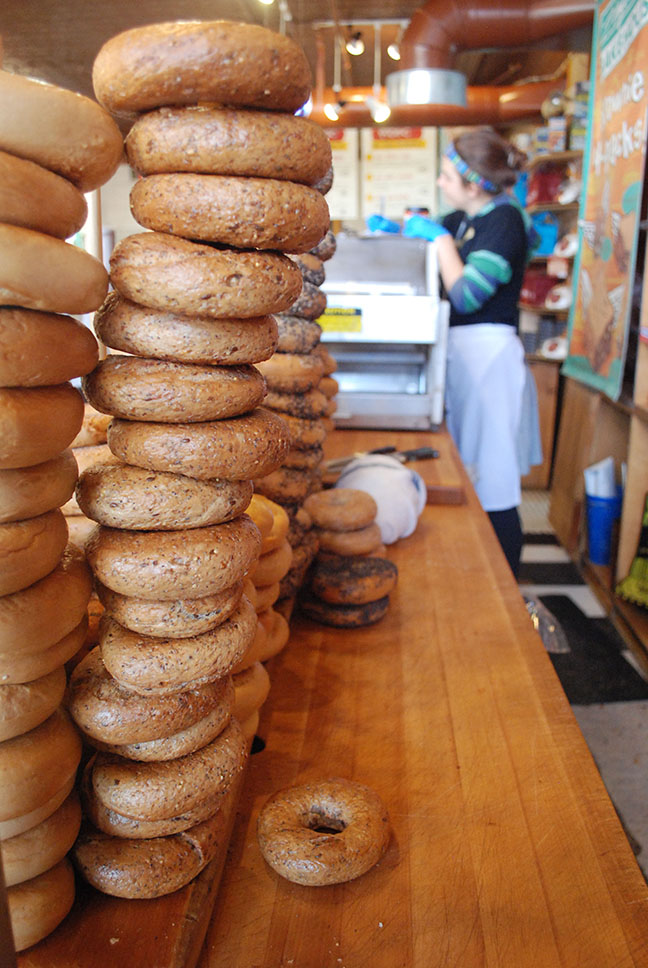 After 10 years of success and some soul searching about franchising (which they discarded as an option) they decided instead to build new businesses under the Zingerman’s name. First on the docket was a bakehouse, born out of necessity. Saginaw used to drive to Detroit each morning at 4:30 to buy the bread for the sandwiches—which wasn’t the easiest way to start a day, especially in the middle of January in Michigan. The problem was—neither of them wanted to be a baker. They approached an old friend who had back of house experience, but also an engineering degree. He agreed, apprenticed with a master baker in Saratoga Springs, came back with recipes and ideas, and opened the Bakehouse.

Then, like a set of dominoes lined up in a beautiful pattern, more businesses launched: ZingTrain, to address the many phone calls and requests they received to discuss their successful business model. Or, the mail order business that was first concepted by two Deli employees armed with a tape gun and packing peanuts, and now brings in an estimated $15 million a year.

Zingerman’s has two event spaces: one inside the city of Ann Arbor (Events on Fourth), and one about 15 minutes outside the limits, in Dexter, MI (Cornman Farms). The Deli and the Roadhouse are the exclusive caterers.

Events on Fourth, a former high-end restaurant turned cozy event space with exposed brick interior and Edison bulb lighting in the trendy Kerrytown neighborhood of Ann Arbor, normally staffs one server per 20 guests for buffet; more for plated and family-style events, at $25 per hour per server. Events range from $30 per person for dinner and non-alcoholic drinks, to $150+ for, as they say, the “whole kit n’ caboodle.” With a cadre of event planners, chef services, bartenders, rental services, florists, and other professionals at their fingertips, the reviews on Yelp are glowing. 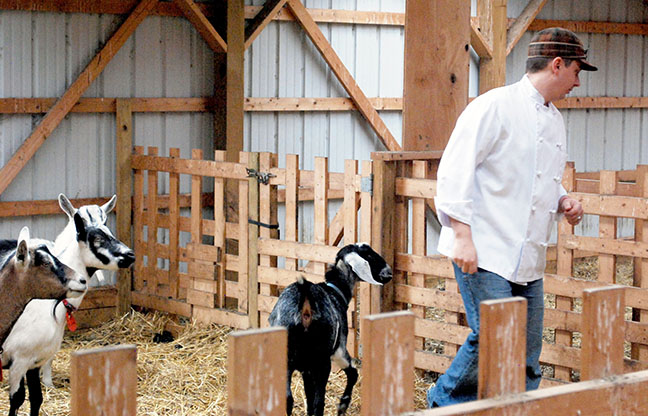 Chef Hales and some of his biggest fans on the farm; photo by Kathleen Stoehr

Over at Cornman Farms, with crisp tent pavilion, distinctive event barn, historic farmhouse, and the garden-filled grounds, the renovated farmhouse has a bright open kitchen, produce spilling out of its gardens, and goats in a separate barn. “We work exclusively with Zingerman’s caterers, so they’re here all of the time,” says Margaret Wilson, director of sales and events for Cornman Farms. “They’re in our kitchen all of the time, they use it, they know it, and it’s a really good service for them—it raises the food quality so much.”

Chef Hales agrees. “It’s probably one of the great things about the space,” he says. “Doing off-premises events—and I’ve done a lot—and to be stuck in a field and to not be able to get the extra table you really wanted or somebody drops a stack of plates…or being able to cook from fresh rather than a hot hold and serve?” Makes it so much better, he says, to have everything a caterer needs to succeed right at their fingertips.

From an event perspective, couples are encouraged to use the entire space. For example, says Hales, “one [wedding] couple did yoga on the lawn [before the ceremony]; another got here early and decorated, then brought in lawn games, then they just kind of hung with us all day [while we cooked].” 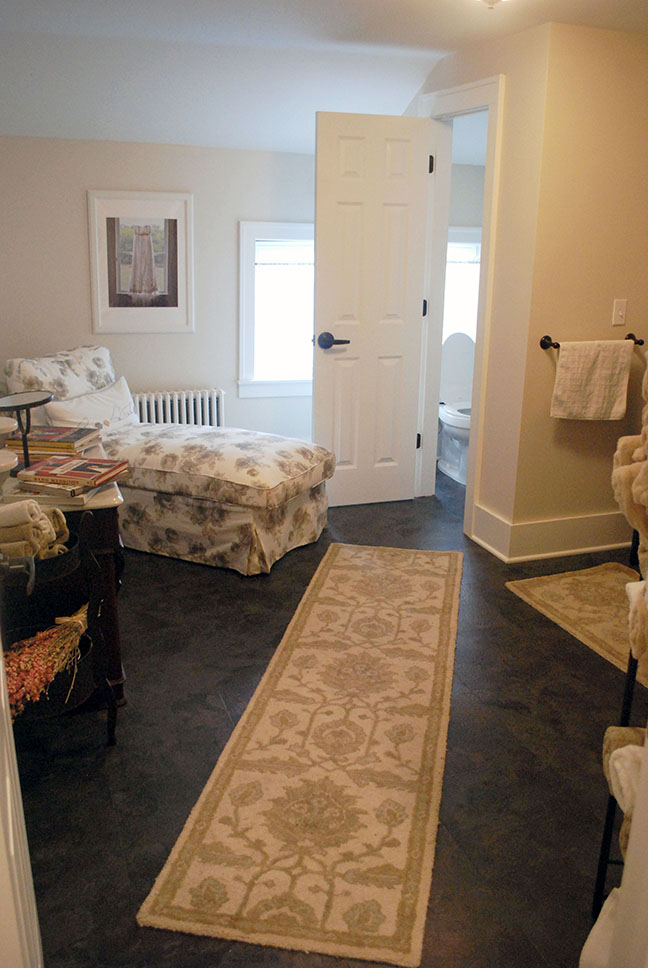 A relaxing room for the bride-to-be within the farmhouse; photo by Kathleen Stoehr

“We don’t want you to just get married in the barn and that’s it,” says Wilson. “We really want our couples to be in the whole space. What tends to happen is that people will get here early and use the house, then they’ll have the wedding outside, have dinner in the barn, have a cocktail hour in the farmhouse, and then go back and have dancing in the barn after we’ve flipped the space.”

For some events, Chef Hales will do the cooking, such as with the small “Elopement” or “Intimate wedding” packages that include a gourmet meal after the ceremony for between two and 20 people—either brunch, lunch, or dinner depending upon the time of day.

Beyond that, Chef Hales has been known to “kidnap” wedding guests on occasion and bring them out to the public gardens to talk about farming. “The kids are the easiest ones to get out there,” Hales says. “There was a kid here in July eating kale straight from the plant. He wasn’t even picking leaves—he was just leaning down like a goat and munching on the plant. That was a good day,” he chuckled. “A highlight.”

From tray sandwich delivery to a catered office event to a 50k wedding, the company has options aplenty for just about any catering request. 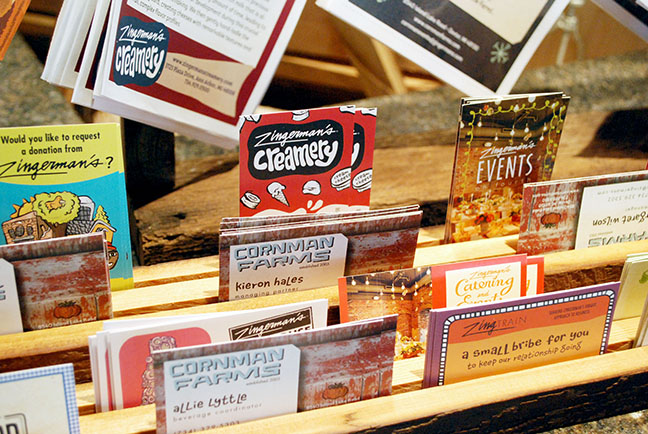 Materials about all of their business models are readily available; photo by Kathleen Stoehr

“The world is one big melting pot now,” says Chef Hales. “True, we are all getting back to local food, and more local produce—but we have people like myself, an Englishman making French classical cuisine and English cuisine because that’s what I was trained to do, and then we have someone like Ji Hye bringing South Korean fare to Ann Arbor—and that’s local now, too.”

For the Zingerman’s Community of Businesses, their 2020 Vision plan is sharply in focus.

• A great place to work

• A place to learn

• An active part of our community