Pint-sized gourmets have taken control of the traditional kids’ table. Here’s how the industry is responding to the increased demand for creative, child-centric cuisine 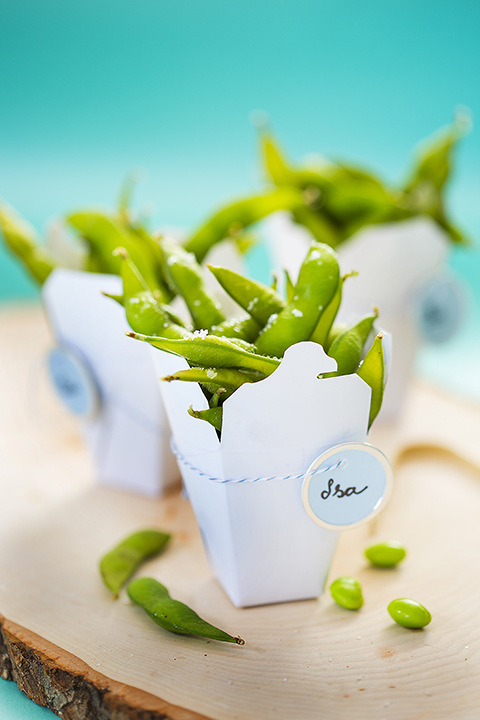 They’re charming, they’re adorable, and they’re the apples of their parents’ eyes. But no matter how marvelously winsome those little tykes are, there are a few things you must be prepared for when catering for kids. Here’s one: "If there’s a chocolate fountain, kids are inevitably going to spray chocolate everywhere. Whether it’s mischief or not, it’s a mess,” says Maari Cedar James, Director of Sales and Events at Minneapolis, MN-based Chowgirls Killer Catering.

Here’s another: “At some of those parties, if they can use it in a food fight, they will. Let me just say, we’ve learned to consider the ‘throwability factor,’ because things like sprinkles can really gain a good trajectory,” says Jeffrey Ware, Director of Operations at Catering by Michaels, Chicago. Check.

So no chocolate fountains, no sprinkles, and I’ll just add this nugget for good measure: Dippin’ Dots ice cream is really, really hard to contain.

Every caterer has a cautionary tale or two of kids gone cuckoo. But there are also plenty of success stories about the joys and significant opportunity that catering to the underage can bring. First, however, you must become an expert at piquing pint-size palates. It’s not as hard as you might think. “I’m noticing a lot more kids who have opinions about food, and who want menus with items that are fresh and healthy,” Cedar James says. “Their palates are developing a lot sooner, parents are including them in mitzvah food selection, and are even bringing them along for wedding tastings.”

Cedar James’ observations are echoed by Maeve Webster, president of Menu Matters, a consultancy focused on helping foodservice operators and food manufacturers analyze, understand, and leverage trends. “There is a big shift in the way kids are eating,” Webster says. “For younger children, traditional items such as burgers and chicken fingers remain popular, but there is significant evidence that kids also are increasingly appreciating ethic foods and savory flavors, not just fried or sweet items. Many youngsters are willing to try things that might be thought of as traditionally parents-only fare, such as Sriracha sauce or sushi. When I was a kid, there is no way I would have tried sushi, even if someone paid me in Princess Leia dolls,” she laughs.

So is the kids’ menu itself headed for obsolescence? “We have picked up on a restaurant trend in which kids as young as age seven are ordering off the adult menu, to split an entrée with a grownup or among other kids,” Webster says.

Industry benchmarking information shows that most purveyors have not honed in on this trend, however. “When you look at year-over-year top menued items for kids, they remain virtually unchanged,” Webster notes. She explained that the pace for innovative kids’ food is being set by higher-end hotel chains, who have conducted extensive research and testing, and have based their kids’ menus those findings. “Hyatt’s kids’ menu includes a number of interactive offerings, like a build-your-own-taco that comes with fixings to allow the entrée to be ‘built’ at the table,” Webster says. “It’s an activity as well as a food.” The menu also includes a Compose Your Own Bowl program that includes gluten-free pastas, brown rice, furikake, spinach, and scallions to name a few. 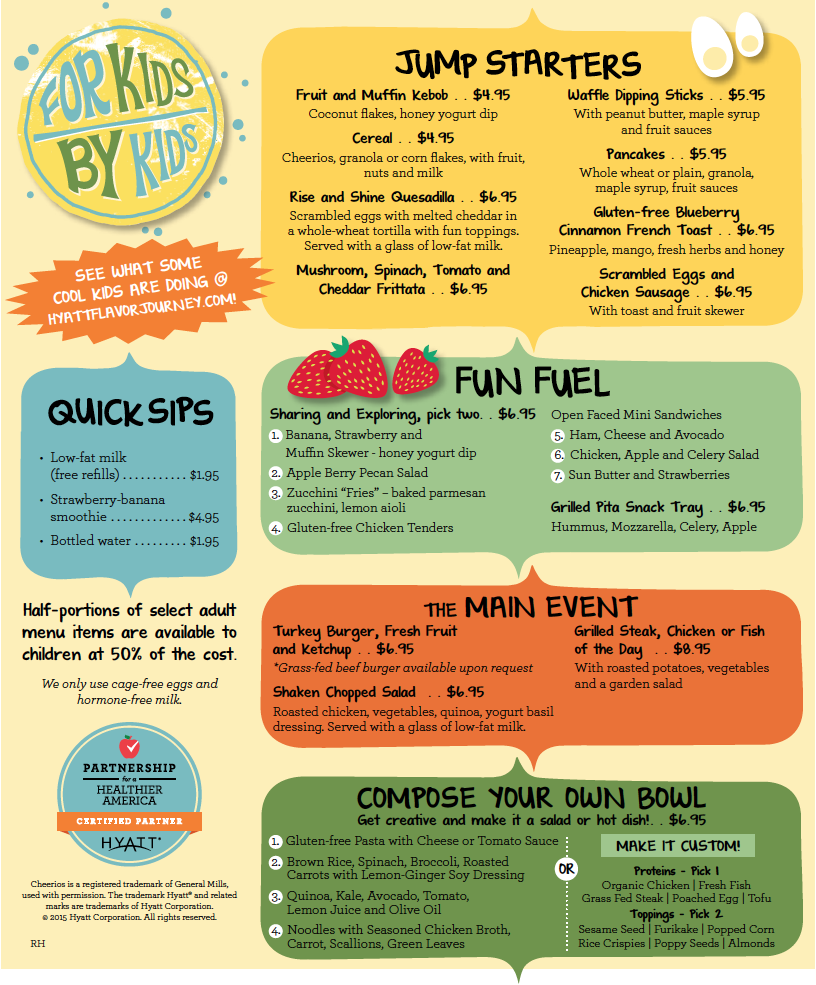 Additionally, InterContinental Hotels created a global children’s menu in conjunction with child food expert Annabel Karmel in 2014, called Global Planet Trekkers, addressing the inquisitive nature of children by exploring new flavors while also ensuring nutritional balance. At Westin properties, its Healthy Kids menu was developed by a team of “SuperChefs”™ that educate kids on the importance—and the fun—of eating smart.

“Kids are often an afterthought, but they really are a huge missed opportunity,” Webster adds. “It makes sense to include them in early planning, and to offer them as much detail as you would with adult menus,” Webster says. “Especially at the tween age, they are likely to be interested in issues such as food origins, sourcing, and ethical concerns.”

Some caterers have responded to these trends by creating separate kids-only ventures. In São Paulo, Brazil, chef Juliano Cordeiro and his partner and wife Daniela Kishimoto, owners of Zest Cozinha Criativa, have launched Zest Kids. “It’s an innovative project to serve children’s favorite dishes, but in a very healthy, educational, and really charming way,” Kishimoto says. “We do mostly kids’ birthday parties, baby showers, and baptisms, and we focus on menus that please adults and kids at the same time.” Kishimoto has also noticed an uptick in requests for health-focused fare. “We serve a lot of baked and steamed foods, but presented in a playful fashion.” 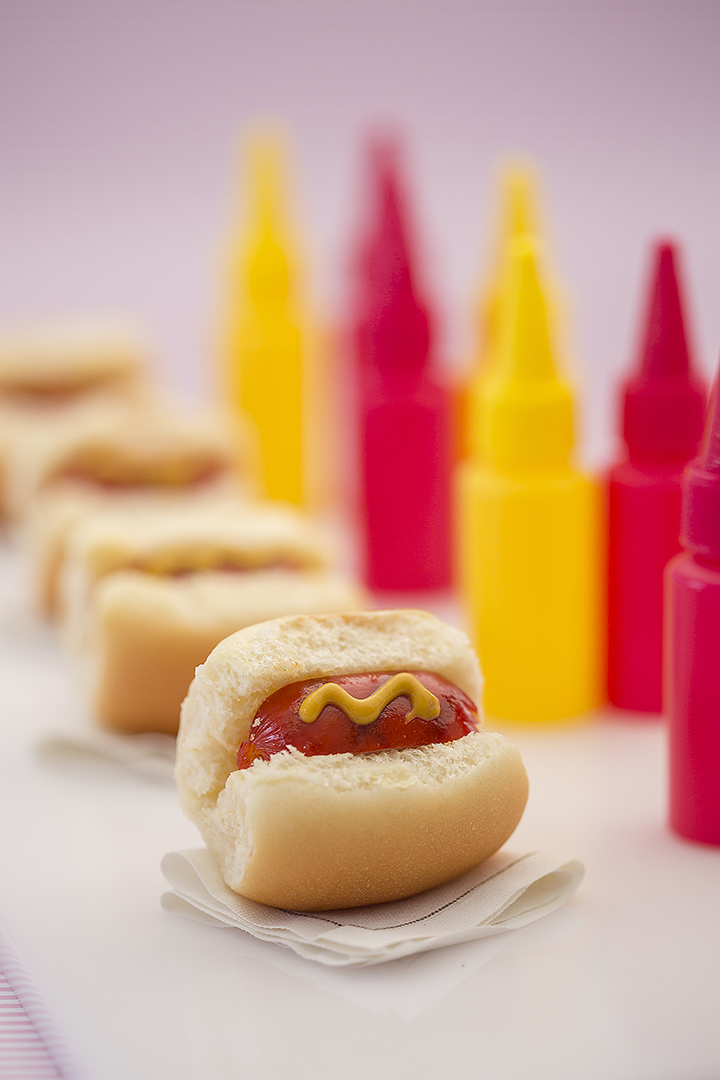 “We bring all the equipment required to have a kosher event anywhere, including a food truck with warming ovens,” says Chany Kleinberger, partner at Mi Chicas Kosher Catering & Events in Spring Valley, NY. In addition to bar and bat mitzvahs, the company also caters parties celebrating the bris, a circumcision ceremony, and the upsherin, a haircutting ceremony held when a boy is three years old. “We just did a bris with a Candyland theme, with a Candyland cake centerpiece,” Kleinberger says. 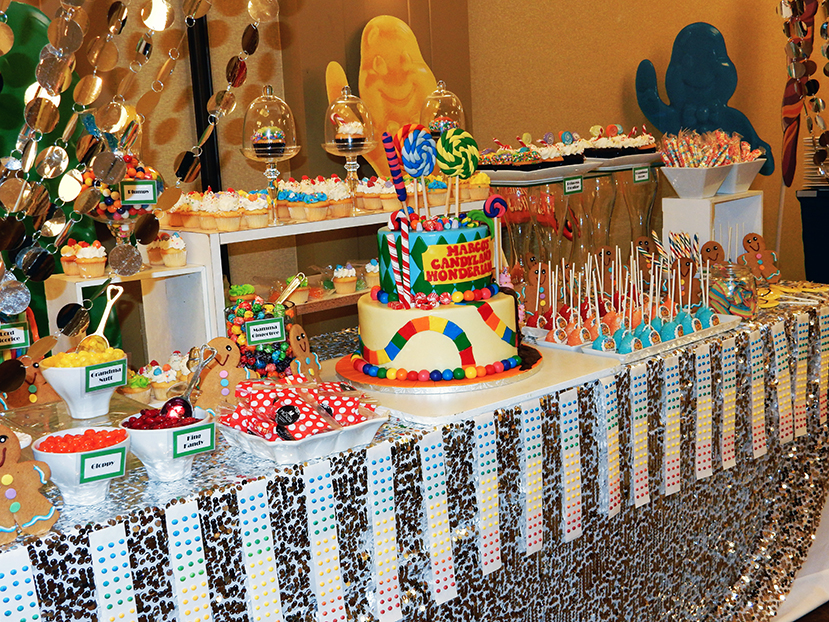 “Food stations are very popular,” Cedar James says, “especially if they reflect the interests or travel experience of the child.” At a recent bar mitzvah, the honoree especially loved salmon, so it was served as the main course. At another, the family wanted to honor their Russian heritage, so Chowgirls prepared family recipes for the crowd, including mushroom hand pies, bite-sized savory kugel, and the boy-of-honor’s favorite, which was, believe it or not—pickled beets.

“While the bar and bat mitzvah children usually have input into the menu for their event, kids attending a mostly adult event don’t usually have much say,” says Ware. “But even if we’re serving them simple things like mozzarella sticks or buttered noodles, we make them as delicious as we can, and ensure they’re cooked perfectly and seasoned properly.” Still, Ware says, he wonders if clients are not giving enough credit to younger guests’ palates. “I think a skilled chief can make a kale salad that kids would love,” he says. 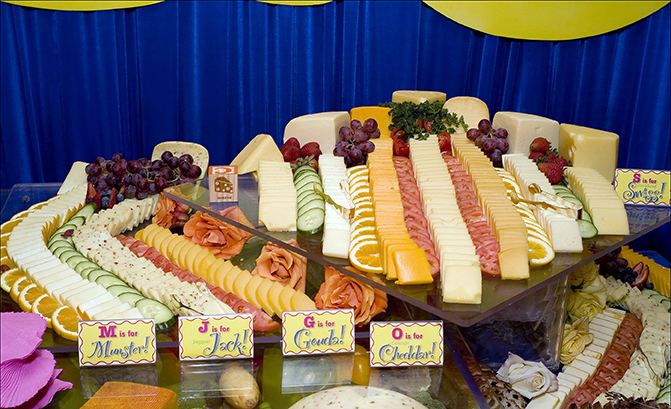 Fruits, vegetables and cheese presented playfully from Catering by Michaels

“For bar and bat mitzvahs, we usually create a fun lounge area for kids, with a more formal seating area for adults,” Kleinberger says. “For kids, it’s all about having a good time with their friends; and for parents, they want a chance to relax and let loose after the big day.” Other trends include a high degree of personalization in every aspect of the event, including the creation of a unique logo with the celebrated boy or girl’s name. “We’ve used someone who makes wax hands and another person who creates tie-dyed tee-shirts.”

As for weddings, “We’re noticing more requests for kids-only tables with coloring books, markers, and other activities for little ones, and even their own custom beverages,” Cedar James says. One thing she knows she can count on—grownups sneaking over to the kids’ buffet to grab some chicken fingers. “They can’t help themselves,” she laughs. 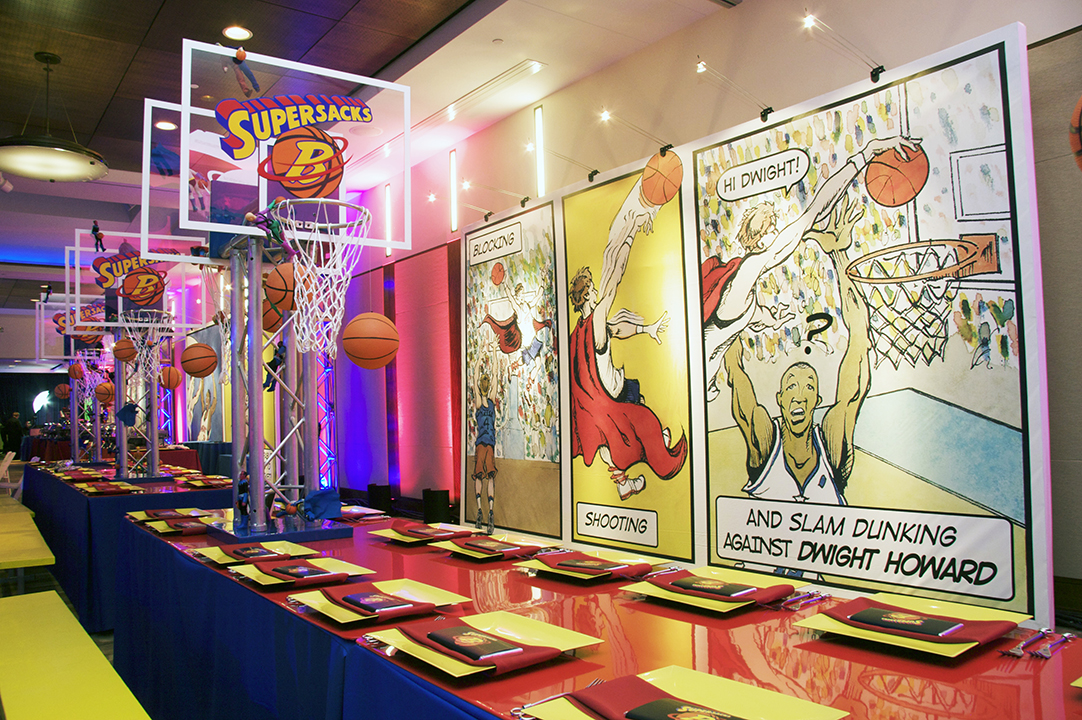 Exuberant kids add a lot of energy to an event. They can also do some serious damage. “We recommend that our clients keep elaborate centerpieces to a minimum,” Cedar James says. “Decorative elements draw attention and can incite mischief.” Even the innocuous balloon centerpiece, for example, is a kid-magnet. Pint-sized partiers have been known to sit on balloons, pop them, bat them around manically, and even suck the helium.

As a way to replace elaborate tablescapes, some event planners have reported an uptick in the use of print and graphic elements, including temporary tattoos, printed canvas gift bags, or customized napkins and cups.

Food choices can also have a big impact on how the venue looks after the last guest has left. “If you have a cotton candy machine, it will make a mess, and ditto for popcorn,” Cedar James says. “Small cupcakes and or doughnut trees are just as much fun, and do a lot less damage in terms of clean up.” And don’t forget—you have already been warned about Dippin’ Dots.

Finally, the length of the event can have an impact on restless kids, so it’s important to counsel clients regarding the party’s length. “For kids’ events, we definitely recommend keeping the timeline shorter,” Cedar James says. “Keep the focus on food, beverages, and dancing, and get everybody out of there in three hours.”

National trends include candy/sweets bars that allow guests to create their own desserts, and then also take home goodie bags full of treats. Some events include having a food truck parked outside the ceremony location to allow guests to grab a quick snack before heading into a more formal buffet, or in the venue parking lot for going-away treats when the event has concluded.

Other top menu items include:

Catering by Michaels, Chicago – DIY bars, including tacos and sushi