Caterers are oftentimes well-oiled machines when it comes to serving up a large number of meals. But even the most efficient caterer can feel the stress of serving thousands of meals. And that stress becomes even more prevalent when it’s happening on a national stage such as an awards show, sporting event or other star-studded affair. But what happens when the number of meals skyrockets to a total of 8,000 on one of the largest stages in the country, the Super Bowl? 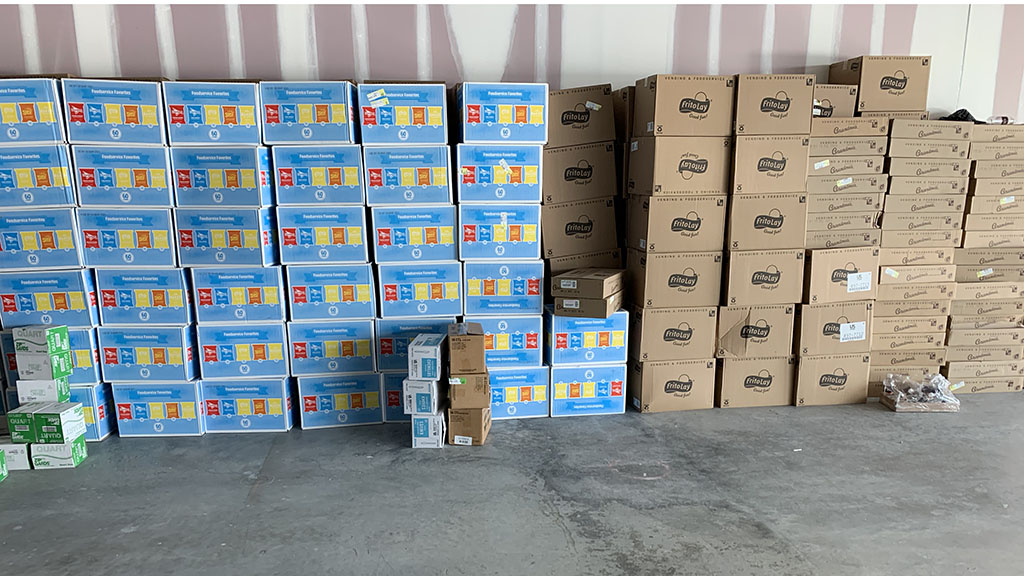 CBK Catering & Events accomplished just that in February when they produced over 8,000 boxed meals for staff during Super Bowl LV. The International Caterers Association hosted a webinar with CBK Catering & Events on March 22 where they gave a rundown of the planning, logistics and execution for the order entitled “The Good, The Bad & the Ugly: Producing 8000+ boxed lunches for Super Bowl LV.”

“I’d say a couple of years ago, if you had told us we would be able to execute that many boxed lunches in one go around for the Super Bowl,” said Chase Mayer, Director of Marketing & Business Development for CBK Catering & Events, “we probably would have said ‘I don’t believe you.’”

The road to the Super Bowl

CBK Catering & Event’s journey to the Super Bowl began about a year-and-a-half ago when they applied to participate in the NFL Business Connect Program, which is essentially a way for women and minority businesses to take part in bidding on the Super Bowl. Additionally, CBK already had a relationship with Raymond James Stadium having previously provided boxed meals during Tampa Bay Buccaneers’ games.

CBK acquired several small catering contracts for the Super Bowl, however as the pandemic continued to rage on, many of the full-service events were cancelled, while many of the caterers packed up shop.

“Long story short, plenty of full-service events were cancelled throughout the process, but we stayed the course,” Mayer said, “but we were poised and ready to move on those boxed lunches, I think it was our longstanding partnership with them that led to the bulk of the orders.” 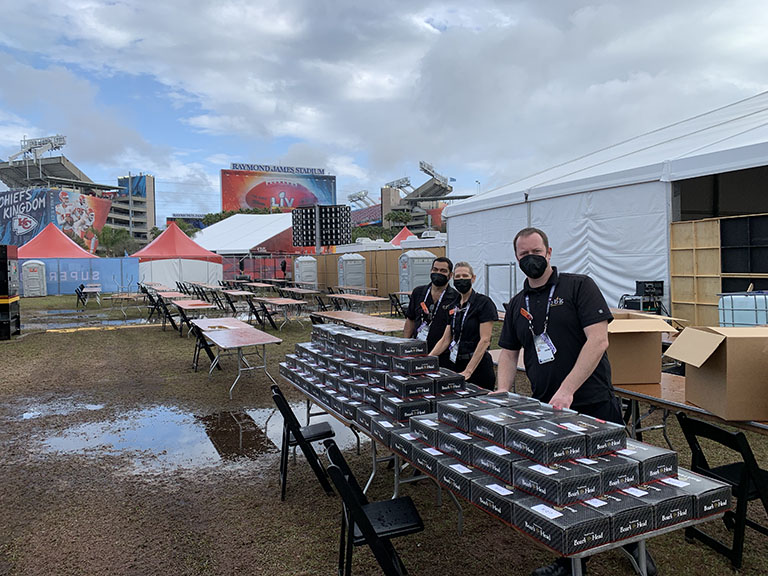 The orders that CBK were responsible for consisted primarily of boxed meals for behind-the-scenes Super Bowl staff and security. However, they also provided meals during a healthcare heroes event.

One of the first items on CBK’s to-do list for the Super Bowl order was to find a location where they would have enough space to prepare the meals. Eventually they turned to one of their venue partners to utilize an unfinished floor remodel where they could set up tables, store the pallets of nonperishable items and perform the assembly and packing.

When it came to ordering and logistics planning, CBK relied on the system they had already put in place for the Tampa Bay Buccaneers’ games, only this time they were planning for 8,000 meals rather than 1,000.

“Even though we thought we had a system down with all of our spreadsheets and organization for when we did a thousand lunches,” Mayer said, “but if you scale that up to 8,000 lunches it changes the game a bit.” 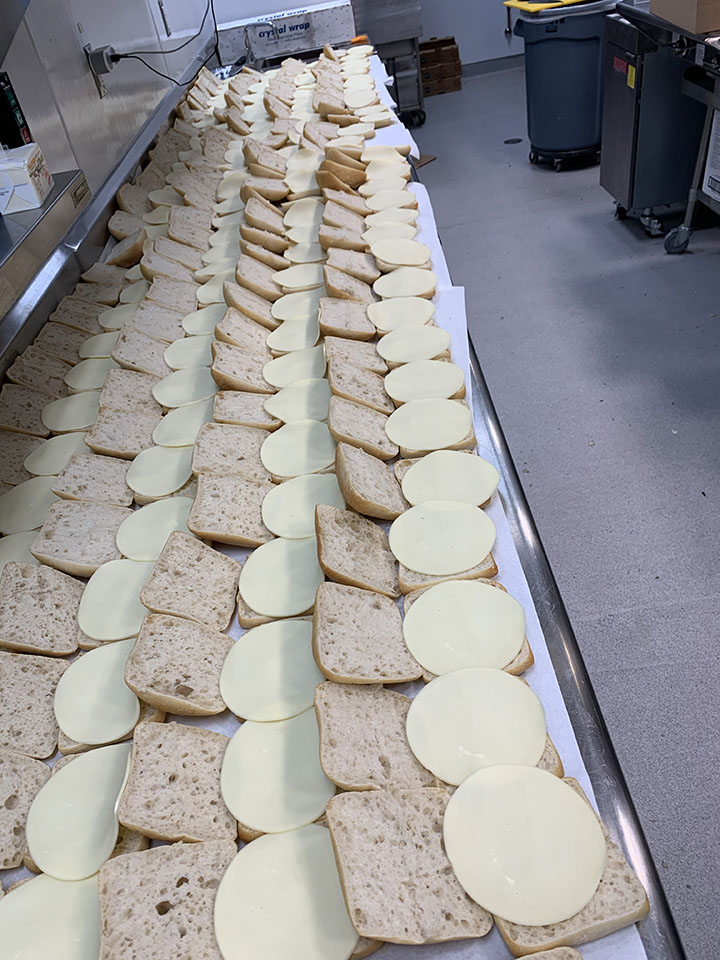 The boxed lunches prepared by CBK Catering & Events included a variety of wraps and sandwiches made with Boar's Head meats and cheeses. Photo courtesy Chase Mayer.

In addition to making sure that the right quantities of each item were ordered, CBK also had to think about the number of people they were going to need to help with the meals, and this proved to be quite challenging since the number of orders were constantly changing as was the likelihood of the Super Bowl actually happening.

“We created a little math formula for ourselves and multiplied how many hands we were going to need, but we realized pretty quickly that orders were constantly changing,” said Gina Rausch, Director of Operations for CBK.

Once it came time to assemble and package the meals, the CBK culinary team took the reins to ensure everything went off without a hitch.

“We did get the job done though,” said CBK Executive Chef Mohammed Hassan. 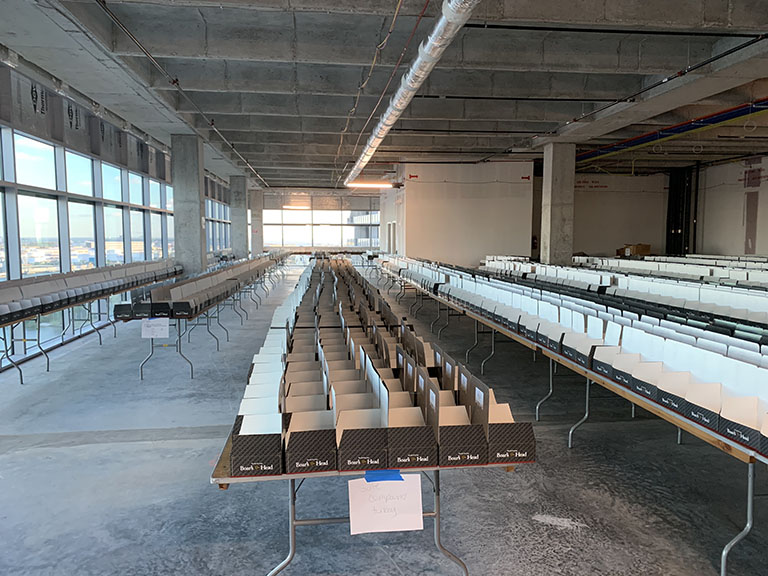 CBK Catering & Events set up a sort of assembly line for preparation and packaging of the meals. Photo courtesy Chase Mayer.

The assembly and packaging of the boxed meals obviously needed the most care and attention because based on the group that was receiving a meal, different items had to be included in each box, which in turn required very detailed labeling.

“Some had side salads, some had cookies, some had Mars bars,” Mayer said. “It wasn’t just a matter of filling 8,000 boxes, we had to be really methodical because if we're just putting food into boxes without thinking about it, the ripple effect can be huge.”

And on top of that, each box had to be packed and presented in a specific way.

“I’m pretty picky with these boxed lunches,” said Kathy Mayer, President of CBK. “Everything had a time and space to go into the box, and whoever gets the boxed lunch, they’re getting the same product.” 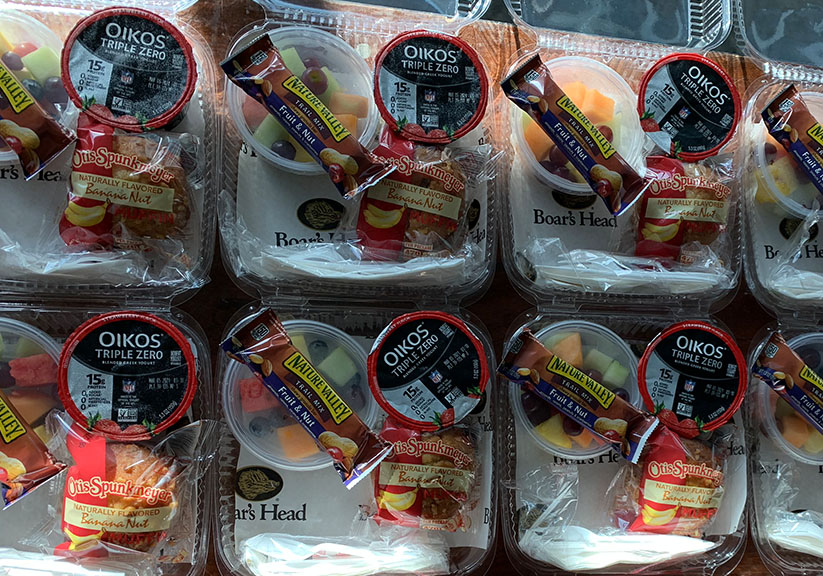 A few unforeseen challenges that CBK encountered during the whole process included not having enough refrigerator space for the finished boxes, and even excess garbage and time from opening bulk candy boxes.

“It’s all these little details that you wouldn’t think twice about normally can have a pretty big domino effect later in the week,” Chase Mayer said.

The final step in the process for CBK was delivery of the boxes to Raymond James Stadium. After having already received security credentials and training, the team on-site had to also go through Homeland Security checkpoints before having police escorts take them to their final delivery destination.

“We really had to be organized from the beginning,” Chase Mayer said. “And I think we learned a lot from start to finish.”