We have a man named Guy to thank for the glorious concept of brunch—and no, it’s not Guy Fieri. Guy Beringer, a writer from England, first introduced the world to brunch in 1895 in his Hunter’s Weekly essay titled, “Brunch: A Plea.” In it, Beringer advocated for “Saturday-night carousers,” stating that those who indulged in typical Saturday night shenanigans should be able to enjoy a light Sunday meal around 11:00 a.m. to socialize, share stories of the night before, and nurse hangovers with a little hair-of-the-dog.

And for this, we thank him. Many believed that this idea of consolidating breakfast and lunch would simply be a fad that would eventually dissipate. However, brunchers persisted and, after 30 years, the meal moved its way to the United States, where it has made a lasting impression and has evolved throughout time.

Dana Carroll, CPCE, Director of Catering for Wolfgang Puck Catering in Dallas, and Lisa Hopkins, CPCE, CMP, Catering Director at the Houstonian Hotel in Houston, have both provided insight on what brunch trends are looking like for 2016.

“It’s well known that ‘Dallas-ites’ love their brunch and we definitely don’t see this trend slowing down anytime soon,” said Carroll. “Not only does brunch include your laid-back, boozy Sunday afternoon, it has also extended itself into high-end weddings and corporate events as well.”

The two main criteria for a successful brunch, food and alcohol, sound pretty straightforward. However, there are many variations and innovations for each that make brunch what it is today.

In terms of brunch, many hungry eaters expect more than the traditional scrambled eggs and pancakes.

According to Dana, certain late-night snacks and comfort foods have been taken for a spin during the brunch hours, many in the form of unique, small plates. Some popular examples include honey butter chicken biscuits, chicken and waffles, and breakfast tacos.

Dana described one of Wolfgang Puck’s special twists on traditional entrees, the mini “Croque Monsieur.” The slider-like alternative to the classic baked ham and cheese sandwich is comprised of creamy Gruyere cheese, baked ham, Parmesan fondue and topped with a quail egg. 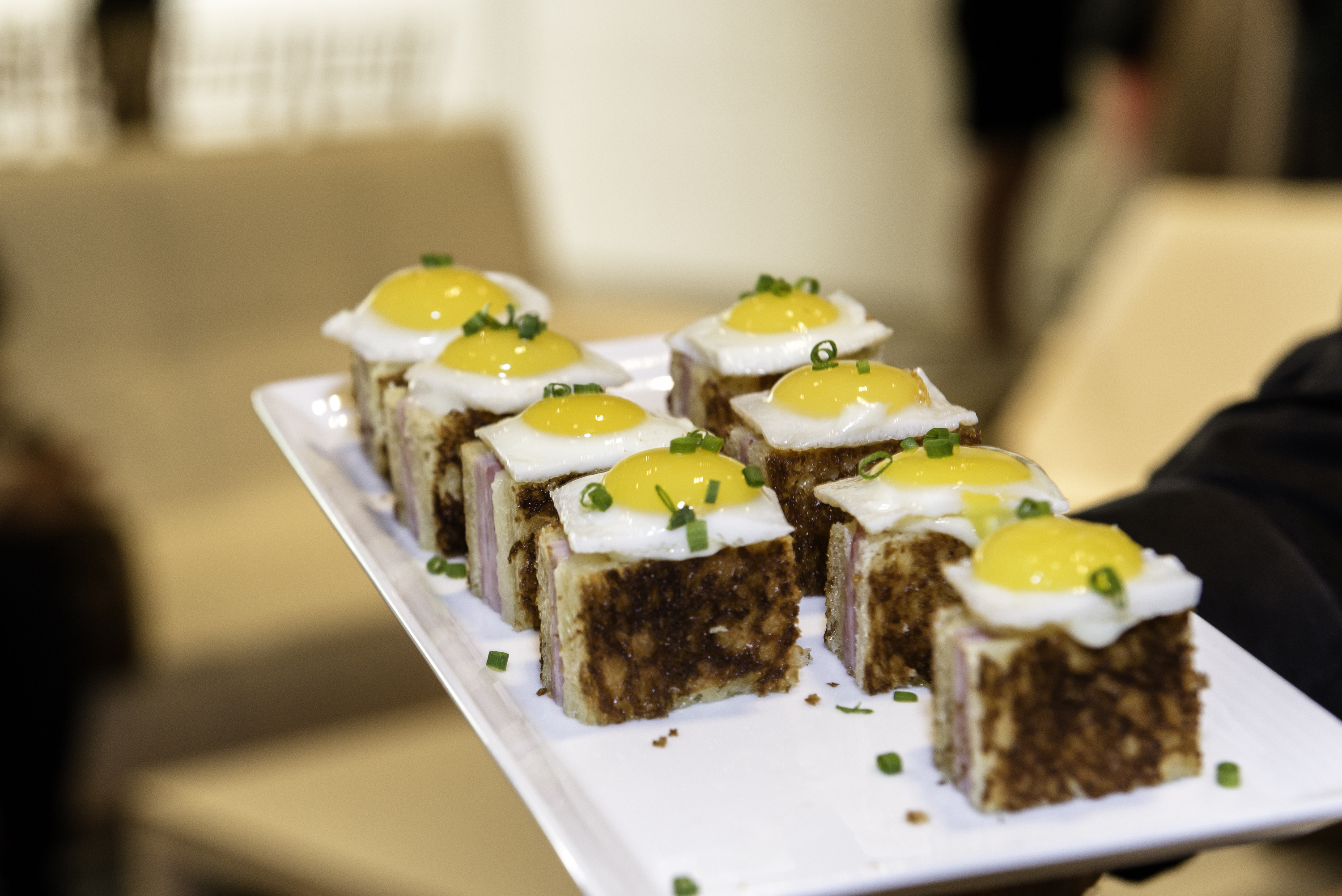 “We also have do some small plate presentations as part of our global interactive food stations,” offered Lisa. “It allows for some culinary creativity and is great eye candy for our guests. They’re always a big hit!”

Lisa described the many global interactive stations that can be offered for brunch. For example, a vegetarian pad Thai station is perfect for Asian food lovers, offering mix-ins like snow peas, sweet peppers, bean sprouts and sweet tamarind sauce. Another food station that has impressed guests of the Houstonian is a Spanish-inspired station, offering a banana leaf baked suckling pig accompanied with tostada, chorizo bean and queso fresco.

Desserts are also a center point of brunch. While traditional style dessert options are always a hit amongst diners, a Viennese selection will surely impress those with a sweet tooth. These types of desserts include small truffles, macaroons, specialty cookies, gelato and crepes Suzette.

While classic mimosas and Bloody Mary’s remain staples in traditional brunch options, there are many ways in which restaurants and caterers are revamping them for modern day.

“We do seasonal mimosas in addition to a classic selection with orange juice,” explained Lisa. “For example, last year for Mother’s Day we did mango, peach, strawberry and coconut pineapple mimosas.  This Thanksgiving we will do apple cinnamon cider and orange pomegranate. They are huge crowd pleasers – some guests will try them all!”

Bloody Mary add-ins can include anything from blue cheese, hot sauce, Sriracha or bacon.