The ‘summer’ catering and event season starts with graduation and commencement by mid-May, be it a single grad family celebration or an on-campus gathering for hundreds or thousands, celebrating an entire student body. The summer season then moves out into the field when companies by the hundreds treat their employees to grilled fare, games, and team-building exercises. Scattered in between are weddings and public events both large and small. Will the weather hold? Will there be enough staff? How about some new and trendy recipes for your next event? Let’s explore. 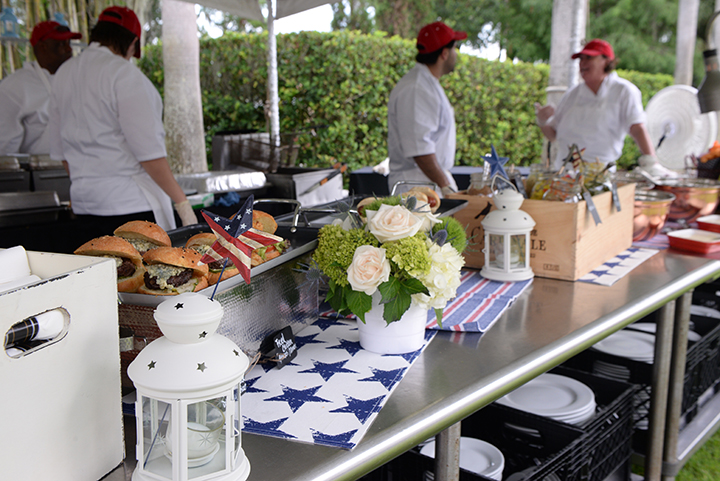 “For the 60 events we did last week,” said Ken Barrett-Sweet, BG Events & Catering, Boston, MA, “25 of them were outside. Luckily, none were rained out (and we have had 18 days of rain!).” The company is contracted for about 30 to 50 commencement events within and around the metro Boston area each year, including Harvard University, Cambridge College, and MIT, to name a few. “From mid-May until mid-June, our operation is inundated with these events (and interspersed with weddings, too),” said Barrett-Sweet.

According to Heather Thompson of Dinova (a proprietary marketplace that connects expense account diners with restaurants), corporate picnics are very much in vogue and represent a considerable corporate expenditure. Conducting a survey of its partner corporations about company picnics and food choices, Dinova found that 73% of survey respondents have a company picnic each year; and of those, 43% said their company spends annually $50,000 or more on the event; 50% have over 500 employees that attend. Additionally, “88% of respondents said their picnic takes place on company property, which helps alleviate expense on a venue that can then be spent in other areas, like food,” said Thompson.

"We will cater 150 events in the next 3 months that are strictly Picnic People events," says CEO Lisa Richards of San Diego, CA's Picnic People. "This is up from last year by 4%. The economy seems better. The issue remains that the planning [of these picnics] is last minute." Meaning—be prepared because your clients certainly are not.

In the case of Mintahoe Catering & Events, Minneapolis, MN the company was hired beyond the regular employee appreciation picnic, and asked to transform an industrial corporate headquarters into a glamorous event space for 200 guests (executives and shareholders) during the 2016 Ryder Cup Golf Tournament. To note: “Most company [headquarters] are not exactly conducive to full service catering,” said Angela Dusold, marketing director for Mintahoe. Thus, “‘Kitchens’ were set up in three of the meeting rooms; deep fryers were located outside.” 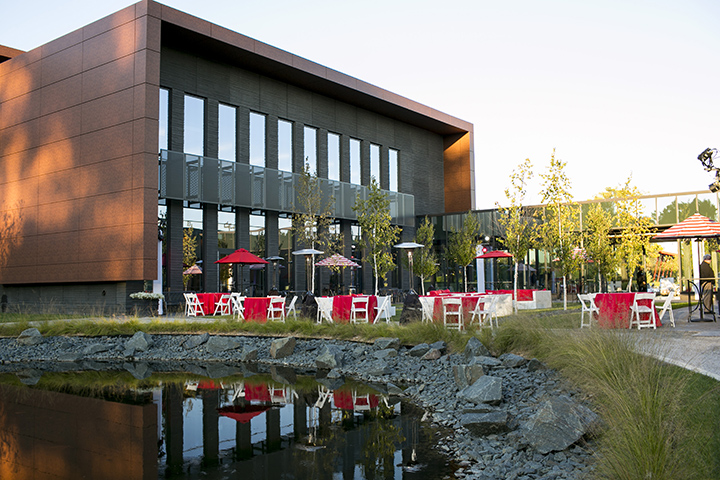 An exterior shot of part of the outdoor set up for Mintahoe's Ryder Cup event; Photo courtesy Mintahoe Catering 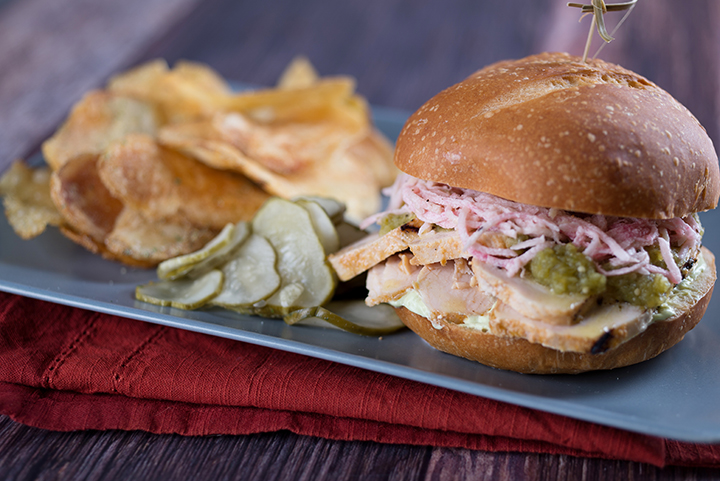 Then there is that staffing issue…

“Staffing has been a tremendous hurdle over the past few months as catering seasons come and go,” said Barrett-Sweet. “Boston’s financial statistics prove that the job market is ripe for those seeking jobs and quite poor for the employer [hoping to fill them].” Barrett-Sweet explained that the Massachusetts job market is overfilled with restaurant and food service jobs within the 16,000 eating and drinking establishments, with an 8% growth slated for the coming year. “One can imagine how difficult it is to hire seasonal servers and culinarians when the job market always has available positions for them. We have turned away business [this year] because we cannot acquire enough staff to appropriately fulfill the event’s requirements.” 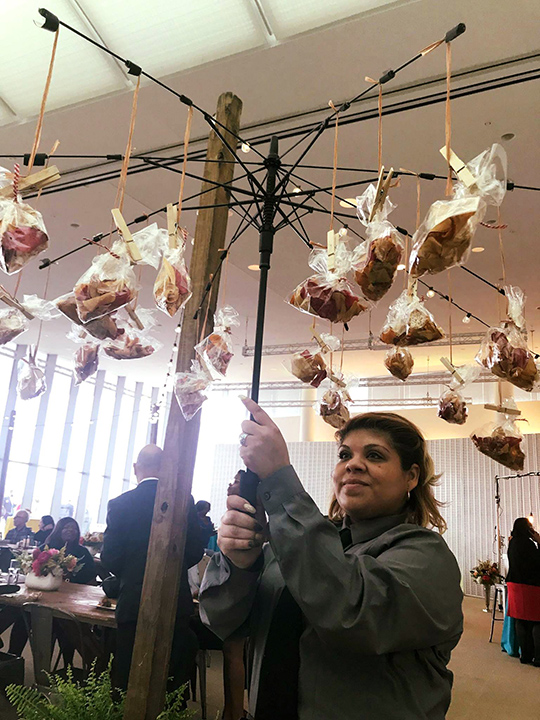 But staffing issues are not just relegated to the East coast. In Minnesota, Mintahoe experienced issues with event staffing for their above-mentioned Ryder Cup event as well. “The event took place on a Thursday in September after many of our seasonals and event captains returned to college,” said Dusold. “The unique nature (and high price tag) associated with this event required almost all of our full-time team on-site in different capacities. Our wonderful sales team could be found butler-passing hors d'oeuvres, managing catering stations, and greeting guests as they arrived!” 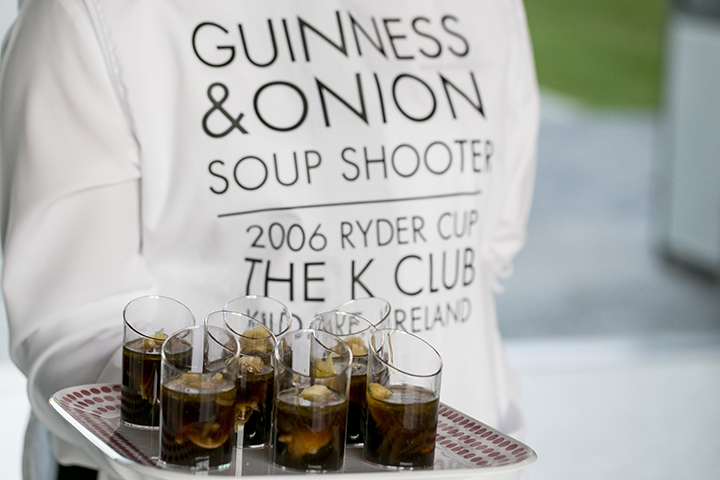 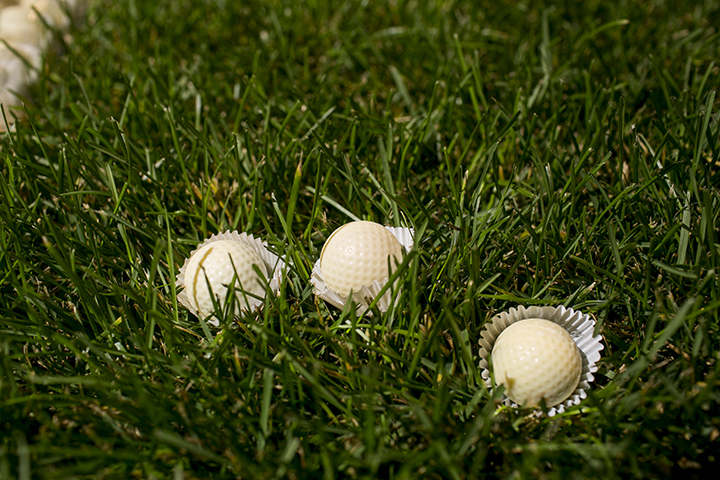 What better way to make use of an outdoor space…and a golf theme, than with truffles shaped like golf balls? Fore! Photo courtesy Mintahoe Catering

When one thinks about summer gatherings involving food, the mind inevitably turns toward the grill. “Among food options for the company picnic,” says Thompson, “38% of respondents indicated that hamburgers and hot dogs are the food of choice, and 25% indicated that BBQ took top billing.” But while traditional foods are important options for corporations, vegetarian, plant-based, and gluten-free dining is becoming more mainstreamed. BG Events’ Graduation 2017 menu lists a host of options beyond the traditional, with grains such as quinoa, farro, and rice, fresh salads, and intriguing pastas, as well as chilled or grilled salmon for pescatarians. 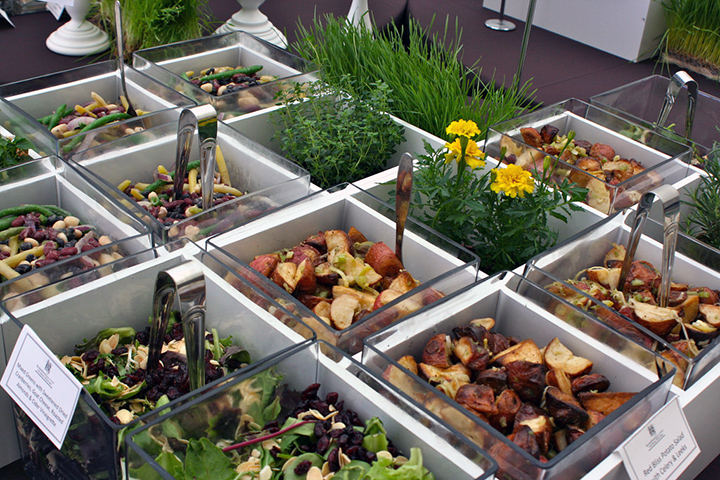 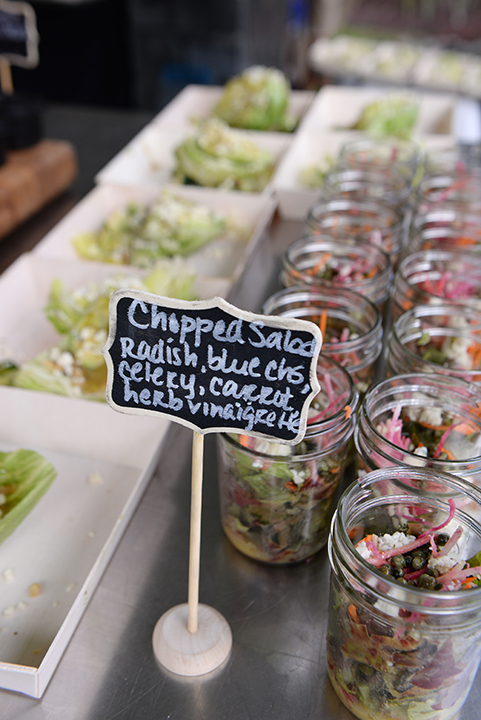 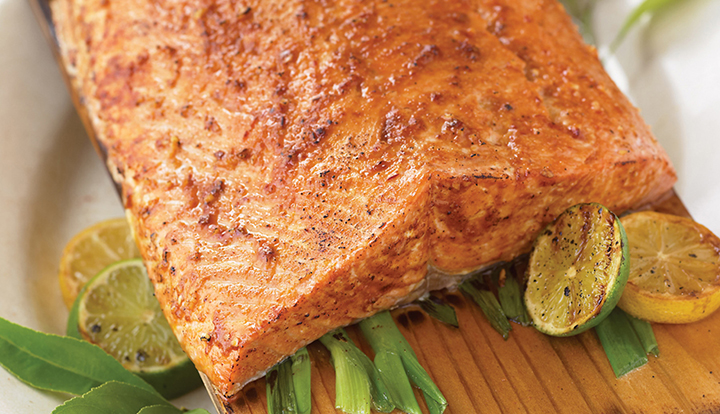 The celebrated wild Alaska summer salmon season began on May 18 with a harvest forecasted at more than 204 million salmon within the five species (Sockeye, King, Pink, Keta, and Coho). Coho, shown planked with an Asian glaze, is considered the best salmon for grilling. Click here for the recipe.

Yet the grill is still the main attention grabber for most picnickers. Lisa Richards' Picnic People has been bringing people together for over 30 years with custom picnic catering and planning, office parties, BBQ catering, company picnics and more. The company website lists a variety of traditional hamburger and hotdog picnicking options, but also offers unusual barbecuing techniques such as a Hawaiian BBQ with pork roasted in banana leaves, served shredded in traditional Hawaiian style, as well as “Picnic Stations” encompassing wings, sliders, and BBQ pork parfaits. With an average sunny and partly sunny day count hitting at about 72% of the year in Southern Cali, outdoor events are booming. "Company picnics remain the #1 corporate event nationwide," Richards said. Too, "employee moral increases when their families can participate in company events."

So many ways to grill, so little time. What’s the best way to achieve ideal results when placing a fine slice of meat onto a hot grill?

“A sear on your steak or other protein is one of the most important steps in grilling,” said chef Randal Jacobs of Blue Plate Catering, Chicago, IL. “The initial sear to your steak locks in the juices, keeping it moist and flavorful throughout the cooking and resting process.” He also notes that while the steak is getting its sear, it is important to keep the top of the grill open. “Putting the grill top down will start the internal cooking process quicker and that’s not what we want to do at this stage,” he says. 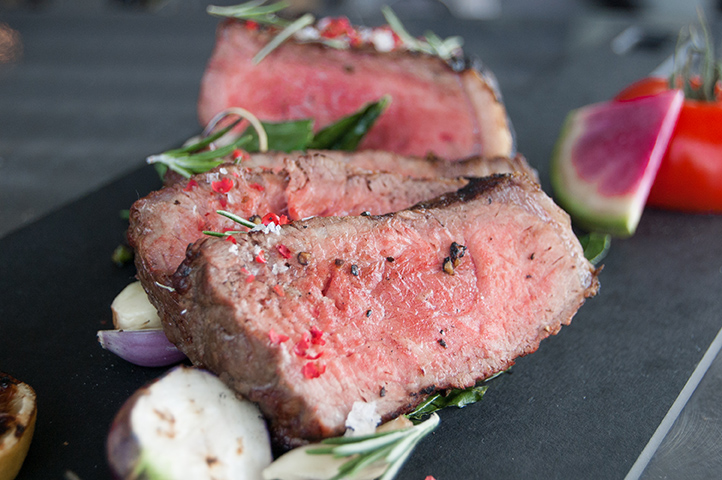 After your grill has been on high heat for 30 minutes, says Jacobs, lift up the top and look for the white, ashy grates. This is where the grill is the hottest and where all your proteins should be placed to create the initial sear. 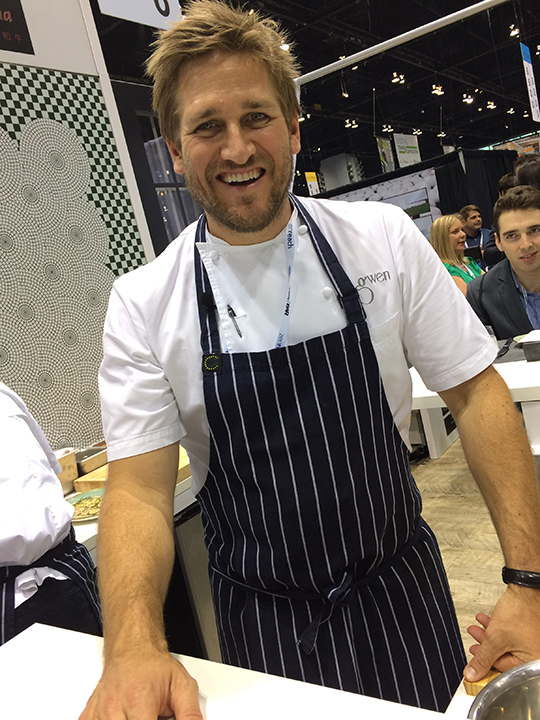 He also advocates for a technique of grilling and resting. Watch the embedded video below for his tips.

Inspiration for your next gathering

Enjoy the next few pages, as we scroll through a few recipes and tips (including a sauce and bourbon pairing), great for your next event. 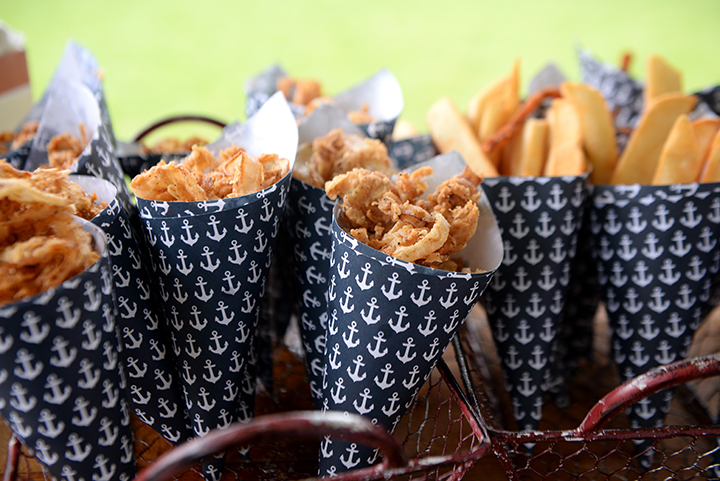