From Beer to Bourbon

Originally from London, England (and now based in Austin, Texas) you may say Sean O’Neill (Crafter’s Cocktails) knows his way around cocktails. 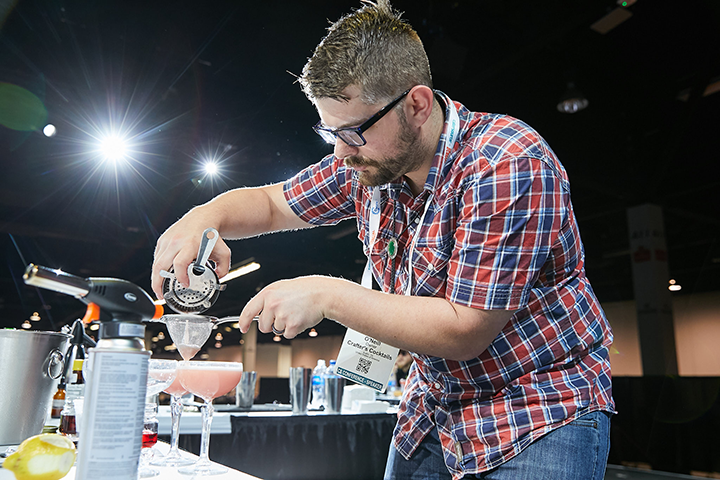 With over 17 years of experience, Sean O’Neill has become a craft cocktail visionary. He and his wife own and operate Crafter’s Cocktails, a business that now serves the greater Austin area and continues to grow. He has already made over 150 different cocktail mixers and is constantly experimenting with new flavor combinations. The company has since transitioned into events, with the goal of opening a mobile bar. Photo courtesy WASIO Photography

With over 17 years of experience, O’Neill has become a craft cocktail visionary. You could see the true evidence of that statement during the annual Swizzle Competition when O’Neill emerged victorious (fresh on the heels of his 2020 appearance) as this year’s champion.

“I felt like I had some unfinished business after my first Swizzle,” he said, “and have really grown as a mixologist in the last couple of years.” 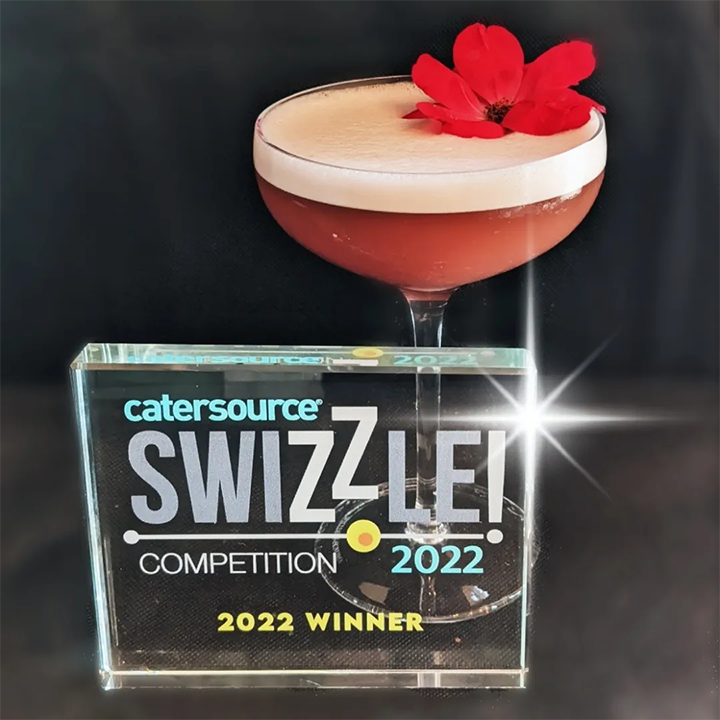 O’Neill and his fellow competitors (Nettie Frank, Cindy Cafferty, and Freddie Viren) were challenged to concoct three distinct cocktails: a temperance drink, a gin-based cocktail, and lastly a bourbon drink.

Justin Pasha with The Cup Bearer served as host and master of ceremonies, while three of his flair bartenders sat behind the judge’s table. They commended O’Neill for his creativity, his balance of flavors, and how he could combine elements.

“I believe each drink was made with a purpose and each brought you to a place in your mind where they were supposed to be enjoyed,” O’Neill said.

O’Neill began bartending in and around Atlantic City where he developed his flair for mixology.

“I love creating an experience and opening people up to drinks they have never had before.”

After moving to Austin in 2016, he expanded his knowledge to the world of craft beer.

“I love figuring out their flavor preferences and then introducing them to a world of flavors they didn’t know they could find in a beer,” he said. “I can take away a bit of the intimidation and snobbery that some people associate with craft beer and help them learn what to look for when they find themselves in that scene. I like people to feel comfortable, but also go outside their comfort zone and hopefully open up that world of flavors for them.”

Despite his foray into the craft beer world, O’Neill’s passion has always remained in craft cocktails.

“Every ingredient is important; from the liquor you choose to the ice in your glass,” he said. “Even the highest quality liquor can be spoiled if you are not using fresh ingredients. Fresh squeezed juices, homemade syrups, and clear ice are just a few important things to think about when building a cocktail.”

Shortly after competing in the 2020 Catersource Swizzle Competition, O’Neill (and his wife) began creating cocktail mixers and delivering them to his neighbors so that they could make their own cocktails while stuck at home (in the midst of a pandemic).

“As many of my hospitality brethren know, the first few weeks of the pandemic were quite terrifying, not only with a deadly disease spreading around the world, but also not knowing where your next paycheck was coming from, especially with the extreme struggles to get through to unemployment offices,” he said. “By creating craft cocktail mixers for my neighbors and friends I was able to spread a little joy. We wanted to give people something to look forward to.” 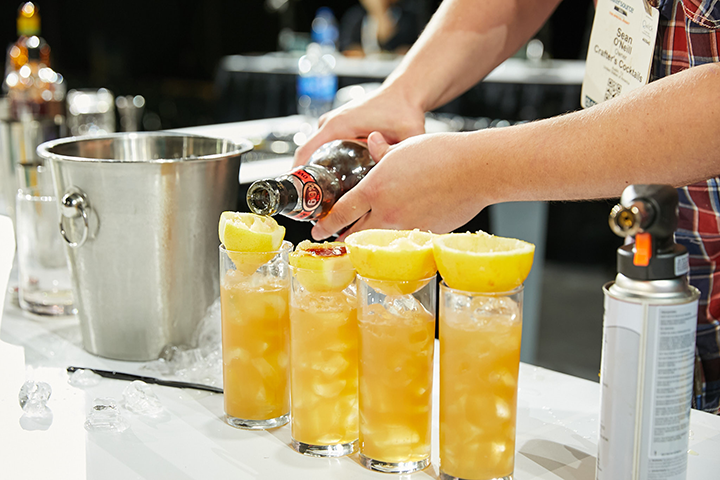 Eventually, the local community got behind the couple and helped spread the word and it quickly turned into Crafter’s Cocktails, a business that now serves the greater Austin area and continues to grow. He has already made over 150 different cocktail mixers and is constantly experimenting with new flavor combinations.

“It has been a ton of fun and honestly a great distraction from falling down a rabbit hole of anxiety during the early days of the pandemic,” he said. “Bringing happiness to people and creating something from nothing was a pure joy.

“We love to pick up fruit from a local produce wholesaler, create fresh syrups, squeeze all our own juices, grow our own herbs, and experiment with new flavors every week.”

A splash of creativity

Now, as more bars have opened and most everyone has gone back to working pre-pandemic jobs, Crafter’s Cocktails has transitioned into focusing on providing mixers for events. In addition to an extensive menu to choose from, Crafter’s Cocktails can also create something new based on the clients’ tastes and theme of their event.

O’Neill’s newest venture is designing an aesthetically-pleasing and highly-functional mobile bar for wedding and corporate events alike. Eventually, O’Neill would love to open his own brick-and-mortar cocktail bar. 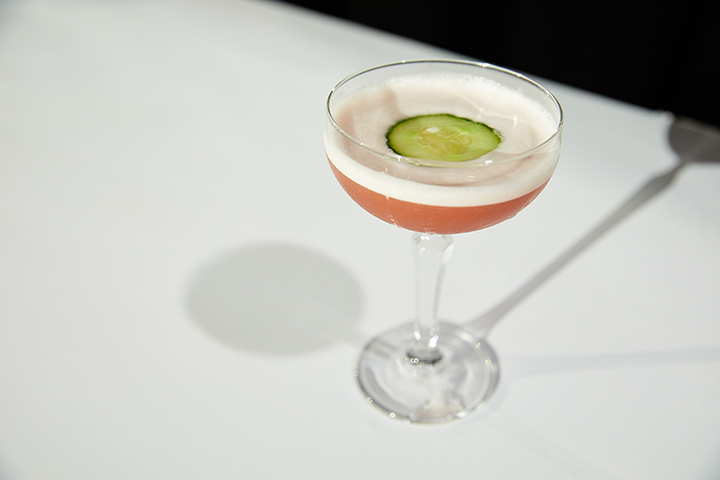 For the gin cocktail round, O’Neill wanted to take inspiration from the past and create something totally new. He drew on flavors he enjoyed during a road trip in Europe, while combining them with his love for both Negronis and Bee’s Knees cocktails.

“Sean is making magic,” Pasha said during the Swizzle Competition’s gin round. “The question is, do they taste as good as they look because they look really good.” 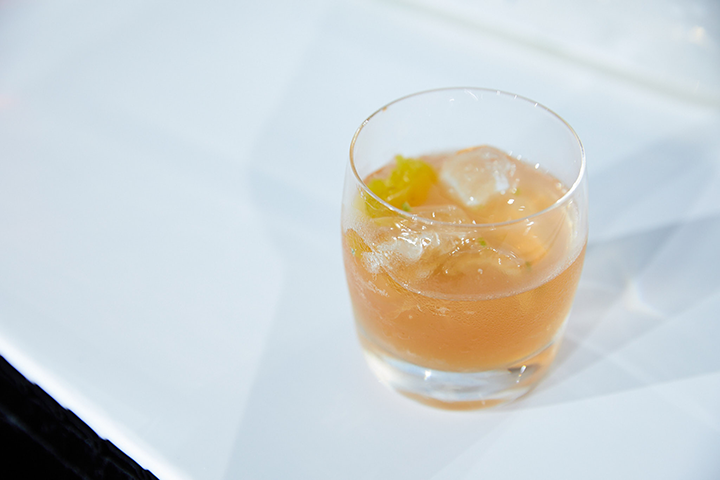 For the temperance cocktail, O’Neill wanted it to be something even the most particular cocktail aficionado would enjoy.

“That's definitely not a silly drink,” Pasha said. “It's a hard thing to make a mocktail that feels craft.” 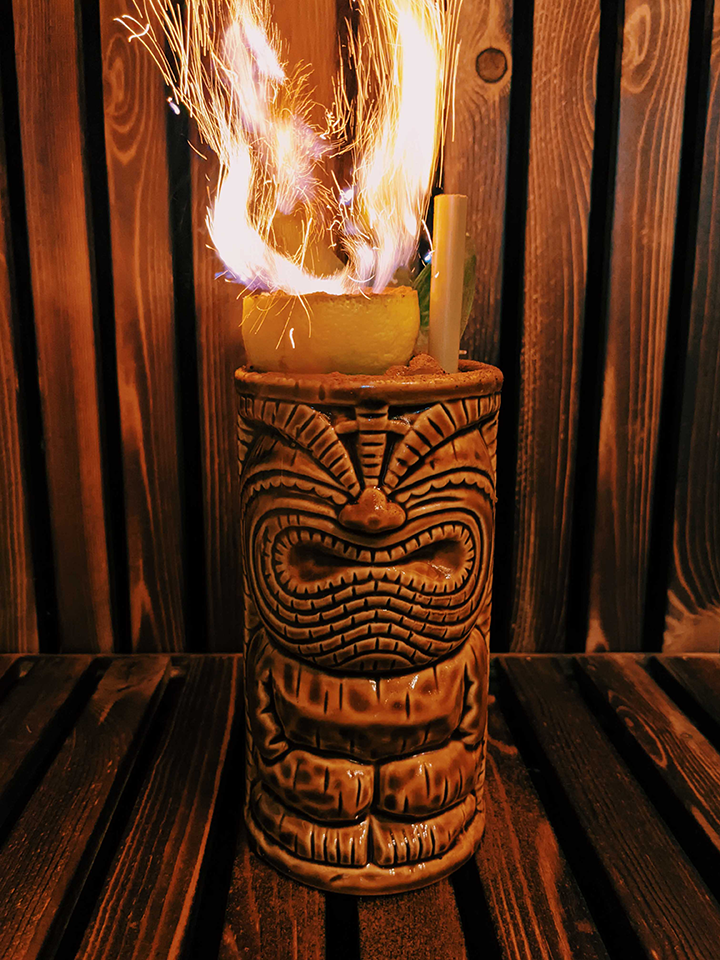 For the bourbon cocktail, Sean O’Neill wanted to do something unexpected. He has a friend who loves the tiki bar scene but is a bourbon drinker through and through. This cocktail offered surprise by setting the over-proofed rum on fire inside the husk of a lemon.

“That’s vibes, that’s experience right there,” emcee Justin Pasha said. “You got fancy on us again with this round.”