Los Angeles is certainly flying high at the moment. Not only did the Los Angeles Rams come out on top during Super Bowl 56 against the Cincinatti Bengals, but as the game’s host city, it was an opportunity to showcase Los Angeles’ new SoFi Stadium. It’s no surprise that the team and the city pulled out all the stops when it came to celebrating. 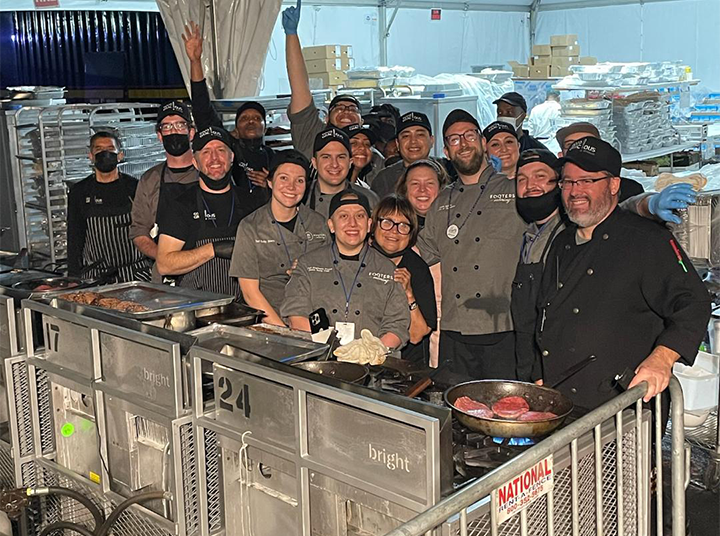 Good Gracious! Events (click here for more on the mother/daughter team of Pauline Parry and Joanne Purnell), a Los Angeles catering and event firm, was tasked with handling orders for upwards of 5,000 people after being hired by SLAY Events, the event producer that the Rams organization contracted with for their Super Bowl events.

An All-Star Session.  Don’t miss your chance to get an insider’s peek at Los Angeles’ new Sofi Stadium during Catersource + The Special Event by attending Monique Boyd’s session New Building with High Expectations - On Premise Catering at SoFi Stadium, which is being offered on Tuesday, May 3 at 4:00 p.m. During the session Boyd will share best practices and insights from this amazing experience and how this can be applied to your business.

“Being in Los Angeles and not getting some of the Super Bowl fun would have been disappointing to us,” said Pauline Parry, owner of Good Gracious! Events.

Undertaking such a large order required Parry to call in reinforcements from across the country.  Ten catering professionals from the culinary teams of Footer’s Catering in Denver and Blue Ridge Catering in Virginia boarded planes to lend a helping hand throughout the week leading up to the big game.

“We’ve catered events with SLAY and the Rams in every part of the city,” Parry said. “From the Penthouse of the USC Building downtown to a 3,000-person event Sunday at the Jet Center hangars in Hawthorne, as well as a tailgate concierge event for 700 people at SoFi Stadium on Sunday,” she said, from her office in mid-city Los Angeles.

You can also catch Liese Gardner at Catersource + The Special Event during her session, How to Master Online Writing & Get More Sales, being held Thursday, May 5 at 1:00 p.m.

The unification of these three catering companies, from very different areas of the country, reflects the camaraderie that has been developed over the years through conferences and professional events together. Organizations such as Catersource, the International Caterers Association, and The Special Event have been instrumental in helping these entrepreneurs build bonds that have lasted decades.

“These events are exhausting as there are many moving parts especially working with sponsors,” said Parry, “but at the end of the day, when you have probably had 100 moments of problem solving, when it is received successfully there is a great sense of achievement and satisfaction.” 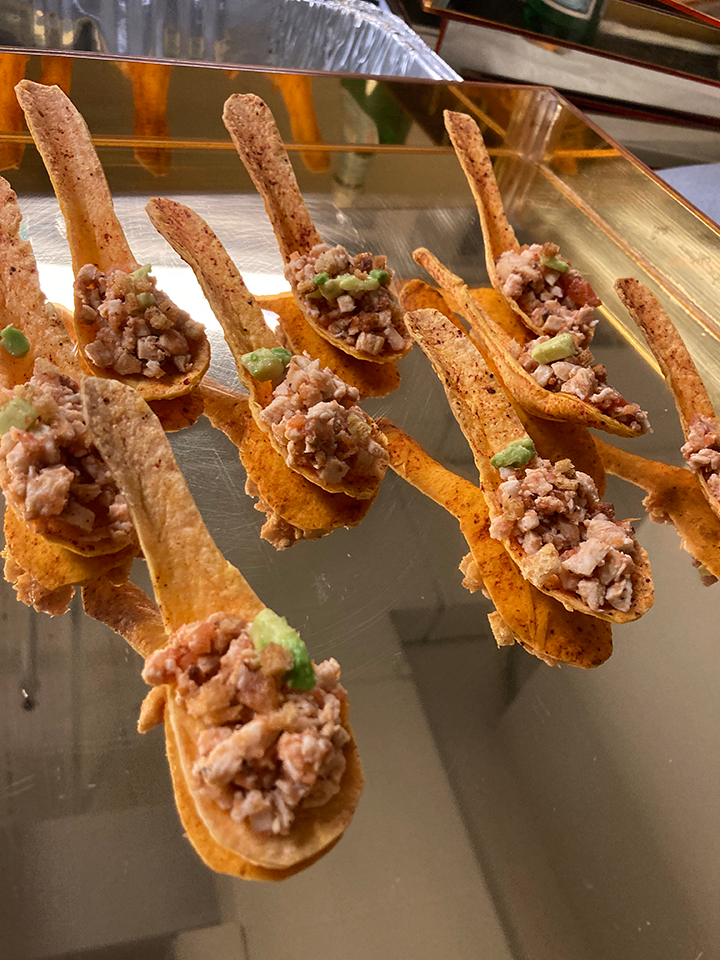 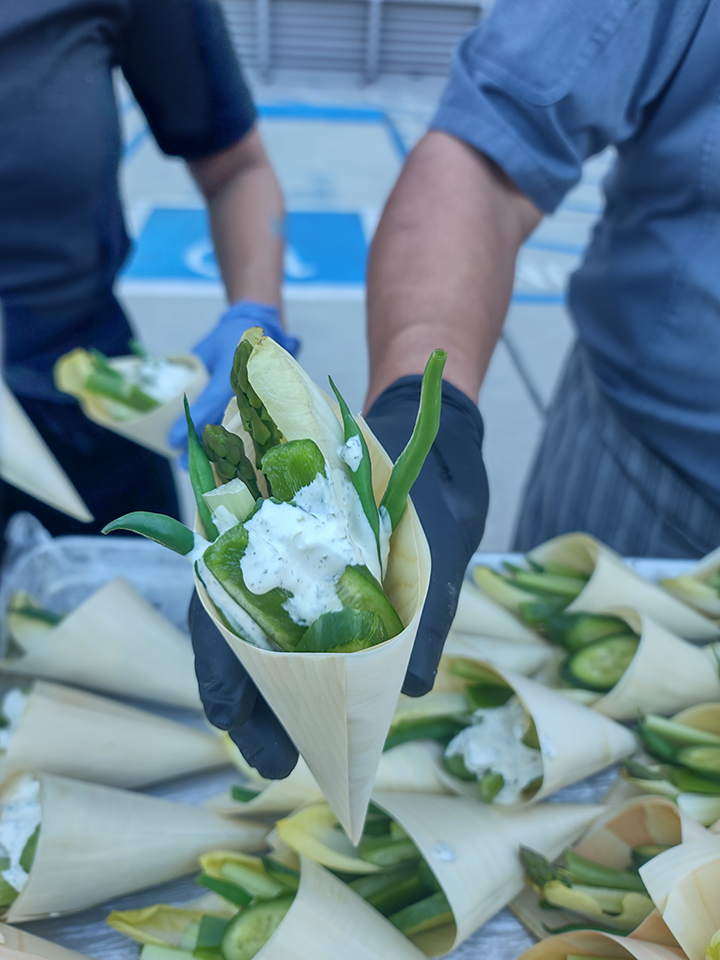 Shades of Green Crudite with a Green Goddess dressing in shaved wooden cone. 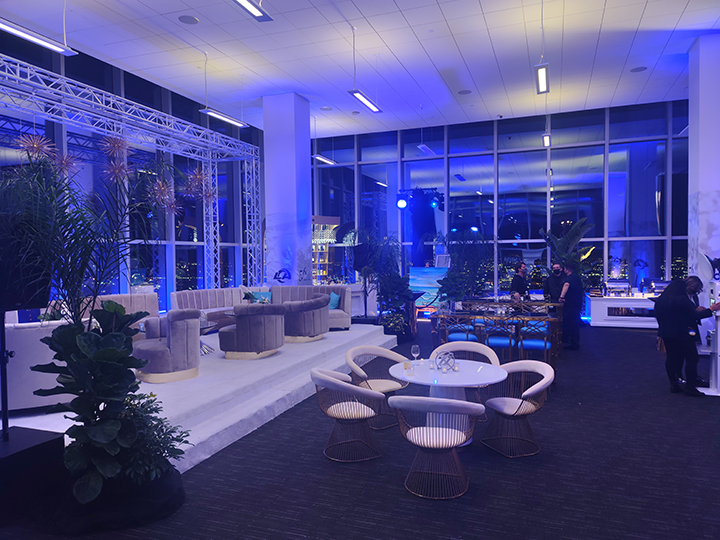 The Penthouse Rams Hospitality Suite with a 360-degree view of Los Angeles. Guests could come and go all day long from breakfast to dinner. 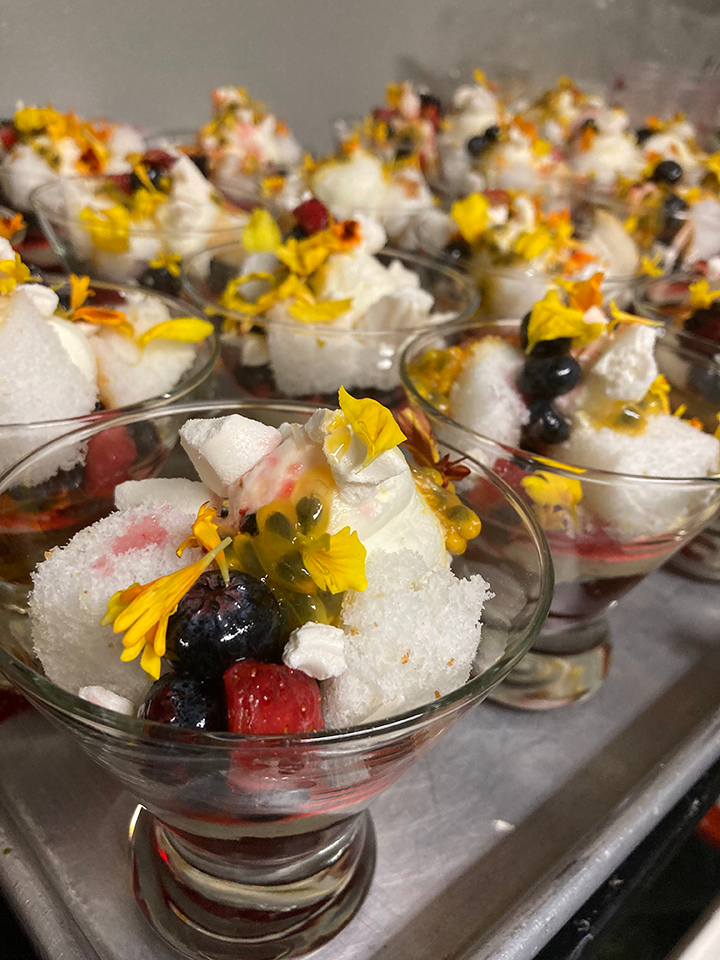 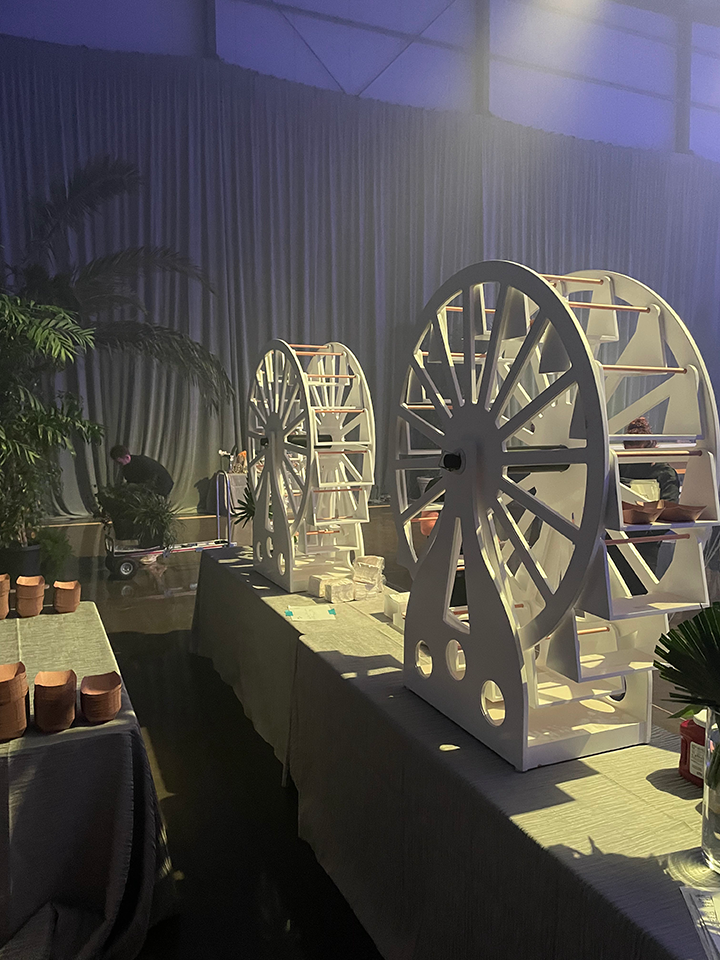 The team’s interpretation of the Flavors of Santa Monica at the post-game event, where they served corn dogs, the famous Father’s Office burger and the Bay Cities Godmother sandwich. Whimsical ferriis wheels helped serve the items. 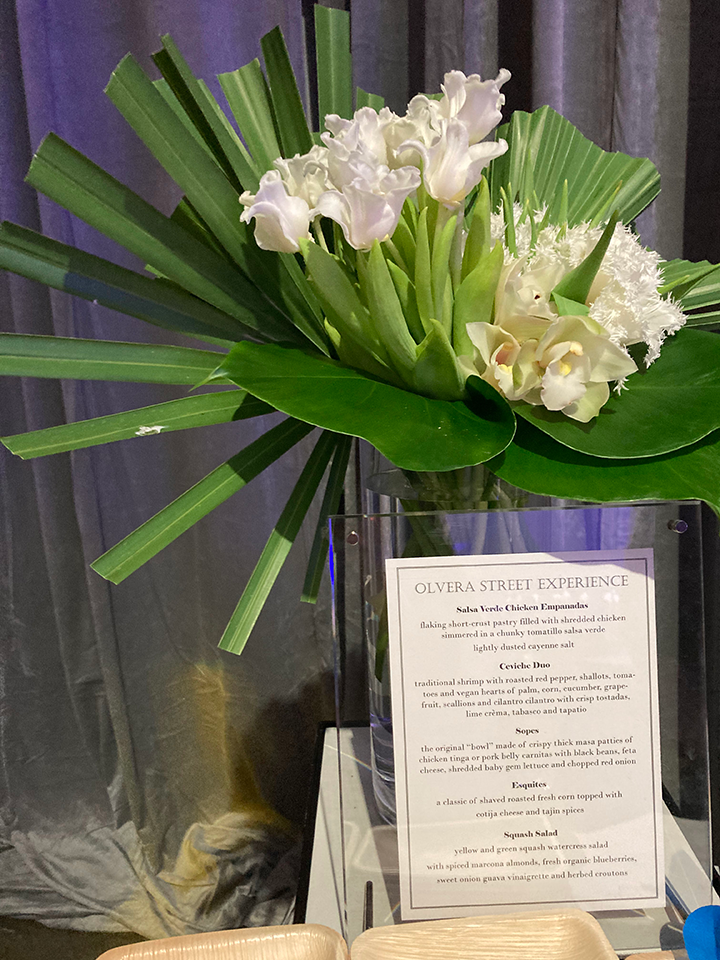 One of the food station at the Taste of LA post-game event. 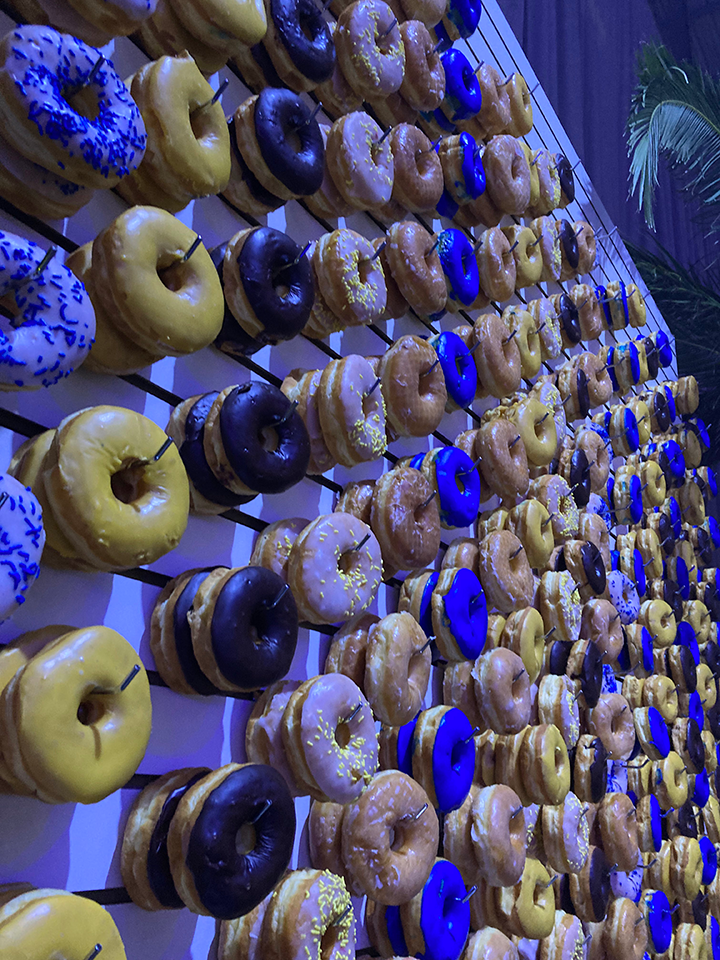 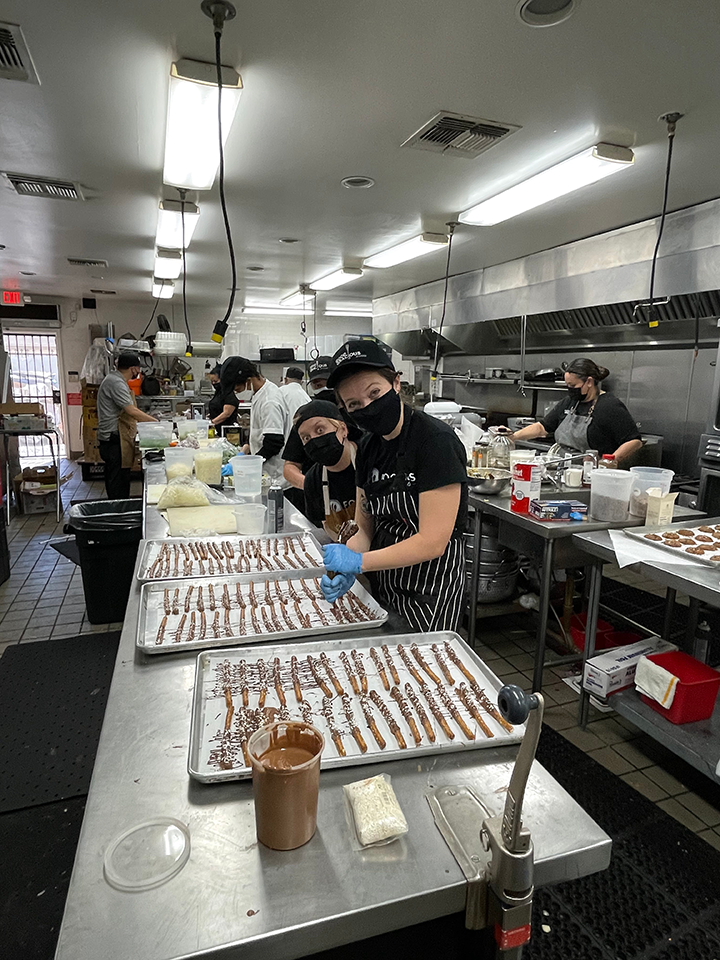 Behind the scenes at the Good Gracious!  Events kitchen. Here, the team from Footer’s Catering makes chocolate dipped pretzel sticks. 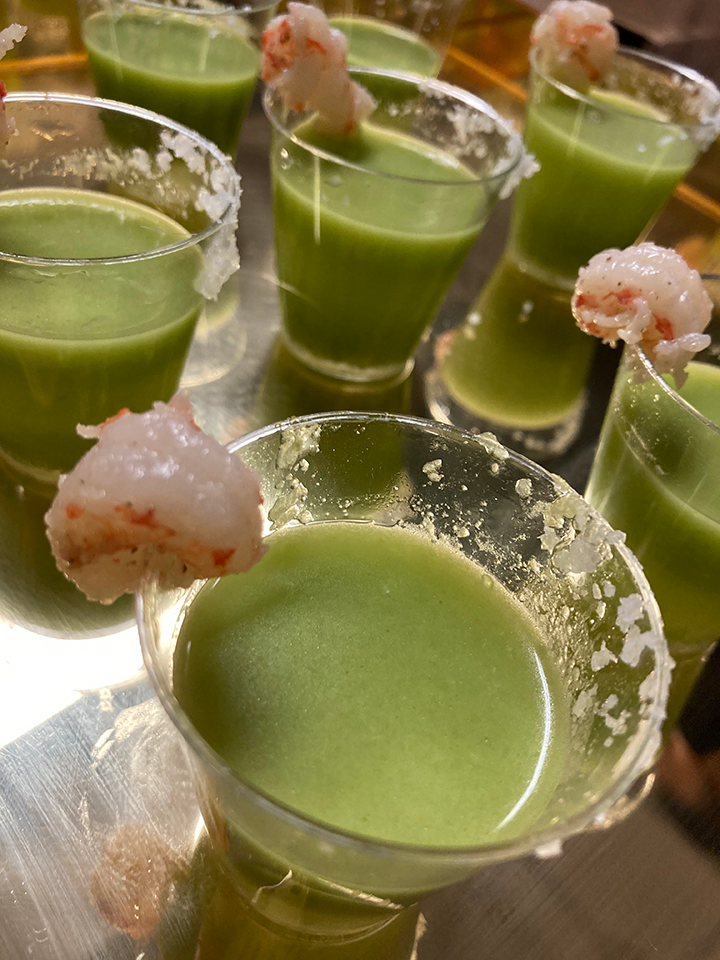 Sweet Pea Shooter with Shrimp with a half Lime Salted Rim. 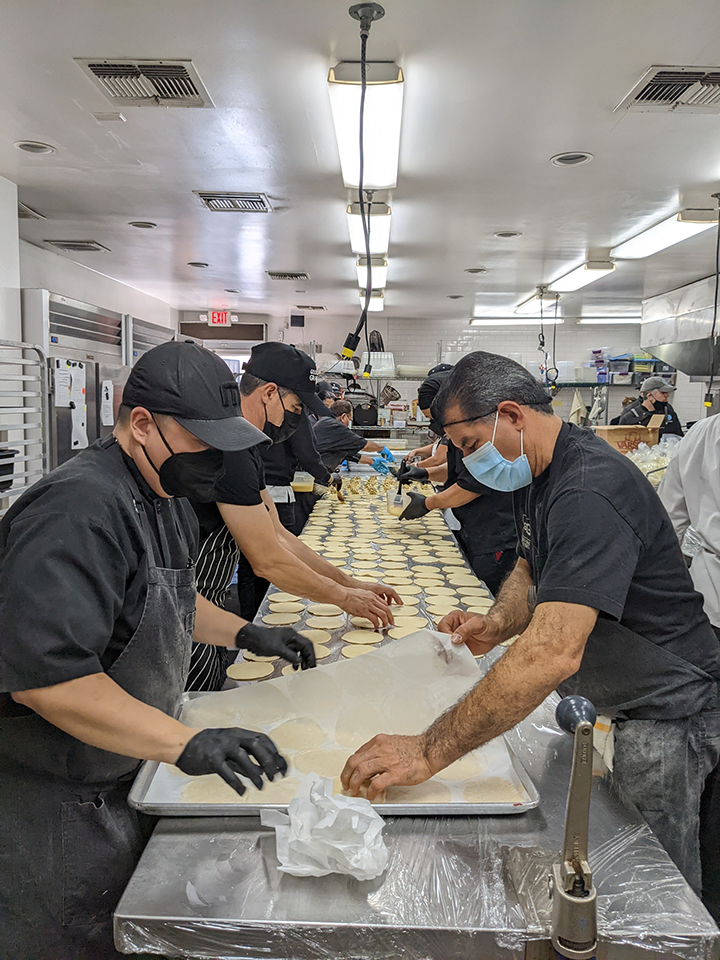 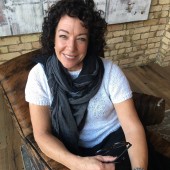