You (Yes, You!) Can Donate Event Leftovers

Members of New England NACE did some research and discovered that liability isn’t an issue. Now they encourage local venues and caterers to donate surplus prepare food to local food rescue operations. Here’s how you can do it, too. 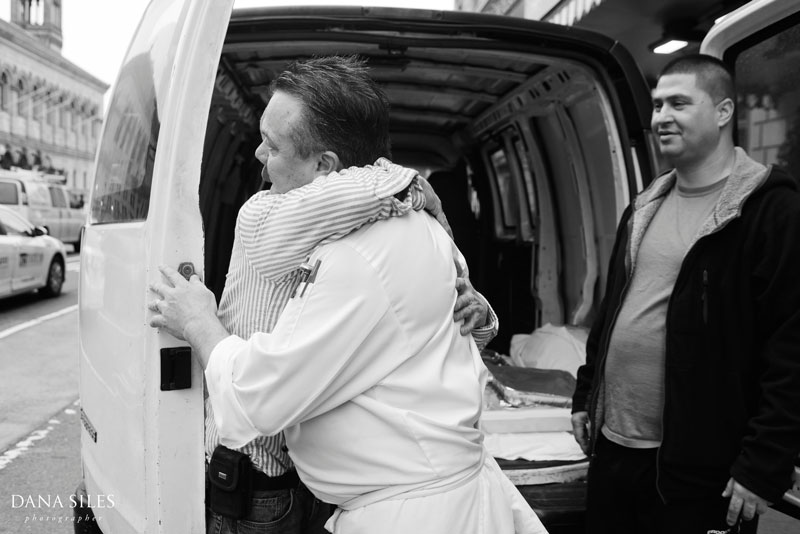 Does this sound like your typical Saturday night? You and your crew are deep into kitchen cleanup, long after the last guest has nibbled at the last bit of dessert. Now you’re facing the inevitable question: what to do with the leftover food? You might have platters of cheese and crackers from the cocktail party, or several untouched plated meals from no-shows, or a mountain of desserts from a crowd that just wanted to get home early and didn’t linger over after-dinner coffee and sweets.

Read our lips: You CAN donate surplus food
In many parts of the country, all that perfectly edible food is tossed right into the trash or compost bin. But in the New England area, events professionals have an alternative: at the end of the night, they call one of the food rescue operations they’ve met through the New England NACE Feeding our Neighbors initiative. They arrange a pickup of surplus food that night or the next morning. Add some plastic wrap covering and do some quick storage or loading, and that delicious leftover food can become part of a wholesome meal for food-insecure neighbors.

If you’re thinking: It can’t be that simple! There are liability issues! The answers are: yes, it usually is just that simple, and no there aren’t any liability issues, not since the 1996 passage of the Bill Emerson Good Samaritan Act, which provides one national standard to allow good-faith donations of apparently wholesome food without fear of liability. The sad fact is that even though this law has been in place for 20 years, many people in our industry don’t know about it. In a survey conducted by America’s Second Harvest, more than 80 percent of respondents said the threat of liability for food-related injuries was the greatest deterrent against donating excess food.

“This act offers very strong criminal and civil liability protection for food donors, as long as the food is donated in good faith to a nonprofit,” says Christina Rice, Advisor to the New England NACE Feeding our Neighbors Initiative and clinical fellow at the Harvard Food Law and Policy Clinic. “This issue has been researched in depth, and there hasn’t been a single case that involved food donation-related liability or any attempts to get around the protections offered by the Bill Emerson Act.”

Asking questions, making a difference
There are people who hear the accepted reasons for a lack of action and do nothing about it. Then there are women like Naomi Raiselle and Dana Siles. Members of New England chapter of NACE, they’re co-founders of Feeding our Neighbors, which has saved thousands of pounds of potentially wasted surplus food. Thanks to their efforts and those of venues and caterers all over New England, they’ve been able to donate wholesome meals to grateful food rescue operations.

“More than five years ago, we had a conversation about the huge volume of gorgeous food we saw being thrown into the trash after events,” Raiselle says. “We decided to start asking questions, and were stunned to learn this law had been in place for so long, and that as long as food is what is termed ‘apparently wholesome,’ it’s fine to donate.” (Quick test: Ask yourself if you’d feed this food to someone you love. If the answer is “yes,” please go ahead and donate it.)

As Raiselle and Siles dug deeper, they learned that 18 percent of children in their area were food insecure. “Your image of those in need might not fit with reality,” Siles says. “Often, it’s single parents who can’t afford to purchase the kind of great, fresh food you are able to serve your clients. They would very much appreciate an opportunity to give their kids a meal from your delicious leftovers.”

As the project began to move forward, Raiselle, Siles, and other chapter members contacted food rescue operations and found several who were willing and able to transport surplus food. When they started doing the math, they realized the extent of help they could offer. “You might think, I only have 10 or 15 extra plates of food from this wedding, but those extra plates are multiplied at more than 1,700 events in New England alone, every weekend,” Siles says. “I’m a photographer, so I like to tell people they need to look at the issue with a wide angle lens and realize the difference we could make if everyone donated.”

Here’s an example of the impact of this effort. After a snowstorm impacted attendance at an event, the Fairmont Copley Plaza Hotel in Boston had a significant amount of surplus food. They contacted the Boston Rescue Mission and donated more than 20 trays of grilled chicken, salads, and vegetables. “We serve more than 120,000 meals annually, at a rate of six meals per day, so every food donation means a lot,” says Eric Grenfell-Muir, manager of information at the mission. “We were thrilled and grateful.”

Tips for implementation
Research up front: If you’d like to get started with a similar initiative through a professional organization in your area, conduct initial research and outreach to determine which area food rescue operations have the capacity to pick up fresh and prepared food donations.
Connect in advance: It’s important to establish contact before there is any food to donate. “The goal is to form an on-going relationship,” Siles says. “It will take two or three surplus food pickups before this process becomes a well-oiled machine.”
Add food donation to your contract: “Every event professional, not just the caterer, can ask for a line item about food donations to be included in their contract,” Raiselle, a videographer, says. “I always ask, and I’ve never had anyone say no.”
Consider the tax credit: “If you’re a caterer working on a contract with a venue, it is important to note who actually owns the surplus food,” Siles says. “Only the one who owns it can claim the donation credit.” Enhanced Tax Benefits, up to 15 percent of the donated food’s value, were put into place in 2016.”
Ensure freshness: It’s important that food not enter the danger zone, and for this reason, Raiselle and Siles both suggest investing in holding and transporting products that can keep food safe for up to 24 hours.

Moving forward
Finally, both women suggest that everyone in the events industry begin talking about this issue. “This whole thing began with a conversation,” Siles says. “The more you keep talking about it, the more we can make a change. It’s sometimes challenging for people to make a change in the way they do things, and yes, it’s time-consuming at first, but donating is completely worth it.”

“People who donate on a regular basis experience such a sense of joy and rightness,” Raiselle says. “They tell us: ‘We have all this amazing food, and now we’re able to get it to someone who needs it.’"

“I’m shocked that it’s not an industry standard to donate food whenever possible after an event,” says Kelly White, chairwoman, SEARCH Foundation, which assists special event professionals faced with life-threatening illnesses and catastrophic life events. “I believe most people, like me, assume there is some risk involved. After hearing Naomi Raiselle’s presentation at a New England ILEA meeting, I now realize that isn’t true.”

Siles and Raiselle hope their efforts will gain traction with NACE and other professional operations nationwide. “Feeding our Neighbors started as a New England initiative, but it’s an industry wide effort,” Siles says. “We have the ability to make a huge difference on this issue,” Raiselle adds. 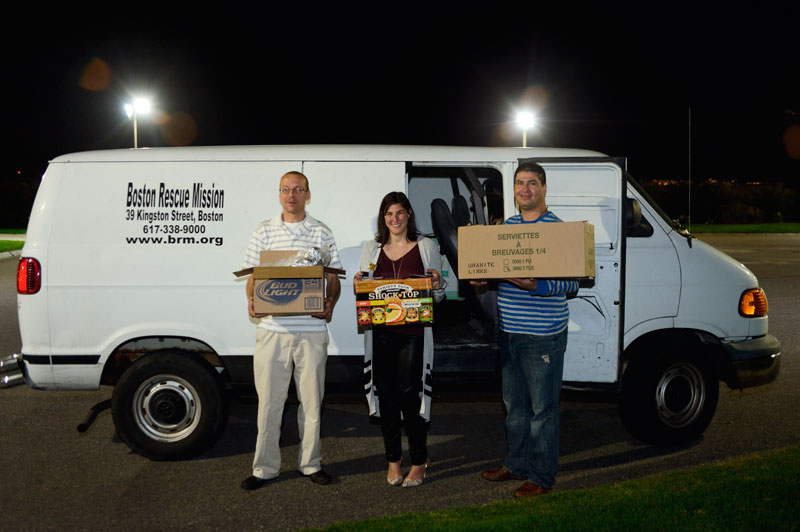 Michelle Reid, Director of Sales & Catering for The Tavern at Quarry Hills & Granite Links Golf Club pose with the staff of Boston Rescue Mission during a successful surplus food pickup after a New England NACE meeting 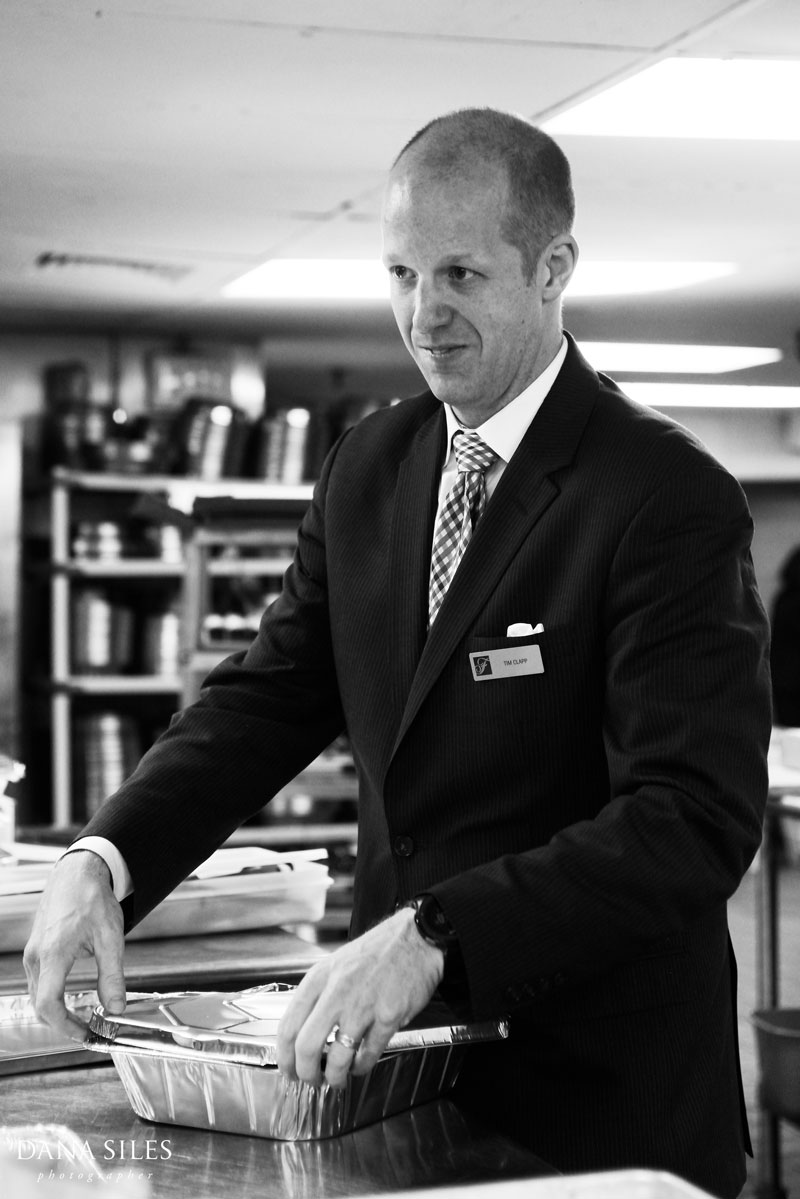 Chef David Blessing and his staff prepares surplus food after the High End Bride event at Longwood Events’ The State Room in Boston,MA 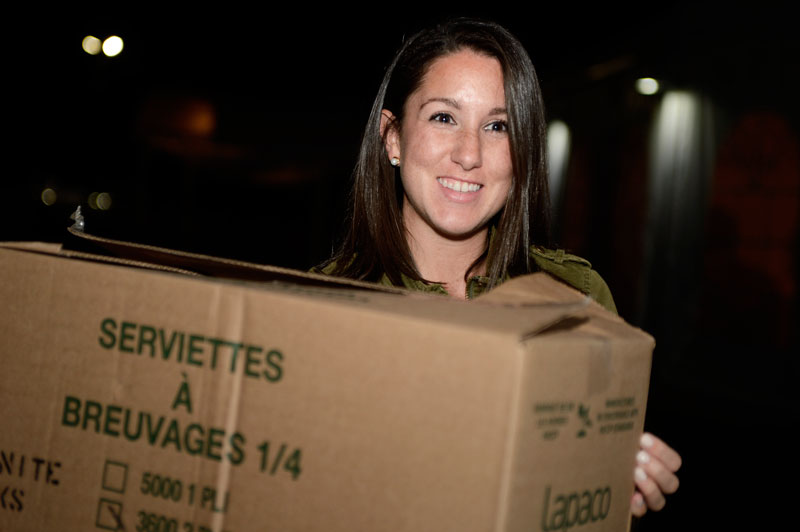 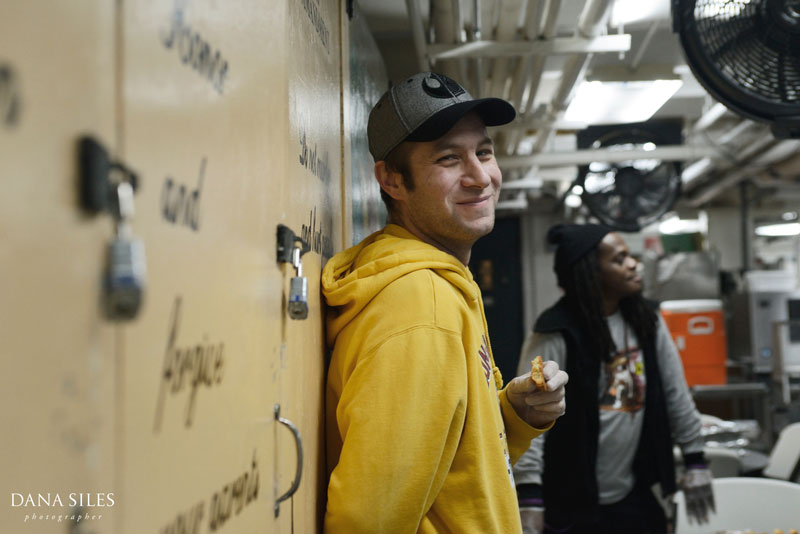 Smiling faces at Boston Rescue Mission after receiving a yummy leftover from the Fairmont Copley Plaza in Boston, MA