Working conditions on movie sets are notoriously long and challenging: 16-hour days, often on location in remote areas with nary a break. With so much time spent on set, many of the cast and crew often find themselves in need of a caffeine jolt or other rejuvenating comestible,  without an opportunity to leave to satiate their cravings. If they cannot get to the food, the food must come to them. Enter craft service. 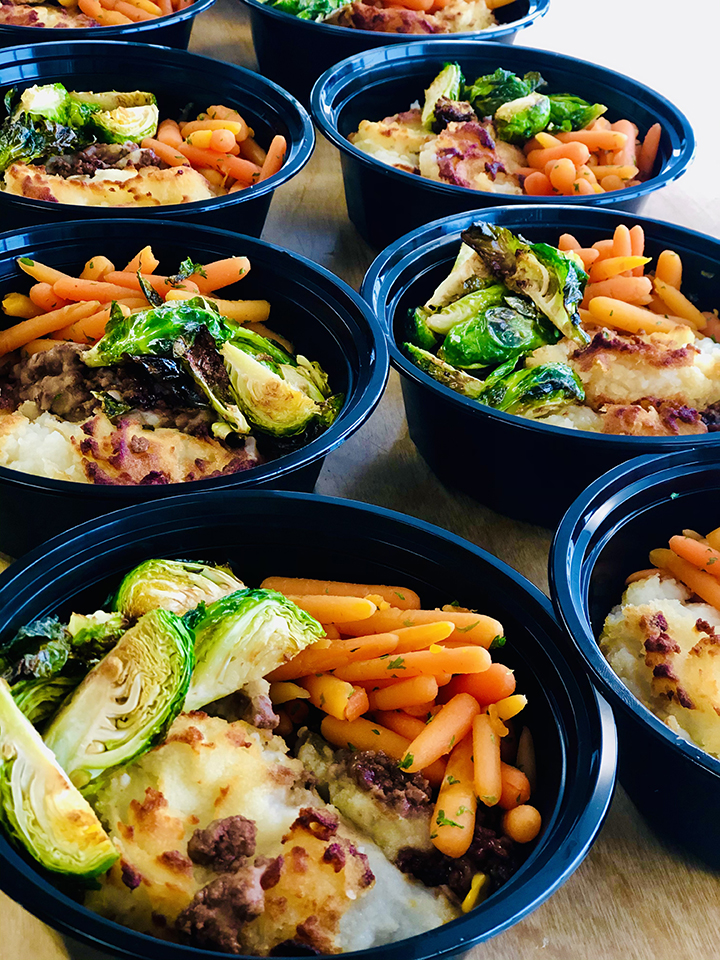 Craft service, oftentimes referred to as “crafty” is the all-day snack tables set up during production shoots for the “craft workers”—the grips, costume department, makeup artists, camera and lighting crew, etc.—to stay hydrated and fed throughout the day in between the formal meal breaks, which are typically provided by traditional caterers.

“They need to feed their people,” says Julia Kendrick Conway, owner of Assaggiare Mendocino, located in the San Francisco area. “The food is really important to those who are working on the set. Craft service is vastly different from event catering, though, it’s almost like a whole new language.” 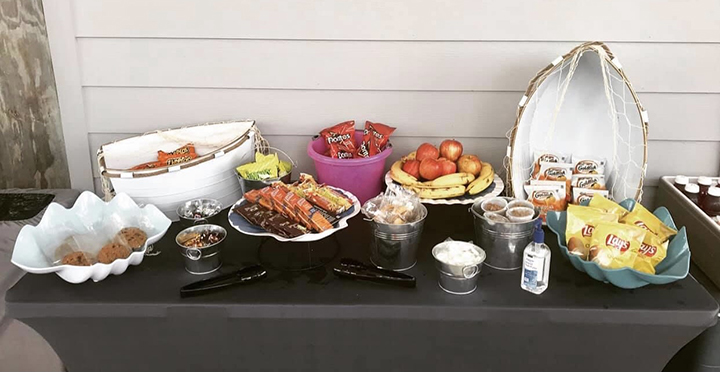 While catering is usually responsible for providing two large meals a day, the craft service staff must keep a plentiful spread displayed for the entire day, oftentimes in the middle of nowhere depending upon where the shoot is taking place.

“You need to make something mobile and available for people on set, so wherever you are becomes your place of work,” says Tom Krimminger, with MF Scratch Catering & Events. “While there’s still a catering aspect to it, you are more of a convenience store on set for whatever their convenience is; you are catering to what their needs are.

“I don’t recommend doing both meal catering and craft service because there’s no in-between time. You can do one or the other really well, so you can either be the hero, or you can be the one who takes on too much.” 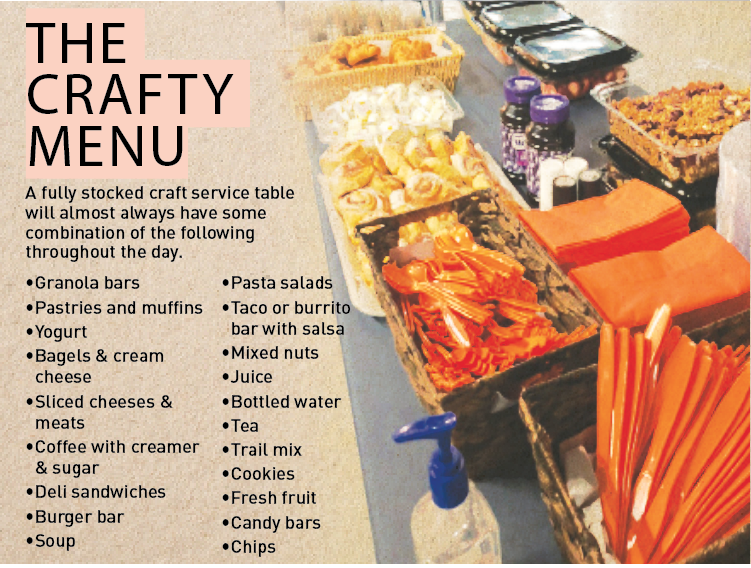 While some craft service providers may bring in a field kitchen onsite with them, it’s generally not recommended because there is too much likelihood of having to move to a different location, Conway says, so it’s best to prepare everything ahead of time in your commissary.

However, larger industrial film catering companies may set up mobile kitchens or food trucks onsite, but those companies typically travel with the production companies for longer shoots. “If there were food trucks in our locations, that would work but that is not the case in our market,” Conway says. “In larger, urban markets, caterers own food trucks for this purpose, but in California, a food truck must be associated with a permanent commercial kitchen site in order to be licensed, so generally they are not a cost saving idea.”

“You have to tailor your offerings in order to accommodate everyone,” Conway says. “The producer’s reputation relies on not ticking off the talent. It’s fun to look at a group of people and figure out what they’re going to enjoy eating and [then] knock their socks off.” 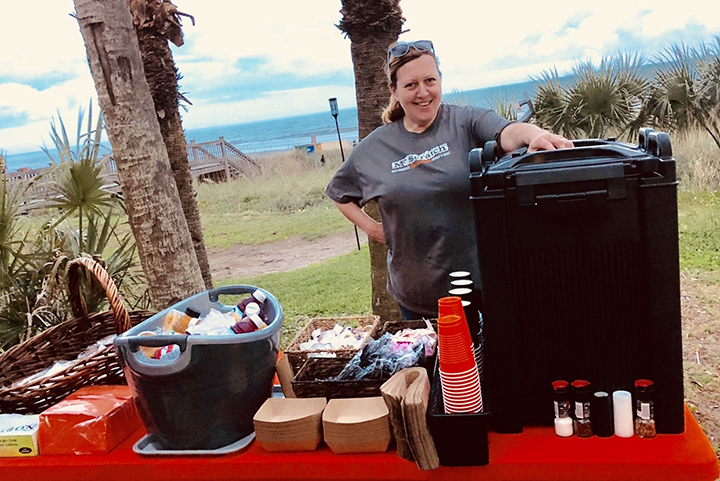 While some craft tables will rotate in some chaffered hot items, most of the food will be chilled or room temperature, such as deli sandwiches and pastries.

“You may have one group who loves healthy food,” Allison Krimminger says, “and then the next time they want just complete comfort food and sugary snacks.”

Regardless of the food, the most important element of any craft service table is the coffee.

“Coffee is the number one thing around the clock,” Allison Krimminger says.

While craft services can prep to some extent what they plan to prepare for any given service, nothing is ever set in stone. The Krimmingers have, for example, a few secret items stashed away, such as Red Bull, bandages, medications, and Mexican Coca-Cola. “Day one, you don’t know what you’re walking into, day two you’ve got it handled,” Tom Krimminger said.

Given that so many filming locations are in remote areas, caterers must get creative with how to keep the food and coffee hot.

“There is almost never electricity on site for us,” Conway says. 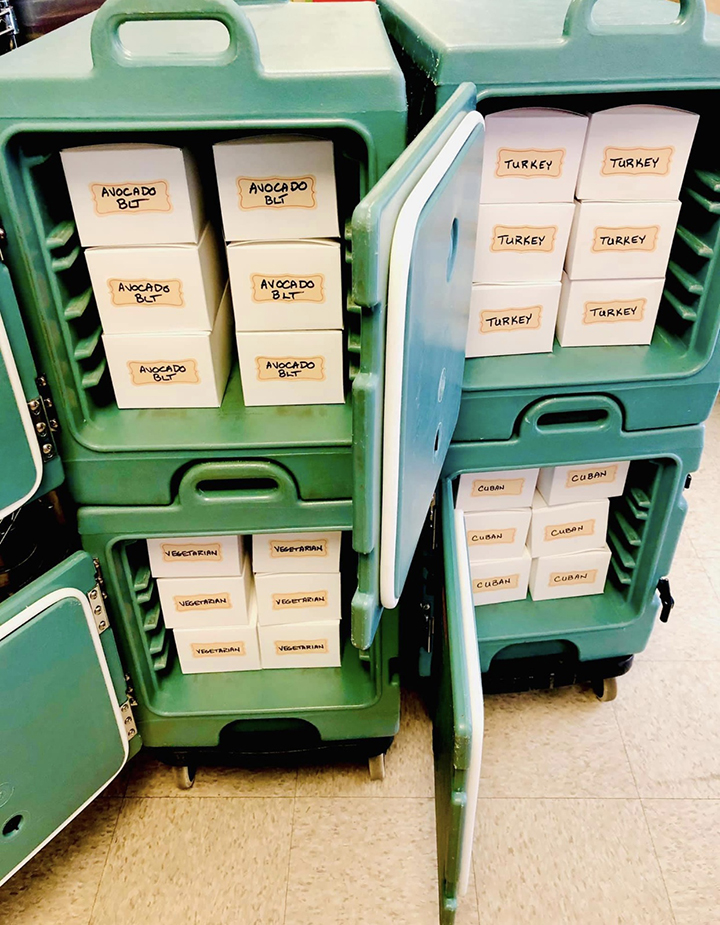 When working onsite, Conway says she uses traditional Sterno burners and chafers, in addition to Cambro transport boxes, and Cambro hot transport containers for coffee, which also include airpots for hot water for tea. Coolers are the key to keeping beverages and fresh fruits chilled.

“There are a lot of tricks about reheating foods and wrapping them in such a way that keeps everything in the transport box hot,” Conway says.

It’s also important to switch out food consistently throughout the day to safeguard against spoiled or stale food. Unfortunately, this also leads to a lot of food waste.

“Food that is either exposed on a buffet or held in the danger zone (40 degrees to 140 degrees) cannot be served, and must be disposed of,” Conway says. “But that’s why we have lots of innovative ways of keeping food in the proper temperature range. In some cases, we can leave-behind snack platters because they’re foods that are acceptable at room temperature.”

Another tip to safeguard against excess food waste is to prep food throughout the day, rather than all at once. For example, only slice a small amount of fruit at one time, and then replenish as needed.

The craft service table is much more than food; it’s the equivalent of the company watercooler where people congregate throughout the day to chat. One could even argue that the craft service crew is responsible for the physical and mental well-being of the entire set because if there isn’t coffee and the food is stale, overtired people tend to get cranky.

“The number of people that are going to be on set at any given time varies,” Tom Krimminger says, “but everybody will visit the craft service table at some point.”

Craft service comes with its own set of unique challenges, such as contending with the elements, early call times, long days, and combating insects and wildlife.

“We’re out there, rain or shine,” Allison Krimminger says, “so, you can’t be a wuss about the elements.”

“We can be awake for 36 hours in a row and still function at a good quality level,” Tom Krimminger says. “But, a few days after that we’re useless.” 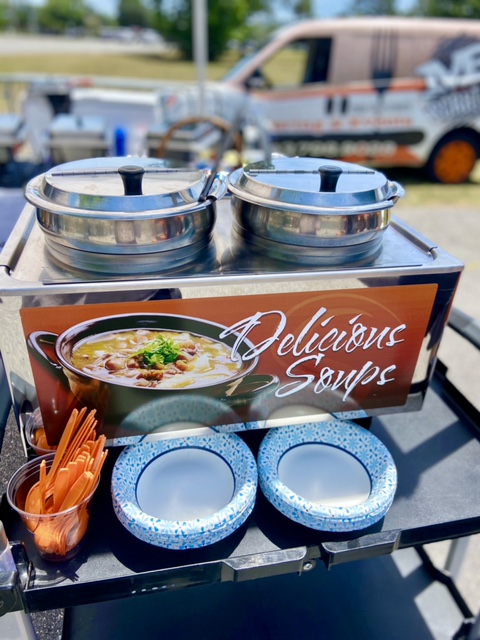 However, not everyone is cut out to work in craft service. “We seem to thrive on it, while some people don’t like that,” Allison Krimminger says.

Conway agrees. “There’s a certain amount of satisfaction to craft service because you know that they can count on you even out in the boonies,” she says. “But it’s hard work, even if you have a groove that works for you. It isn’t for everyone.”

One such caterer, North Dakota’s Homegrown Elegance, provided craft service for a commercial shoot where everything was constantly being upended.

“That was a never-ending moving target, they would change everything at a moment’s notice,” says Senior Event Coordinator Carl Clemetson. “Schedules are not schedules—they are suggested times. The whole experience is a blur, and I’m probably going to avoid craft service like the plague going forward.”

Breaking into the biz

The best way to get started with craft service is to form a relationship with your local film officer, Conway says, because they are often the first point of contact for the location scouts. They can also answer a lot of your questions about craft service and “help you crack the code.”

“We love the adrenaline and chaos of it honestly,” Allison Krimminger says. “It’s fun and unpredictable.”

One of the most essential elements to keep in mind if you are thinking about tapping into the craft service market is how to properly price. Conway says she recommends quoting labor, equipment, disposables, and food separately.

“If [a company] just gives a per person cost for all those items together, it will be more than the production company’s per diem for food, and this is why most people don’t get the jobs,” she says. “Each production company does it differently, so you have to be willing to ask questions and adjust your quote process to them rather than expecting them to adjust to you.” 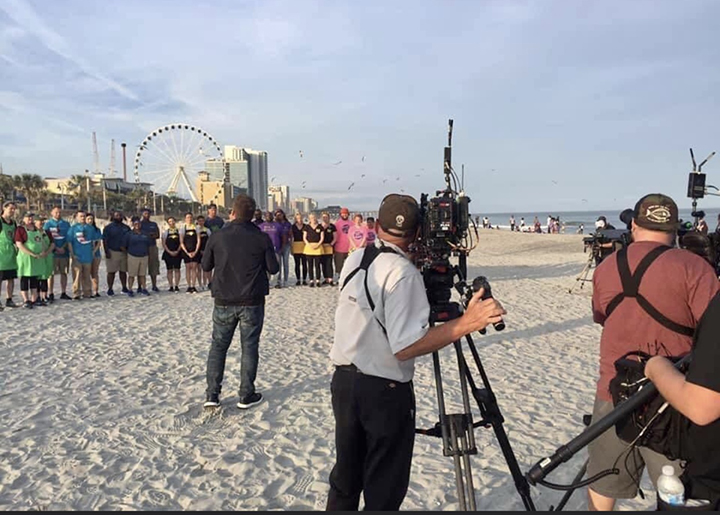 Working in craft service is an experience like no other, Conway says. “You’re talking with the hair and makeup people and getting a behind the scenes look at how all of this is done. You have to be a little bit of a movie geek to really enjoy doing it because you get to see them differently than how you would in the finished product. But occasionally you do get to see a celebrity.”